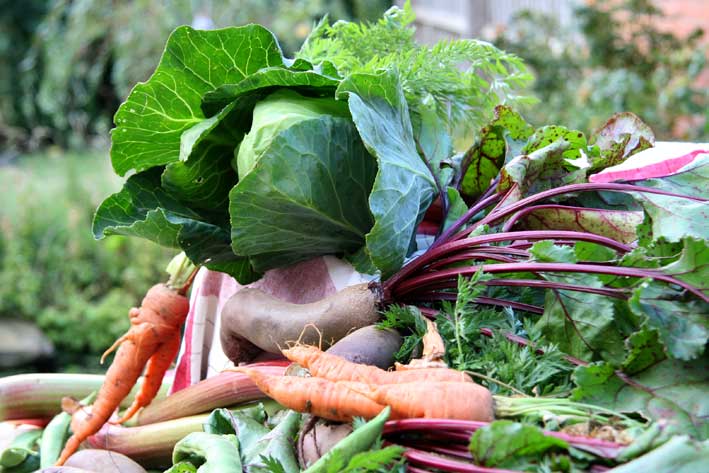 While talking to my stepfather, Joe Festerling, the other day, we got onto the subject of organic vs. non organic food, and the wastefulness that goes on in the grocery stores. Joe grew up in Hamburg, Germany, and recalled going to the open markets as a little boy to get the family food for the week. At that time they did not have much money and no transportation to get to the bigger marketplaces, so most of the time they either walked or rode bikes to the local markets. He said he would bring back home a basket of fruit and other produce and his mother and aunt would smile and say, “Wunderbar! This will make a great meal.”

There would be blemishes and bruises, and things would be soft and a bit mushy, but their meals would still be great. He told me he really never knew they didn’t have much. One of the best things he loved to eat would be fried bananas. His mother would peal the BLACK bananas and fry them up. She would make bread with them and so many other desserts. It was not until he was much older that he learned that these were the bananas that were old and left over, just like with the rest of the produce they got to eat. Back then you made due with what you had.

He is always amazed at how people will ignore the very ripe things and not want to cook with them. They throw out vegetables that are not perfect because they think they might be bad. When I used to hand-raise parrots (in another life), I would go to the grocery store and get the old produce. Some of what they were going to throw away was amazing. My birds ate really well and I totally understand what Joe was trying to say. But I also have to admit I too would toss out certain things that were past their prime.  I read somewhere that some grocery stores are now looking to sell produce that is not perfect at reduced prices. Might not be a bad idea.

We need to make an effort to use up the food we buy at the store or grow ourselves. Just cut out the bad parts and enjoy the taste. Find new recipes that you can adapt to use up those older tomatoes with blemishes on them. Toss them into a pot of stew. Cut out the little spots on your berries and apples. It won’t hurt us to eat the rest. I’m sure, like me, you have heard these kind of stories from your parents and grandparents many times, but it took Joe telling me about his experience in Germany with the bananas to really get me thinking about how much I waste at home. He told me if he ever wrote a book about his childhood he would make the title: “I Never Knew Bananas Were Yellow,” so I swiped the idea from him and shared his story with you today.

Joe has been a nurseryman his entire life. He came to America in his early 20’s and worked for my grandfather at Behnke Nurseries where he met and married my mother, Sonja. Later he started his own wholesale nursery in Howard County were he still grows and sells trees, shrubs and perennials to Behnke Nurseries.