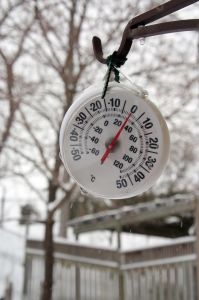 If warm temperatures have you planting early, you always run the risk of having a few nights when the temperatures approach or dip below freezing. If that is the case, we offer the following suggestions. This is weather as we horticulturists at Behnke’s understand it after years of experience protecting some of our newly-arrived plants in the garden centers and more tender plants in our nursery.

What weather conditions are the most likely to cause damage?

The colder and the longer the cold period, the more likely you will have damage. For already established plantings, this is mainly a problem if we are experiencing a rapid temperature drop after a warm spell. If it’s been consistently cool, then below freezing temperatures will probably not cause damage on established plantings, although flowers or young leaves may “burn.” Magnolias are notorious for this sort of damage: warm temperatures cause them to flower, then a cold night burns the flowers but the plants are fine.

On clear nights, objects lose heat to the sky — they radiate heat, and may actually become colder than the surrounding air. Frost may form even if the air temperature is above freezing. This is called a “radiation frost.” That is why you may see frost on your car in the morning but not on the warmer ground. When it’s windy, air movement prevents frost from forming and you have less chance of damage to the plants.  When it’s cloudy, there is less of a radiation effect, and objects don’t become as cold as they do on clear nights.  So the watch words are: cold, clear and no wind.

The possibility of damage depends on several things…

Plants displayed outdoors at Behnke’s are less likely to be damaged than plants that are displayed in greenhouses. The plants outdoors are more cold tolerant, and unless they have just arrived, are somewhat “hardened off.”

Flowers and new, young leaves are more likely to be damaged than older foliage.

New plants from the garden center that were grown in greenhouses are more tender than plants that were overwintered in nurseries outdoors.

Plants that were planted in your garden yesterday are likely more tender than plants you planted two weeks ago.

Plants that you put in last year probably are not going to have issues unless it is a particularly late freeze — say, mid or late April. Then, it’s flowers and young leaves that are susceptible.

• Where it was planted —

Plants in containers are more likely to be damaged than plants in the ground.

­­What Should I Do to Protect My Plants?

Cover the plants with a bucket or sheet (not a plastic bag, which is a poor insulator) to keep the frost from touching the plant. The soil is warmer than the air and the cover traps the slightly warmer air.

• For new plants in above-ground containers —

Just pull them into the garage or house for the night. They can go back outside the next day if the danger of frost is over.

• For established plants in the garden —

These should be fine. If the freeze is particularly hard and the plants are starting to bloom early, you may lose some flowers but not the plants.

If you have any questions or concerns please feel free to ask. We want your gardening experience to be fun not fretful.