This shouldn’t be a hard thing to do – finding somewhere to volunteer my services in the Metro DC area.  I’m hoping to put my knowledge of gardening to some good purpose, do it with other people, and be active without doing grunt labor.  Here where I’ve tried volunteering so far, and I’d love to hear your stories and recommendations!

Master Gardener programs are probably the top choice among gardeners with time to spare and the will to volunteer, and I think they’re great, at least the programs I’m familiar with in Maryland and Virginia.  But when I look at the actual projects that my local group is involved with, none of them really appeals to me.  I may change my mind but for now, the search continues.

Asking around among my gardener friends who are retired, I heard great things about volunteering with Kevin Conrad, a woody plants expert employed by the National Arboretum but whose research facility is even closer to me, in College Park.  The purpose of the facility is to grow trees and shrubs for conservation purposes – a great cause, and it’s favorite plant group! I’m even pals with one of Kevin’s regular volunteers – Wendy Bell, a knowledgeable gardener I know from Takoma Park.

So I visited, hit it off with Kevin, who was eager to put my pruning skills to use, and looked forward to my first day on the “job.”  That first day wasn’t a terrible summer day by local standards – humid but with temperatures in the low ’80s – but still, I arrived at 8 a.m., as early as possible.  I was taken to the growing fields with its row after row of trees and shrubs, given a full complement of pruning tools and an intern to work with, and I got to work.

Now I do love to prune, but it turned out this pruning task would be nothing like what I’d ever done before, because aesthetics were of no importance whatsoever.  The only thing that matters in this fields is keeping the plants alive, and pruning is only needed to keep branches away from the paths so the large lawn mowers could pass by.  But I was game.

Three hours later I was dripping in sweat and so tired I felt sick.  My hands were red and aching.  I begged off the fourth hour I’d promised and came home to shower and bed, waking shortly to feel itching all over my body.

Considering that I recently sold my beloved house and garden to escape the drudgery of maintaining it all and moved to a townhouse in Greenbelt with a manageable-sized garden, I can’t help but wonder about this volunteer gig:  What was I thinking?

But that’s not until fall, so I kept looking, googling for other outdoor volunteer jobs in the DC area and found one – as a roving docent on the National Mall. Not exactly gardening-related, but hey, I could be directing people to the Smithsonian gardens and nearby US Botanic Gardens.  And I’d always gotten a kick out of chatting with tourists.

So I apply, and during my interview with two sweet Park Rangers I find out that that roving job is just one of lots I could choose on the Mall – including working at my favorite memorial, and the favorite of many DC-area gardeners – the FDR!!  And oh, would I mind also working occasionally at the Jefferson Memorial?  That 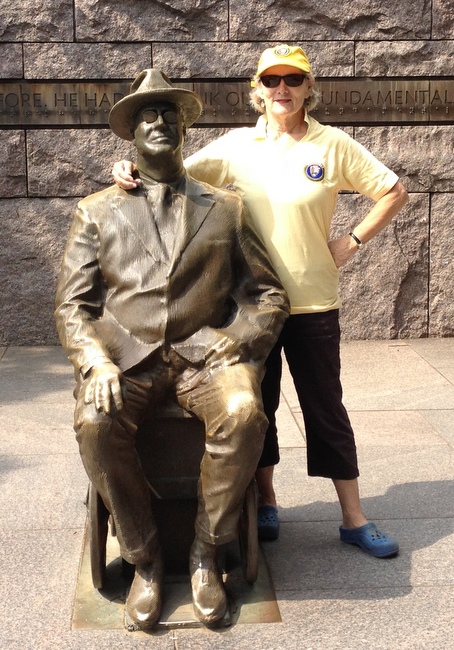 So this week I reported for “work,” suited up in the official volunteer shirt and cap, and headed for the FDR, where my first task was have this photo taken, and I find out this is a “slow” memorial.  So with two rangers there and two summer interns, no volunteers are actually needed.  At least on a weekday.  Waaaaah.

So I wander over to the Jefferson, where there are plenty of visitors, but they were visiting from Korea and wouldn’t be needing me or any other English-speaker to tell them about the monument.  I’m told that the Jefferson is yet another low-visitorship spot, so it doesn’t really need me, except during the Cherry Blossom Festival, when it’s so crowded around the Tidal Basin that some of the volunteers choose to stay home until things get back to normal.

So, where ARE volunteers needed because there are actual visitors?  Mostly two spots – the WWII Memorial and the Vietnam Veterans Memorial.  Not gardens – wars!  But I determined to keep an open mind and I met up with the dedicated volunteers at the WWII Memorial, but hearing them explain the details of the memorial confirmed that this isn’t the memorial for me.  Classical in style, and lots of “symbols of victory.”

There is one regular event there that I heard is so moving, it touches the hearts of even the most anti-war types – when groups of WWII veterans arrive, after being flown here to see the memorial by a terrific nonprofit organization. 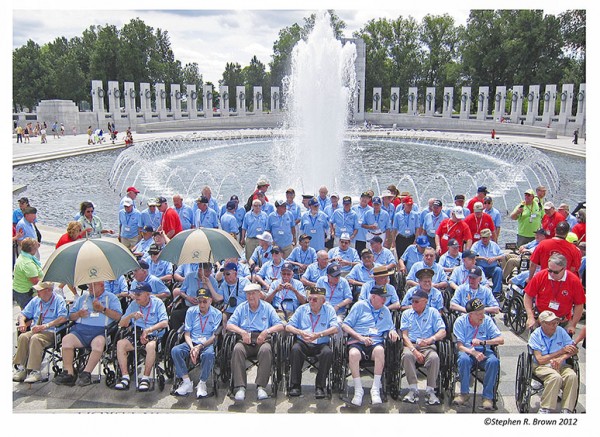 Here’s a photo of one such event by my photographer friend Steve Brown, who published a book about the memorial.  I can’t talk Battle of the Bulge with them but I can help in other ways, so I’ll give it a try. 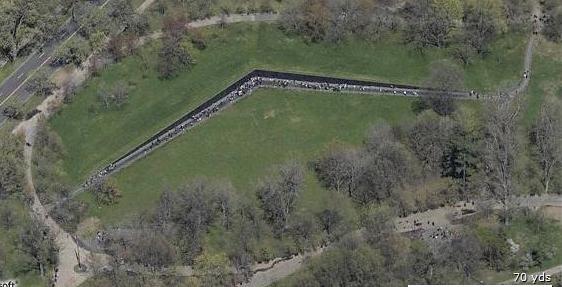 Finally, I strolled over to the most popular memorial in town – the Vietnam Veterans Memorial, which honors not war itself but veterans.  And while not really garden-like, it’s definitely a landscape-type treatment, much more to my liking, and it attracts mainly visitors from my generation and their kids.  We may have been on opposite sides of a very divided nation at the time, but there’s been lots of healing since then, something this famous “Wall” has contributed to.

At the Wall I found a job I can imagine doing and maybe, as one volunteer told me happens to everyone, getting addicted to.  Here I would be finding the names of visitors’ loved ones on the Wall, and helping them take rubbings of the name – 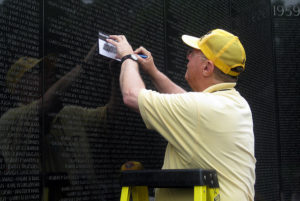 or in the case of names requiring a ladder to reach, actually taking the rubbing.  I’d be talking about the Wall, of course – the designer, the materials, etc. – but this place is mainly about the people who are remembered on it.

So maybe the Wall is my new home away from home – at least until I figure out how to scrounge up some visitors to listen to me talk about the FDR memorial and its world-famous landscape architect designer (finally chose after designs by exalted architects were rejected).  At least for now, my adventures in volunteering will take me outside the world of gardening, and that’s okay, maybe even a good thing.

SUGGESTIONS, PLEASE
So, any volunteers out there?  I want to hear all about it.