Gardening Basics: Simply Put, What to Expect in March 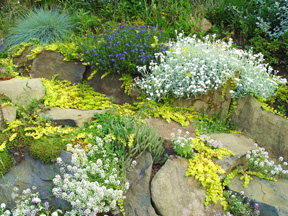 March: the month of the onset of Daylight Savings Time and the vernal equinox. “In like a lion, out like a lamb,” etc. As your gardening interest starts to revive like sap in a sugar maple, what is there to look forward to at Behnke’s in March? March is sort of a funny month, very weather dependent. Right now, it’s cool and soggy with the moisture left from the melting glacier. In two weeks, it could easily be 70 degrees. With that in mind, we horticulturists are now ”ramping up.” Staff that we haven’t seen since Christmas is coming back to work, and the trucks are rolling in.

Houseplants are already in good supply, and we are unpacking and setting out hardgoods as fast as we can. Hardgoods are everything without roots: bird-care products; seeds; warm-weather bulbs such as gladiolus; all those labor-saving tools; ceramic containers; fertilizers and so on.

March is the month when we go from a few thousand woody plants (shrubs, trees) on hand to tens of thousands. The first trucks of new woodies are due this week, and after that it’s more or less daily shipments for the next three or four weeks. Perennials—remember, the plants that more or less die back to the ground and come back the next year if everything goes right, lag a bit behind woody plants.

Depending on weather, the most cold-hardy perennials should be on display by the weekend of the 20th—yarrow, hellebores, dianthus, some of the Stepables, and so on. But perennials really kick into gear the last week of March and the first two weeks of April.

Annuals (“flowers”) and vegetables and herbs arrive throughout March as well, with cool-season vegetables like lettuce and broccoli. As soon as we have the first warm day, we have folks coming in for tomatoes and geraniums. They can’t go in the ground until mid-April and even then that’s risky. But there will be plenty of cool-weather plants that are appropriate to plant for the early-birds; blooming pansies which are really the best annual for early spring color. Stop by often, you will see big changes from day-to-day. March is just that kind of month.