Mistakes in watering are the number one cause of plant death in the garden! So read on to avoid that fate for yours. 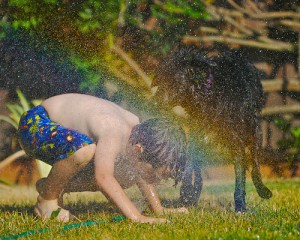 Thoroughly, deeply, and slowly, as needed – rather than shallowly. For example, a new shrub needs at least three gallons of water directly to its root zone after planting.

Watering it at just the surface will do more harm than good, causing roots to grow close to the surface. Use the “drench” setting on your hose nozzle, or remove the nozzle and just point the hose end around the base of the plant. Soak the soil to a depth of 4 inches.

Plants that are bought or moved in the spring or summer need serious coddling until their first winter just to keep from them dying in the heat and drought. (What may seem counter-intuitive is that it’s not the cold that kills plants, but heat and lack of water.) Other plants that need frequent watering are those in containers, and most annuals. Most garden plants, especially if they’re chosen for drought tolerance, require supplemental watering only during long droughts.

One more exception? Plants located under roof overhangs where rain can’t reach them, and we forget to water them when rain is plentiful. So just like pots sitting on porches under the roof, plants situated under overhangs anywhere need attention no matter how much it’s raining.

Plants in containers need to be watered far more often – usually every day and in really hot periods, even twice a day. (Depending on the plants, of course. Succulents are a great choice for containers that don’t need much attention.) After years of filling and carrying watering cans out to my deck, where most of my containers are located, I finally had a hole drilled in the deck for threading the hose from the spigot below and voila – watering is suddenly easy!

Did it Really Rain? 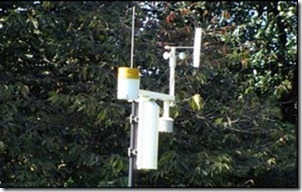 One common mistake is assuming that because some rain fell from the sky, you don’t have to worry about watering. Even five-minute thunderstorms give people the false assurances that they needn’t water. Wrong! Especially after periods of drought, it takes long rains to penetrate to root zones, and if in doubt, poke a few inches down in the ground to check for water. Or try one of those stick-type water gauges. Alternatively, to find out at a glance exactly how much rain fell, get a rain gauge! Notice in this photo of the White House kitchen garden they use a rain gauge, as well as other weather-measuring devices. (Rain gauges cost as little as $4!)

Written by garden writer and gardening coach Susan Harris, with input from Behnkes experts. Top photo by Bbum via Flickr.