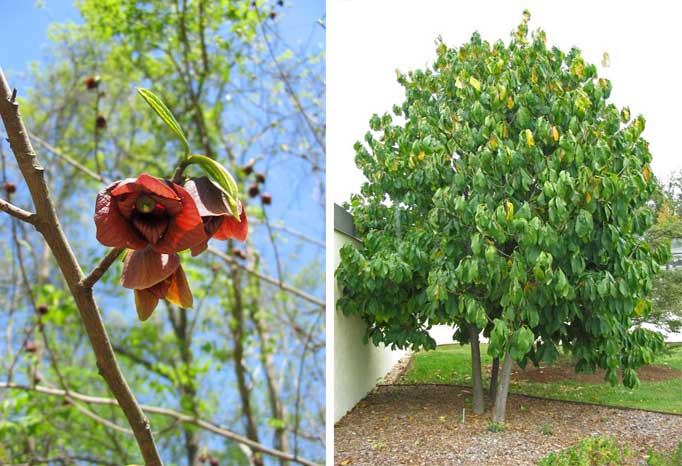 Ok, so I’m the unofficial crusader of Pawpaw here at the nursery. How did I become so enamored with this obscure fruit? It was gradual…I often raised butterflies when I was a kid (heck, sometimes I still do) and the holy grail for me was the elusive Zebra Swallowtail, a beautiful butterfly that, like its namesake, is black-and-white striped with long tails. These butterflies only feed on Pawpaw as caterpillars, and thus if I were to raise any I’d have to be able to identify pawpaw in the wild. Well, I never really did get my hands on Zebra caterpillars or their host plant then, but in college one of my professors had leftover pawpaw saplings from some experiment or other and let me have a couple. I planted them in my parent’s backyard where they have thrived now for about fifteen years. Although we still don’t see any Zebra Swallowtails in our area (populations can be localized due to the scattered availability of pawpaw in the woods), I have been able to get a small harvest from them. I’ve read up on the fruit since then, learning that they are very nutritious but have a very short shelf life – hence why you won’t see them in a grocery store and rarely at a farmer’s market. Chemical components in pawpaw trees are even being studied for potential cancer-fighting properties, and herbivores rarely bother the trees because apparently the foliage tastes bad. Flowers can be showy if you know what you’re looking for, though from a distance they’re hard to notice because of their dark color. Don’t worry about the fact that they are pollinated by flies and beetles…you won’t smell anything from the flowers yourself (at least, I never have, even by sticking my nose in one). Anyway, if you plant pawpaw for fruit, you’re going to need two or more trees for cross-pollination. What I love about them is they’re very shade-tolerant (in fact, full sun can be stressful for them) and that makes them one of the best cropping plants for shady spots.

For ornamental uses, pawpaw certainly has its place. Leaves can grow quite large (I’ve seen trees in total shade get leaves 12” long) and give the garden a nice tropical feel. Autumn turns them a beautiful golden yellow and bark is an unobjectionable smooth gray-brown. Deer won’t be a problem (unless they choose to antler-rub on the trunk), though several wild mammals like to eat the fallen fruit. So long as the soil isn’t excessively dry or swampy-wet they’ll be fine, and in summers with dry spells such as this year, so long as they get a fair amount of shade they should be fine with minimal attention. Happy trees can sucker a bit, but won’t invade the yard. Growth rate isn’t too fast (maybe 1’ per year, often a little less) but my 15-year-old tree is probably about 20’ tall. I have seen a few nicely-aged trees in the wild around 30’ tall, but most garden specimens can be expected to reach 15-20’ in a couple of decades, similarly-paced with other small trees like Redbud or Dogwood. Fruits will appear when the trees are about 10’ tall or so; they don’t fruit as young as “conventional” fruit trees because they aren’t grafted. Though there aren’t nearly as many cultivars on the market as there are other fruits, some have been developed in the past few decades and selections tend to only be available as small grafts and patience is needed to raise them to maturity. It can be worth it, though, if you want fruits with improved flavor, fewer seeds and reliable ripening times. 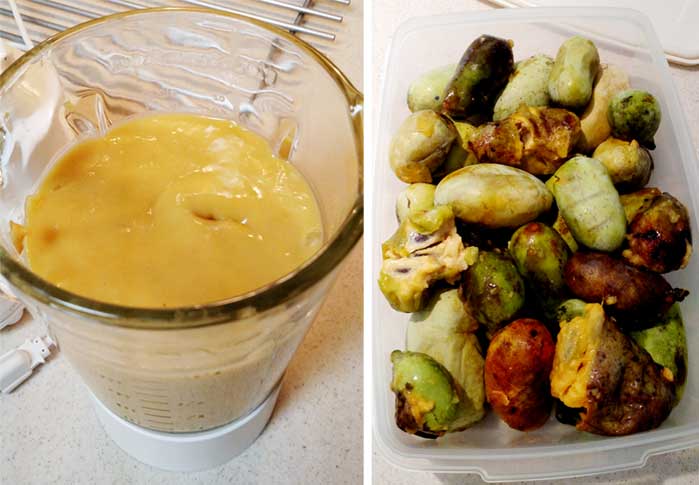 Last year and this year I harvested enough fruit to make several recipes. Preparing the fruit can be time-consuming, as you need to scoop out the pulp and remove the large seeds. I must have collected several pounds of fruit (maybe 30 pieces?) which yielded a little over 4 cups of pulp purée. Recipes can be found online from places like Kentucky State University, Perdue and others. I made three: a cake, a loaf and “squares” which are something akin to brownies or pudding, depending on how you look at it. They’re tasty, and don’t taste nearly as strongly as the raw fruit, which can be off-putting to some because of its texture and flavor. I don’t like banana, which the flavor is most similar to, but when cooked into recipes it mellows and is quite interesting as a background flavor that you can’t quite put your finger on what it reminds you of. I find it fascinating that raw pawpaw is yellow and cooked (baked) pawpaw takes on a rosy color. Since fruits have such a short shelf life, it’s best to use them right away or at least process them into pulp and freeze it for later use. Be aware that pawpaw pulp will oxidize like a cut apple and take on a caramel-brown color where exposed to air, so put it in an air-tight container to minimize browning. As far as I know, though, the browning won’t change the flavor. If you get your hands on raw fruit, handle them gently because ripe fruits are quite soft and easily break open or get squished (as you can see in my picture). I bring in the finished goods to work so everyone can try some; they’ve been a big hit both times, so I’ll probably make another batch if I can find more ripe fruit. If you get the chance, and especially if you’re a fan of native foods, I would encourage you to try growing and eating pawpaw. It’s a pretty tree that’s good for wildlife and humans alike and is always fun to stump your gardening friends with! 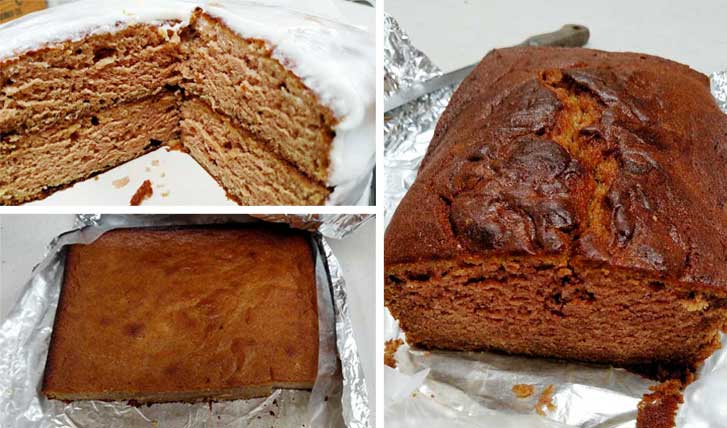