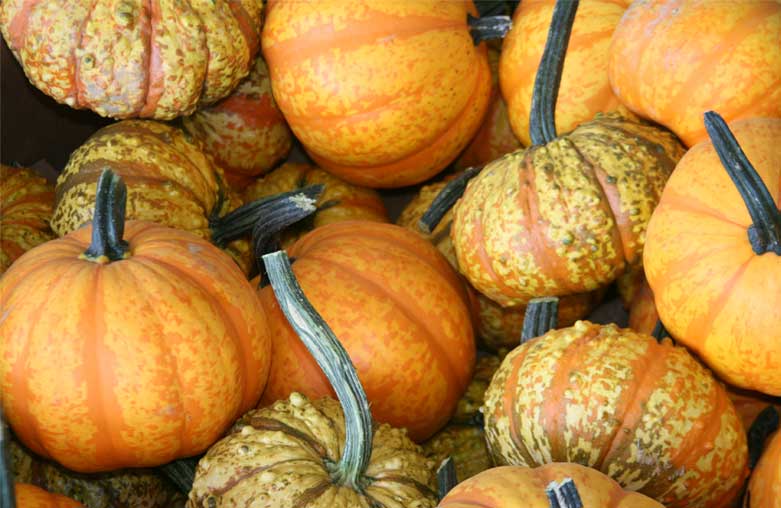 There’s something about the Fall season that really gets us excited: it’s Pumpkin Time!  Alfred Millard, our President and CPB (Chief Pumpkin Buyer) and some lucky employee meet at 6AM, grab some coffee, and head off in the Behnke pickup truck to Leola, PA.  The goal: the wholesale produce auction to buy pumpkins, squash and gourds for the garden center.  Steve Carter, our driver and handyman, arrives a couple of hours later with a real truck, and together they all return with tons of fresh pumpkins and squash from the local farmers.  Sometimes even some apples and corn shocks.

Many of the growers are Amish, and it’s fun for we city boys to see them arrive with horse-drawn wagons of produce. One of the auction staff drives his [not horse-drawn] forklift barefoot; he must have feet as tough as a Hobbit’s.  The auction area covers several football fields and moves quickly. Alfred does the bidding. When I’m there, I’m still stuck on “uhhhh…” and they’ve already moved on to the next lot.  [For more on the auction, see “Pumpkin Time” on the Behnke Blog.]

Personally, I like the winter squash we bring back.  They are very ornamental, and make great Fall decorations piled around the front entrance of our home.  Afterward, they are great for cooking: what a deal, you really can play with your food.  The nice thing about winter squash is they keep for a long time without refrigeration, as long as they aren’t cut open.  You can keep them in a cool spot for months. [My cool spot was on the corner counter between the built in stove and an outside wall.] 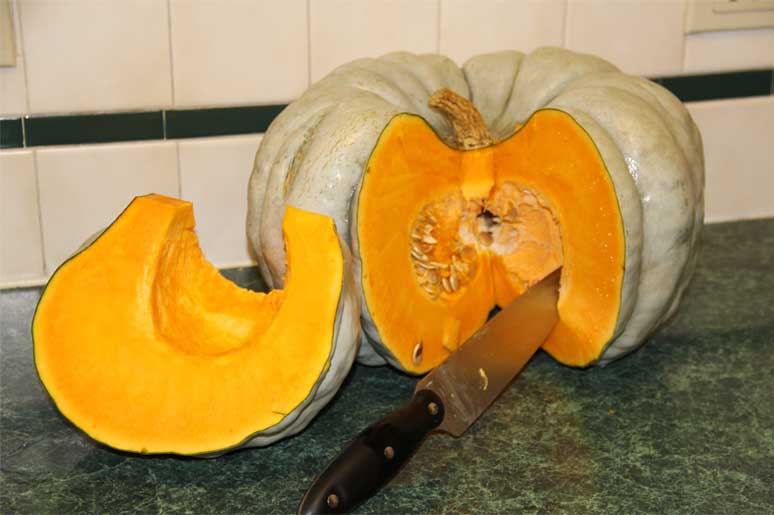 Preparing a jarrahdale pumpkin for cooking

These squash have very thick walls, not a lot of moisture, and a small hollow with a few seeds.  If the squash weighs 10 pounds, almost all of it is edible.  In fact, they are so thick, they are difficult to cut.  I use a large, sharp butcher knife and a whole lot of care, starting with cutting on a non-slip surface. I was skimming the internet and someone suggested helping the knife go through the squash by tapping it with a rubber mallet.  If you are gentle, that would probably work without breaking the knife or removing half of your fingers.

With just the two of us [my wife and I, not the Squash and I], ten pounds of squash go a long way in our house.  Especially with me wanting to try five or six different types over the fall and winter.  There are many recipes available, but I just kept it simple and baked them. I either cut a section out of the squash and put the rest in the refrigerator, or cut it into sections and baked them all, freezing the extra in freezer bags.  Thawed out, I used them for soup or a thicker porridge, usually with some cream, butter, brown sugar and sherry.  To quicken the baking time, I found I could microwave them to heat them up before putting them in the oven.  The varieties don’t change much year to year [well, they are heirloom varieties, after all] so I expect I’ll be baking some of the same ones this year.  Note to wife: “Get ready honey, the soup’s on the way!!” 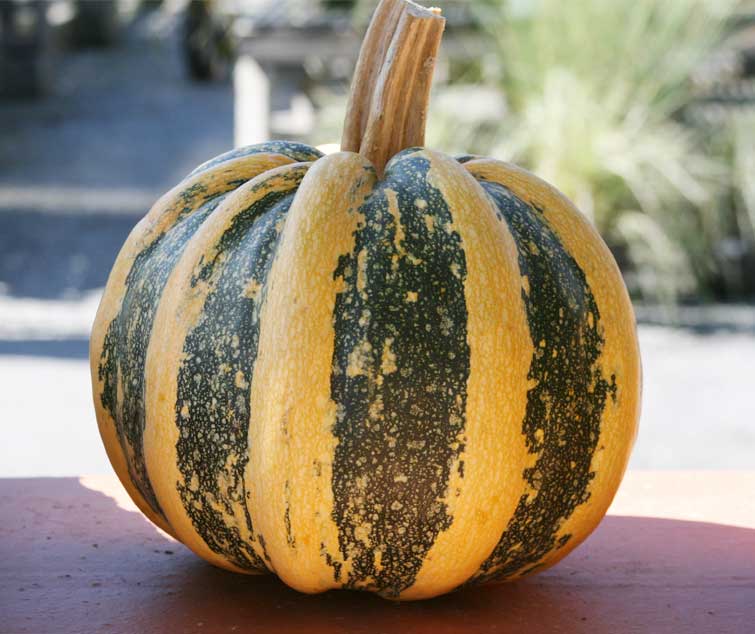 The five heirloom varieties I tried were Cinderella, (aka Rouge Vif D’Etamps), Jarrahdale, Fairytale (aka Musque de Provence), Galeaux d’ Eysines, and Tondo.  All were fine.  The Tondo is the smallest and probably easiest to handle, but I think the Jarrahdale was the most flavorful.  I have to admit that my taste buds are not as operational as they used to be, so I am happiest with a more intense taste.  My recollection of the Galeaux d’ Eysines was that it had a pinker flesh and a more mild flavor than the others.