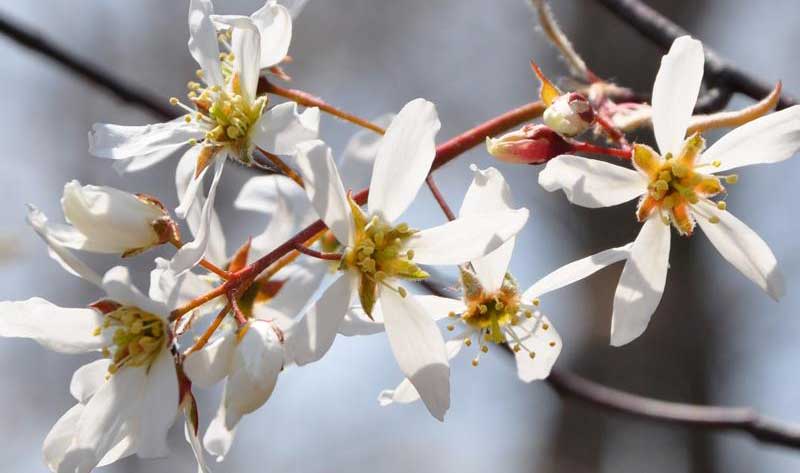 So Many Plants, So Little Room
Finding beauty, low-maintenance and versatility in a plant is sometimes difficult.  Many plants that are coveted for being the most beautiful, are high maintenance and finicky, like the stereotypical grand opera diva always wanting something, but never quite pleased about anything.  Versatile and low-maintenance plants can also pose a problem, either being too aggressive, invasive, weedy-looking, or just plain boring.

But if you look further, particularly at many of our own native plants, you now have a different problem, deciding which plant to try.  So many great native plants, but not enough room in the garden for all of them.  Serviceberry is one of those great native plants that are worth finding room for in the garden. Serviceberry, Amelanchier canadensis, is beauty, low-care and versatility wrapped in a package that additionally includes multi-seasonal interest, wildlife benefit, and tasty edible fruit.  So, why is this plant not on everyone’s wish list?

Unfortunately, it is just one of those things, where foreign plants were considered the most worthy, and our own native plants were placed by the wayside in mainstream gardening.  But this is changing rapidly and native plants are quickly becoming the coveted plants, raised up on a pedestal even higher than the previously touted beauty queens from foreign countries.

Serviceberries are considered to be small trees or larger shrubs and are one of my favorite plants in the garden.  Their versatility is incredible.  They are undemanding as to soil type, preferring average soil and average moisture.  They can flourish in sunny to partly shady conditions.  They are also smaller in stature, most growing to less than 25 feet tall.  And because of their wispy branching, serviceberries can be easily and successfully tucked into mixed flower borders or between or under larger trees.

Meaningful Blooms
In early spring, usually in April, serviceberries are covered in tiny white to light pink flowers, resembling tiny single-petaled roses (that is why they are in the rose family).  A serviceberry in bloom is like a beacon in the forest edge or in the partly shaded garden.  Each flower petal seems to capture the light of the sun and glisten.  If I were a child, I would imagine stories of tiny garden fairies hiding among serviceberry branches, where the petals of each flower are the tiny fairies’ tutus sprayed with glitter and fluttering in the slightest breeze.

Serviceberries bloom a bit earlier than redbuds and dogwoods, so they are a good flowering tree to add for a spring succession of bloom.  Use native azaleas, Allegheny pachysandra, and Virginia bluebells planted with serviceberry for the shady border.  For a more sunny area, plant serviceberries with beardtongue, Penstemon digitalis ‘Huskers Red’.  Although the beardtongue will not be in bloom yet, its red foliage will highlight the light pinks of the flowers of the serviceberry.  Add a backdrop of arborvitae in the background to backlight the dainty and open structure of the serviceberry in your sunny border planting, and you have a striking combination that works for the entire growing season.

Historically, a blooming serviceberry was an indication of important timing, and that is how many of the common names used for this plant came about.  One such common name is shadblow, called as such because serviceberries bloom when shad fish have come to spawn.  The name serviceberry came about from the colonists.  After a long winter, serviceberry was in bloom when the ground had thawed enough and it was a perfect time to bury the dead.  So serviceberry meant funeral service.  It is also sometimes called juneberry, simply because some of the species produce their berries in the month of June.

Being a native plant, serviceberry blooms are meaningful to our local wildlife as well.  Early pollinators, looking for a hard-to-find meal, rely on serviceberry blooms.  In return, their pollination helps the plant produce delicious berries later in the season.  Birds returning from spring migration and working hard to establish territories and build nests depend on these pollinators as an early, highly nutritious, and much-needed food source.

The Fruit of the Matter
Later in the season, serviceberries produce delicious fruits resembling small blueberries.  At first, the fruit is red and very tart, but wait for it to turn darker and deepen to an almost purple hue, and you will be surprised at how deliciously sweet these berries are.  Yes, they are edible for people, and can be used in recipes just like you would use a blueberry.  The tiny seed in the center of each berry is also edible and lends a little bit of a crunch to the berry.

Birds also like the berries.  In fact, more than 30 species of birds rely on this early berry food source as they begin to prepare for their migration south, or for their stay here during the cold winter.  Birds such as catbirds, grosbeaks, cardinals, vireos, and cedar waxwings actually prefer serviceberry fruit to other food sources in early summer. 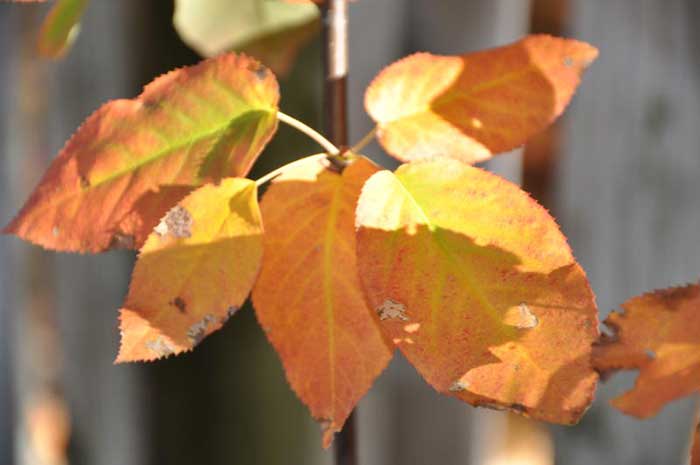 In recent years, serviceberry has become more popular and many new varieties are now becoming available in the nursery industry.  However, one of the most popular varieties is Autumn Brilliance, Amelanchier x grandiflora ‘Autumn Brilliance’.  This beautiful variety boasts light pink to white flowers, which later turn into delicious fruits.  Its smooth gray bark is appealing in all seasons, but really shines in the winter landscape.  And its namesake ‘Autumn Brilliance’ means that this plant is not one to act like a wallflower during the fall foliage carnival.  Its leaves can turn brilliant reds, oranges and yellows, sometimes all of those colors combine on one plant, creating an autumn scene more dazzling than a painter’s palette filled with the hues of autumn.  And growing to about 20 feet tall, means that this small tree can fit into any landscape.  Or more than one can fit into the landscape.  I have six in my garden.

So many native plants, so little room in the garden.