Though no gardener ever thinks her garden is ready for viewing, under pressure from various sources I’m offering these mid-June shots of my brand-new back yard in Old Greenbelt.

First, a “before” shot of the back yard, which which you first saw here.

Above you see the result of lots of construction – the porch, plus a flagstone patio and path.  Plus some painting – of the privacy screen, to match the Adirondack chairs.  On the left are Abelias, Nandinas, and assorted hostas, among other perennials not visible in this shot. 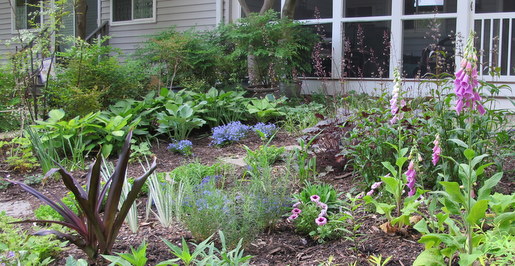 A closer view reveals some of my favorite new perennials: the purplish Eucomis, Amsonia to its right, and variegated Iris pallida in between.  In bloom on the far right are Foxgloves, a gift from a neighbor.   Of course with new perennials that haven’t filled out yet I’ve added some annuals – like the petunias and heliotrope seen here.  Upon the advice of a landscape architect friend, I’m trying to limit the color palette in this tiny garden – to purples, blues and pinks.  Not allowed:  red, gold, or yellow.  At least that’s the plan. 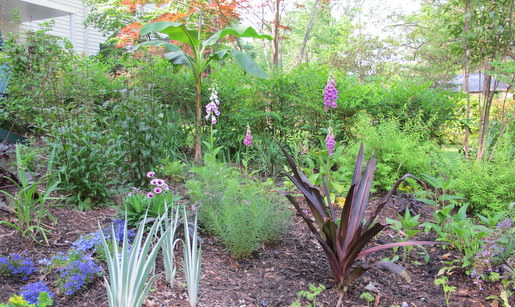 Another view of the same area includes one of the hardy bananas I’m growing for the first time and for which I have great hopes!  I’m watering and feeding regularly and expect great heights from these exotic accents. 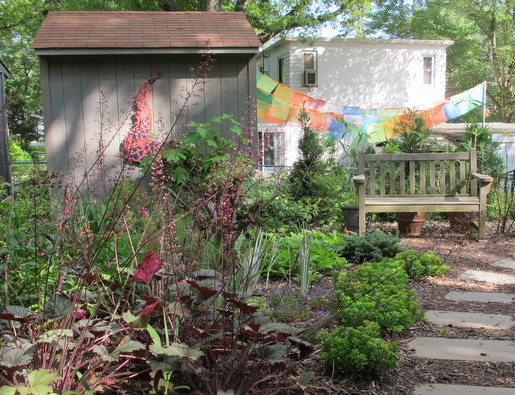 Privacy and screening have been big concerns, especially with the sidewalk that runs across the end of this back garden, and you may remember my bragging about the supposedly ingenious scheme for instant screening without busting the budget.  Well, those stalks of cut bamboo were better than nothing over the winter long but eventually they lost all their leaves and had to be replaced.  The old stalks had to be cut and packaged to be sent to the landfill with regular garbage because unlike other yard waste, bamboo will not decompose, ever.  What a pain!  And the new stalks I installed lost their leaves about a week later in a thunderstorm – so I gave up on the whole bamboo solution.

My new solution?  Buying two more Cryptomerias to add to the original three, which you see in the photo above behind the bench – they’re fast growers.  It’ll still take at least this season and possibly next for them to hide my neighbor’s storage area, so I also strategically hung some Tibetan prayer flags across the space.  They’ll fade to nicer colors (I’m told) but hey, they fit well with the other Asian touches in the garden and I really like their spirit. 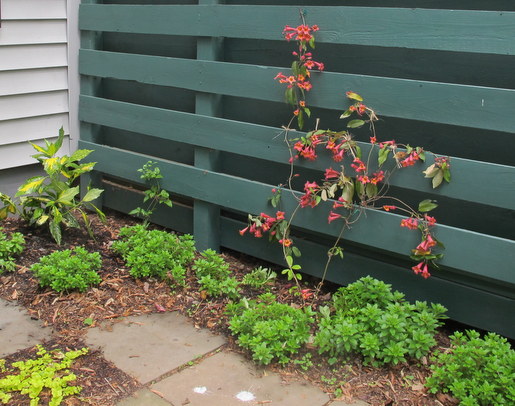 Here’s a close-up of the little patio and privacy screen.  From left are Acuba ‘Picturata’, a groundcover Sedum and Creeping Jenny, and the fabulous Crossvine (Bignonia) in bloom.

Now for the front garden, which I first blogged about here.   First, the “before” shots.

Here’s a view from the second floor window taken a few weeks ago before the perennials had started blooming (my excuse!).  Since I first showed you this garden, the biggest change is the row of Arborvitae ‘Emerald Green’ I planted in order to eventually block my view of the raised parking lot beyond (cropped off here).  I planted them closer together on the right, to provide the best screening into my living room, and also avoiding planting them a straight line.  That way, their lack of perfect uniformity will be deliberate, not a gardening mistake. 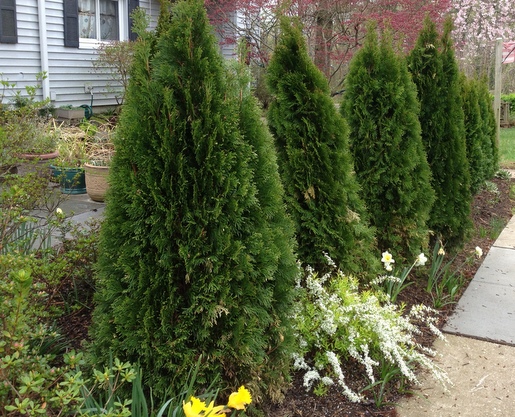 This close-up of the Arborvitae hedge reveals its lack of straight-line perfection, which also provided space for an ‘Ogon’ Spirea, bulbs and perennials between the hedge and the sidewalk.  I don’t like tall, solid green walls, and doubt that my neighbors do, either, so this is my attempt to diminish that effect. 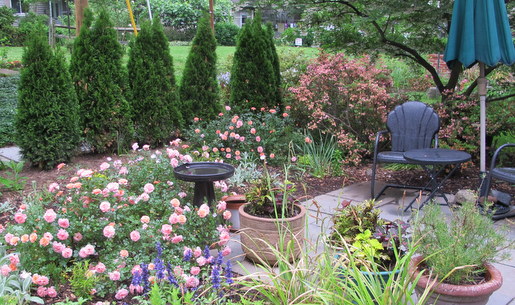 From the other side, this shot shows the Drift roses in bloom, plus annual salvias and potted-up coleus.

That’s all for now, until September, when this garden will be primped to its utmost in preparation for its debut on the Greenbelt garden tour I’m helping to organize.  I’ll publicize it here and on the Behnkes Facebook page.

Photos and text by Susan Harris.