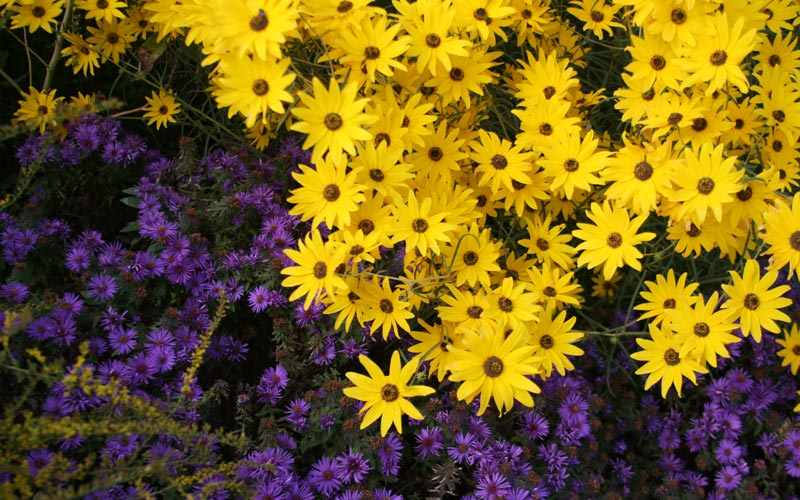 With this and that I was gone for much of September, and when the weather cooled down for a few days last week (those couple of cool, sunny glorious days in early October), it seemed like it was time to take stock of the two perennial gardens that I oversee here at Behnke’s—the rain garden and the pollinator garden.  The summer blooming plants were pretty much done blooming, but there was still some color, always appreciated this time of year.  All of the plants mentioned below are best in full sun.

First, I had to do some cutting-back.  Even though the gardens are planted with nature in mind, they are still gardens and require periodic maintenance to be presentable. Many a meadow garden or native plant garden or rain garden becomes a weed patch, or overgrown.  At this time of the year, there is the transition from warm season to cool season weeds, signaled by the appearance of henbit and/or purple deadnettle.  We want to remove whatever summer weeds are left, especially if they have seeds, and knock back the new weeds.  We are only hand-weeding in these gardens, so we will have to weed again a couple of more times this fall.

Remembering that these ornamentals themselves can produce prodigious amounts of seed, I cut back the ironweed (7 feet tall), Joe Pye weed (5 feet tall), and wild bergamot (Monarda fistulosa) (4 feet tall) to the ground.  The giant hyssop, Agastache ‘Blue Fortune’ was nearly done blooming.  I took out the five foot tall shoots, leaving young, one foot tall shoots in place as they were blooming away with light blue flowers, and the bumblebees soon found them. 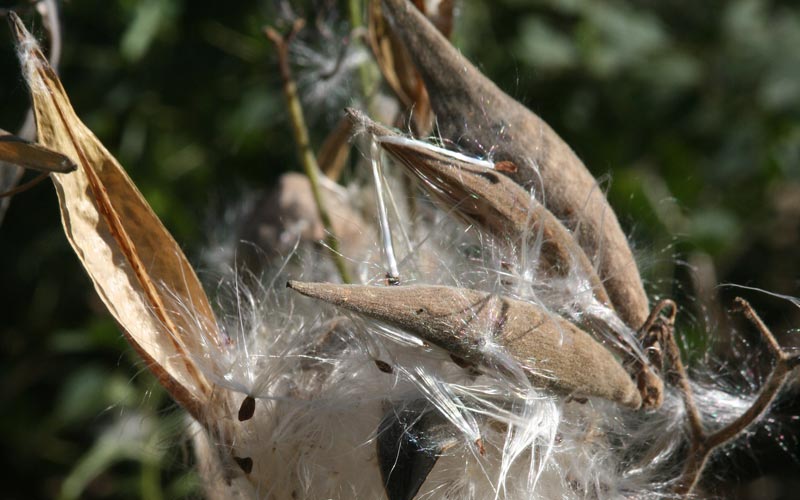 I left the seed heads on the orange butterfly milkweed (Asclepias tuberosa; 1.5 feet tall), hopeful that the little wind-borne seeds on their gossamer parachutes will spread around the neighborhood.  When I was a kid, these bits of flying fluff were called “fairy wishes” and if you caught one before it touched the ground, you would get your wish.

Removing the shoots of all these tall plants allowed the plants that were in bloom to become more visible.  The most impressive was perennial sunflower, Helianthus salicifolius ‘First Light’, a golden daisy on five to six foot stems. They are in full bloom this time of year.  For people with shorter-plant needs, there is another cultivar of Helianthus called ‘Low Down’ that grows to only a couple of feet.  These late blooming perennials are a real boon to butterflies, as the available nectar sources diminish with the cooler weather that we normally have in October. 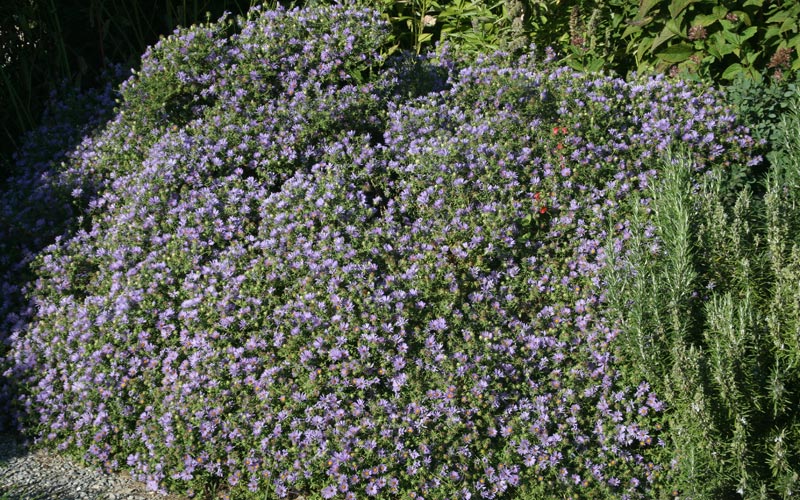 Our ‘Fireworks’ goldenrod at peak bloom (Solidago rugosa ‘Fireworks’) served as a nice backdrop for aster ‘Purple Dome’, as it is several feet taller and the golden flowers complement the purple of the aster.  We’ll have to pull a lot of this out next spring as it apparently has taken plant assertiveness training and spreads underground pretty much wherever it chooses to go.  That said, it’s not tooooo aggressive (for a goldenrod), and it’s still the prettiest goldenrod around, with its cascading flowers.

There are a number of salvias from the southwest US that offer long blooming seasons and vibrant colors in reds, pinks and purples.  We consider them to be a little iffy here, because of their need for good drainage and marginal winter hardiness.  They are actually little shrubs but they fit better into our perennial sales program than our woody plant program.  I put Salvia hybrid ‘Heatwave Blaze’ into the garden three years ago, and it has proven to be quite vigorous in this well-drained bed.  It’s very twiggy and benefits from a hard pruning in spring.  Its red blooms in summer and fall are attractive to bumblebees and I suspect that hummingbirds would like it as well. 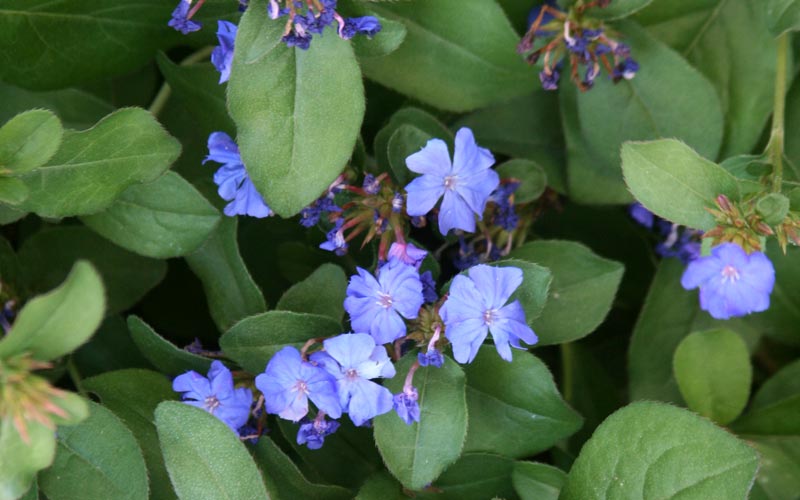 Worthy of mention from other gardens: the blue leadwort (aka plumbago, Ceratostigma plumbaginoides) that we wrote about in August is still looking great in mid-October.  In my shady garden at home, toadlily (Tricyrtis) is blooming, at least the ones the rabbits have left alone.   Nodding ladies tresses orchid, Spiranthes cernuua, a native terrestrial orchid with small white blooms, has seeded around and I now have around 50 of these in bloom.  This is a total shock, given my level of maintenance in the garden, which is not what it used to be. 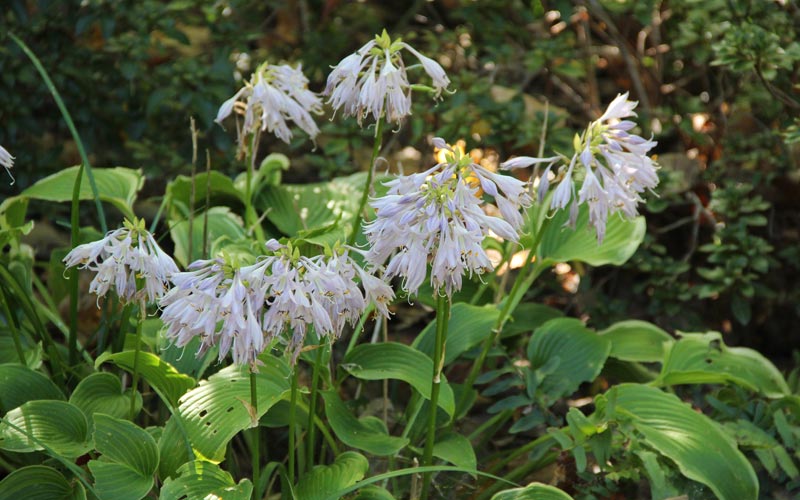 Last, the much maligned hosta flower.  Okay, so most hosta blooms are sort of “meh.” But as you get into late summer, you are rewarded with white, fragrant blooms from hostas like the old standard, ‘Royal Standard.’ (Preferred by deer with discriminating taste everywhere.)  In late September and into October, there are hostas that actually bloom quite heavily and are attractive in bloom.  One I got many years ago is called Hosta kikutii ‘Kifukurin Hyuga.’  I mention this as an example of the sort of blooming you might expect on some of the late blooming varieties we carry in high hosta season (May, June) when we can get them.  Worth looking for.

Not only good for the late-flying butterflies, these late blooming perennials are a way for you to hold onto summer and fall just a bit longer.