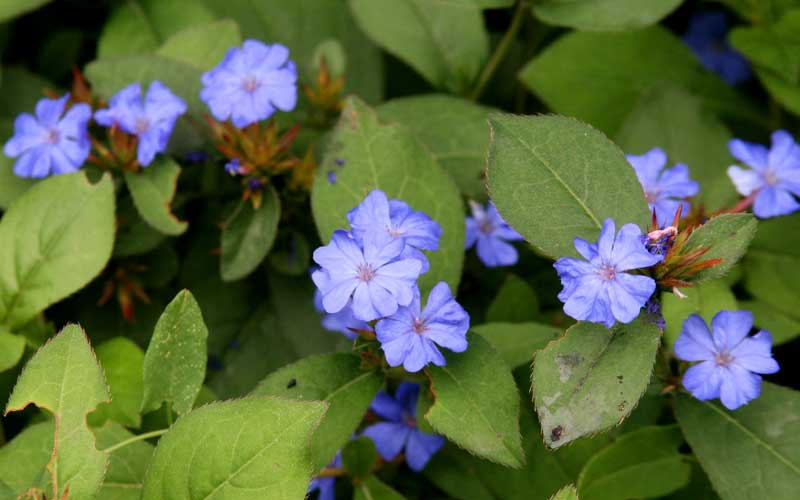 One of our favorite perennials is plumbago (sometimes called leadwort), technically known as, Ceratostigma plumbaginioides.  We like it for its deep blue flowers and its long bloom season.  Although we think of it as a late summer/early fall bloomer, we have a patch planted in a south-facing raised bed against a building here at Behnke’s; it was planted there perhaps twenty years ago.  This year it was in bloom in June and has remarkably been flowering ever since.

Perennial plumbago is a ground cover, reaching a foot tall and spreading by rhizomes (underground stems).  In the fall, foliage growing in the sun develops a deep red color before dropping.  Plants go dormant in late fall, dying back to the ground, and hiding until spring where it can be late to emerge, along with other slowpokes, like butterfly weed and perennial hibiscus.  Depending on soil temperature, you may not see new shoots until late April.  On the other hand, the plants in our warm, sunny, raised bed were already showing new growth in March this year.

Plumbago can be grown in a wide range of light conditions, from full sun to shade, but you will find it happiest with morning sun and some afternoon shade in the hottest part of the day.  Too much sun will burn the foliage in the summer, and too much shade will reduce the amount of blooming, so a little of both is ideal.  Bumblebees love the flowers, and the plants have very few insect pests or plant disease issues. 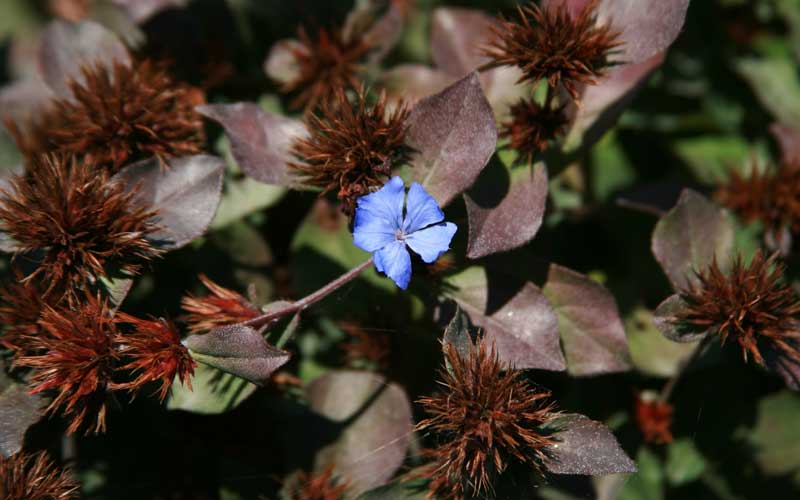 If plants get a little straggly by mid-summer, you can trim them with a lawn mower set on its highest setting, rake off the cut pieces, and new foliage will grow in more densely, and it will quickly form new flower buds for a second stretch of blooming into the fall.  They tolerate dry soil, but they don’t like it.  Water consistently during any long dry periods for the most attractive plants, but otherwise they really don’t require much else.

Plumbago can also be used as a cascading plant over the edge of a garden wall or timbers.  We like to let it do its own thing and find that it’s most beautiful when it’s allowed to weave around, popping out from between the cracks in a stone wall, or draping itself over the margins of the garden.