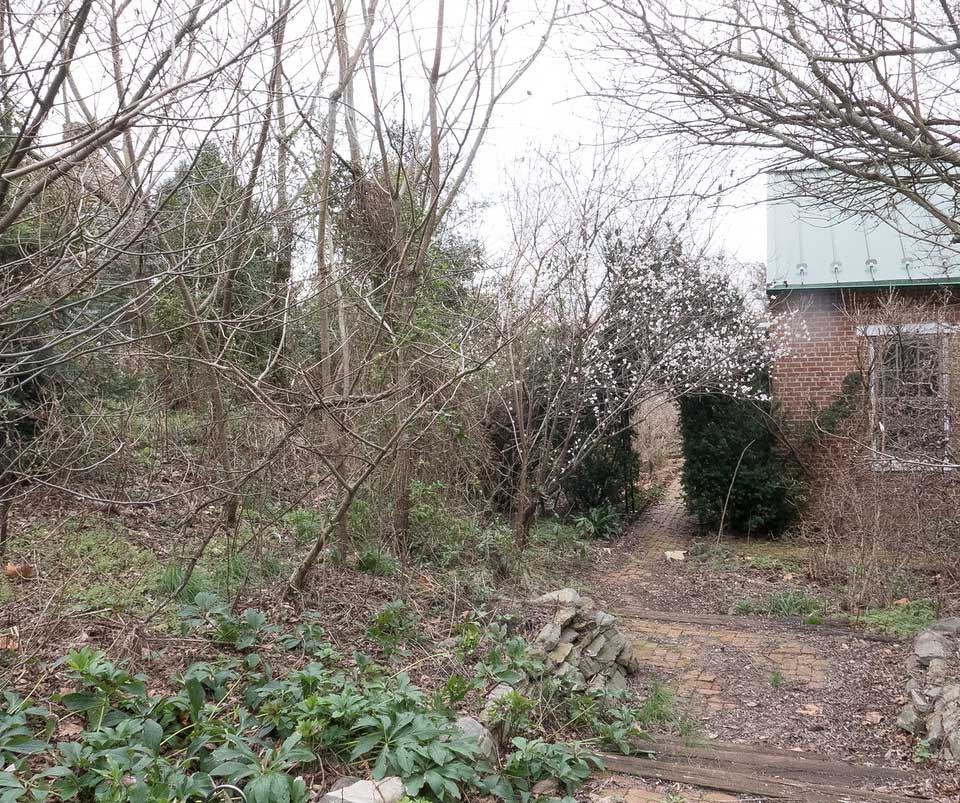 My garden gives a great winter show, starting in November.   To start with, I have strategically placed evergreens, pines, yew (a small but tasteful hedge framing a garden “doorway”), deodar cedars, Southern Magnolias, Norway spruce, and hollies.  Ho for the holly—it comes in so many different kinds.   Small leaves and large, prickly and non, deep green, olive green, variegated in yellow or white, red or yellow berries;  the Japanese holly is no good for berries (they are black) but is a good substitute for box bush and looks essentially like it.  (I do also have some box, although at the rate that box grows, they won’t be specimens until I’m long gone.   That’s all right.)    Eventually I hope to replace my windbreak planting of Leyland cypresses with holly and other evergreens, although since said windbreak is on a highway cut I plan to plant only males.  Otherwise, I can just see people traipsing up the bank with shears for some free Christmas greens…  The males can do the duty for females planted internal of my borders.   Some of my hollies are really coming into their own.  I have two ten foot tall Burfords, one with red berries and one with yellow, flanking the door of my potting shed.  Bought as on-their-last-legs “pity puppies” last autumn (not from Behnke Nurseries), they have leafed out nicely this year andare berrying.  Next spring they should take off like big birds.  Many hollies are self fruitful—Nellie Stevens comes to mind—but BE SURE AND ASK before you buy, whether you need a pollinator.   There are also the winterberry type deciduous bush hollies, in red, orange and almost-yellow.   Well worth it.  Incidentally, if you see hollies of the type you want to buy already in fruit on your block, you know there has to be a good pollinator somewhere near. 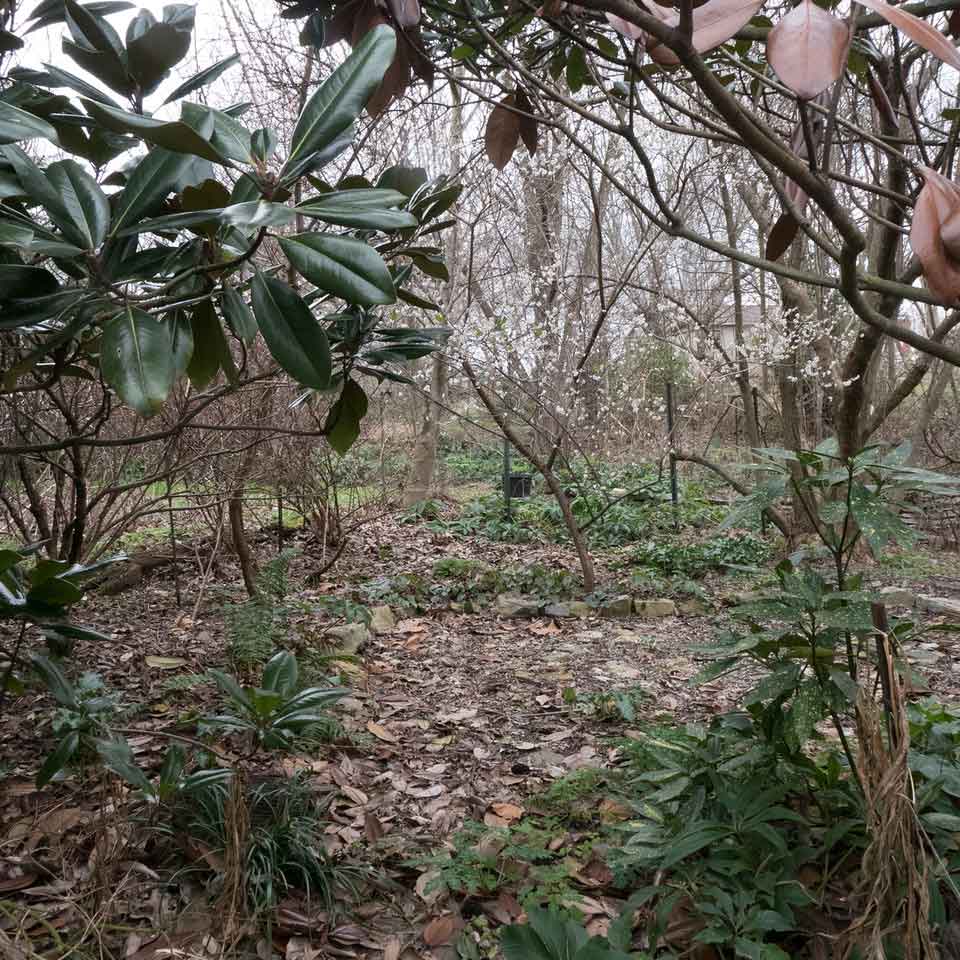 Southern magnolias are an all season plant; nothing ties a landscape picture together like their dark green leaves.  I have the space for large ones, and I favor  ‘Edith Bogue’ as the hardiest and a good doer, but there are many types out there, including dwarfs like ‘Little Gem’ that top out at about fifteen feet and can be put in a small space.

So long as you are thinking about evergreens, consider getting by mail order a (small) grand fir, Abies grandis, which I can’t remember seeing sold locally.  This becomes a huge tree, but that is not likely in one’s lifetime; it can be pruned –and the foliage smells of tangerines.  Similarly, Port Orford cedar and Abies concolor, usually sold as cut Christmas greens, also strong, sweet, distinctive fragrances.   Easily available here, but little planted compared to what they should be, are deodar cedars.   I like the feathery look of the branches.  They come in the plain green, bluish forms, and I believe there is a goldenish form, although I’m not enamored of gold evergreens in general.

With leaves gone, the shape of branches comes to the fore.   A Japanese maple in the summer is a totally different animal from the spidery line-drawings of branches that emerge when the leaves are gone.  Especially in the weeping types.    The old contorted filbert, Harry Lauder’s Walking Stick (google Sir Harry Lauder) is a marvelous attention-getter in the winter.  Later in the winter, it’s also hung with drooping catkins.  (You won’t buy it if you only see it in the summer.  The same genetic glitch that contorts the branches also contorts the leaves and your friends will make snarky comments.  But in the winter, it comes into its own. )

Exfoliating (hortspeak for “peeling”) bark is also a treasure.   Paperbark maple, Acer griseum, peels in great strips of pink-orange, and Bungei pine (Pinus bungeana) flakes off in tan, white, grey, and several kinds of green, like a sycamore.  Here, of course, you want the smallest tree you can buy.  The larger trees tend to be sheared like a Christmas tree to make them bushy, and that is the LAST thing you want—too many branches will hide the bark.   Look for the flaking to start in about four years—depending on the size of what you get.

For small spaces there are small shrubs—dwarf nandinas that top out at two feet or so, the dwarf Sarcococca with its small ,deep green canoe-shaped leaves, and insignificant flowers that you can nevertheless smell half a block downwind.  This tops out at about fifteen inches, for me.   The larger nandinas give you beautiful feathery foliage and bright, bright clusters of (usually red) berries that can last into April. 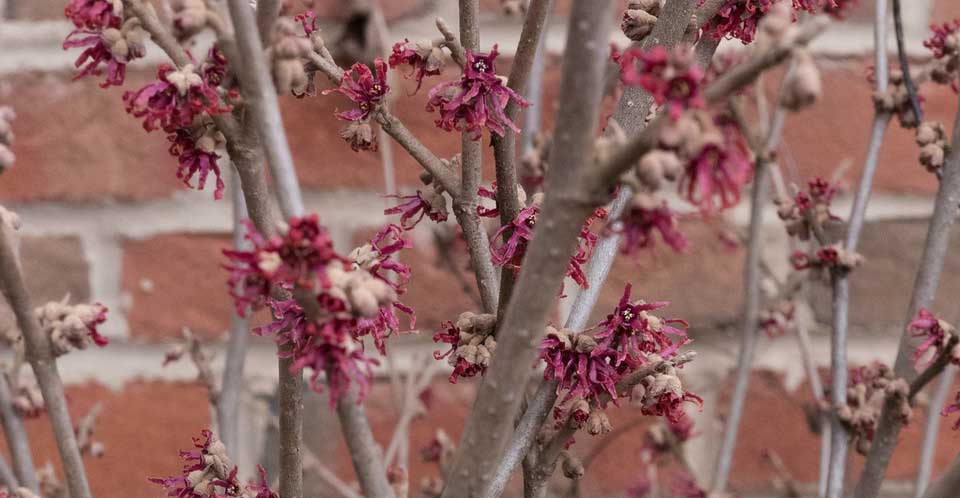 If you have the space, there are several large flowering shrub options.  You will rarely see these at your neighborhood garden center, because when they bloom the customers aren’t there, and when the customers are there, they look like green blah…….The early witch hazels (Hamamelis vernalis and its cultivars) start bloom at the New Year, and smell sweet for the most part;  I suggest not cutting witch hazel, though, because- to my nose- the smell goes a bit odd when you do.  I have gotten the cultivar H. vernalis ‘Quasimodo’ this year.  It’s supposed to be a 3’ dwarf.  I’ll let you know….eternal optimist that I am, I’ve planted it in front of a window.   Also, there’s Chimonanthus praecox, the Wintersweet.  It blooms in January for me and you can smell it twenty feet downwind.   The Autumn cherry (Prunus x subhirtella  autumnalis), actually a small tree,  blooms sparsely in a good late autumn and continues with the odd pink cherry flower through the winter.  Prunus mume, the Japanese flowering plum, can start in a warm January, in white and various pinks, single and double flowers.

Elaeagnus pungens starts blooming in October for me and usually is fragrant through December.  The flowers on this one look like little parchment-colored whole cloves that open up to tiny, four-petaled flowers, and the bush has the advantage of being evergreen.  People regard the whole Elaeagnus tribe as potentially invasive, but in twenty-four years I have seen no root suckers from my four bushes, and only one seedling. (Discovered this fall, carefully dug and potted for planting in the spring.)   Warning: You should keep this trimmed, to look good.  It sends out long, waving leaders which look like tentacles and must be cut back or the bush looks like something out of a Grade B horror movie.   But the smell, oh, the smell….. The winter honeysuckles are also good for late winter, especially in a protected spot, with white flowers and a strong, sweet smell.  These tend to get large but once they have flowered you can cut the living daylights out of them.  I’m attempting to limb one up to about four feet above its bed, to free space underneath;  you could just as easily keep it cut down low. 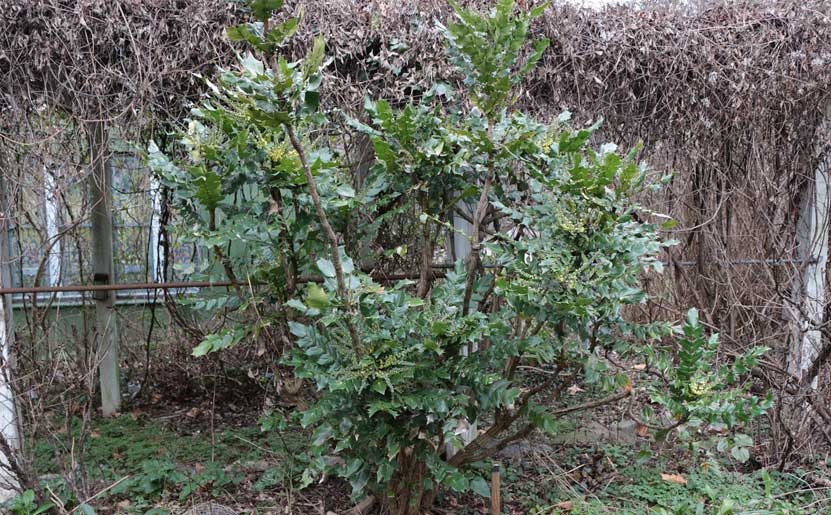 Mahonia, the Grape-holly, is a bit of an odd bird, with its pinnate, leathery, dark green whorls of leaves.  The old fashioned types tend to be spring bloomers; the intermedia hybrids are coming into bloom now.  I have what I think is the cultivar ‘Charity’ and I got another that was mislabeled ‘Mahonia virginiana’ at a feed store near Chapel Hill, NC—there is no such animal, but I bought it just to see what it would turn out to be.  There are no bad mahonias.  For those with a tendency towards prickly leaves, there are several Maho-berberis hybrids out there, with leaves spinier than a holly, rather hollyish, and of a good dark green that can bronze in a bad winter. 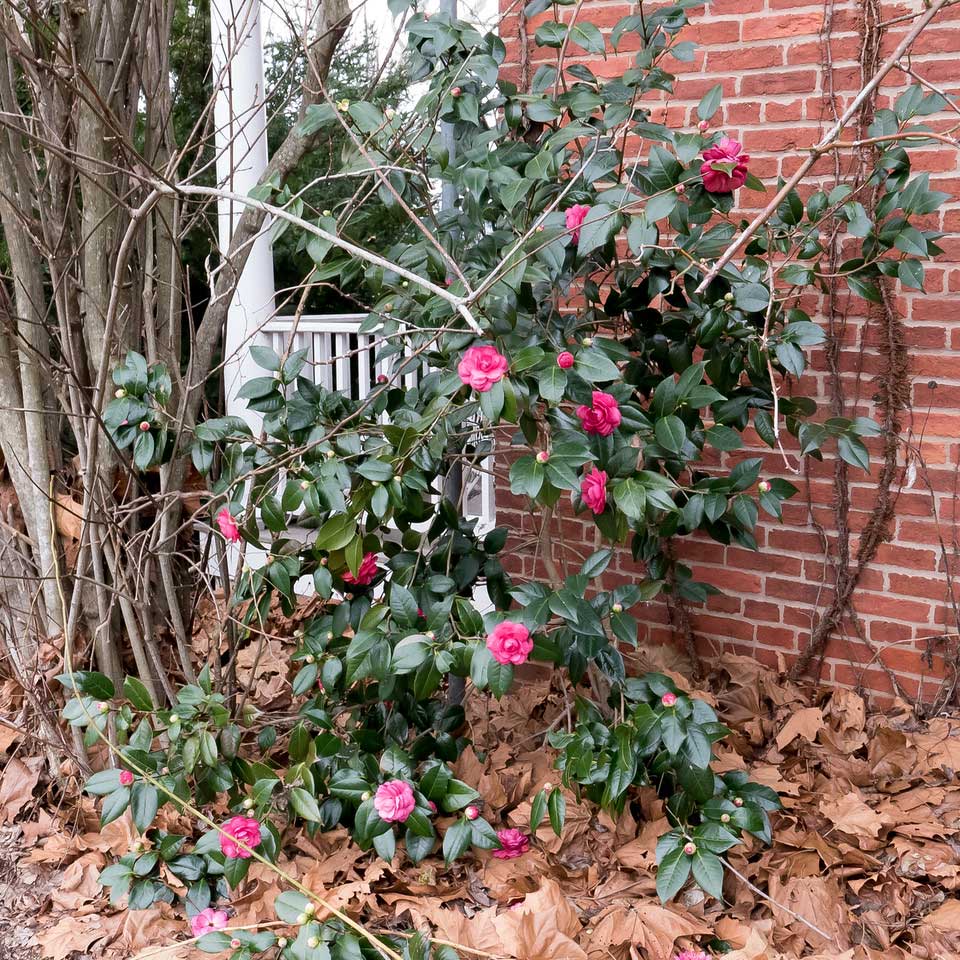 Camellias deserve an article to themselves.   Suffice it that I have them and treasure them through the fall, winter and spring.  These past winters were hard on some but the old war horses, Berenice  Boddy and Lady Clare never turned a leaf; nor did the Ackerman autumn blooming series (Look for “winter”themed names) nor the ‘April’ series of spring bloomers from the efforts of Dr. Parks in NC.  For the deep winter, camellias are extremely valuable to me for their evergreen leaves- the flowers are a bonus.

This is just touching the surface.  Come in to Behnke’s and ask for things with winter interest.  They have, historically, stocked some of the plants I’ve mentioned.   But the way to get them to stock the rest of these is to scream for ‘em.   They do listen. * [See Editor’s Note, Below.]

*Editor’s Note: Gardeners approach their gardens with different interests; Jim is a “gardener’s gardener” and has the keenest of eyes for both the steady performers and the esoteric. Jim’s articles are always met with a mix of great anticipation and a general gnashing of teeth, as our buyers (esoteric plant appreciators one and all) mutter “why doesn’t he recommend things that we can actually source?”

In spring we have a quite extensive supply of dwarf and unusual evergreens, as well as Nandina, Southern Magnolias, Hamamelis, and other things that Jim has mentioned.  If we don’t have a wholesale source for something he suggests, we’ll do our best to recommend a specialty mail order grower if you email us at behnkes@behnkes.com).  There are some items that we shy away from offering due to potential invasiveness, so we have discontinued sales of the non-native Lonicera and Elaeagnus, and we note that Mahonia tends to seed out so you should be careful where you plant it, should some errant bird spread it to the forest.