I don’t know how long ago the tradition started and I’m really not sure how many other friends and family receive (or received) an amaryllis bulb from my parents but some time, years ago, they began a holiday tradition and sent a bulb, of their choosing, as a holiday gift. When a square box arrived with the words “Open Immediately ~ Live Plant” arrived, we felt that marked the official start of our holiday season. Whether sent or purchased from a local, reputable nursery like Behnke’s, giving an amaryllis as a gift can start a tradition and or bring nature’s beauty into a home. I know it’s my holiday season.

How many other recipients looked (or look) forward to a bulb’s arrival and do/did they enjoy the growing process as much as the stunning results? To be honest, for the first few years, I enjoyed the challenge but I doubt I was really invested in the process of forcing any bulb much less an amaryllis. I hope, like others (no matter how an amaryllis enters their life) the joy, and anticipation, has become an integral and loved tradition linked with a gardener’s “winter months.”

It might not be a time of year when we look outside the window in search of color, growth, emerging greens and climbing vines but that only makes this gardener relish the amaryllis more. It’s a joyful, appreciated sight and I don’t take this beauty for granted.

A forced bulb is different than, for example, multiplying cone flowers (though they, too, are stunning). When a forced bulb’s colorful blossoms burst out of the tear-dropped shaped bud, it’s a breath taking sight culminating from a long growing period (the length of time depends on conditions and type of bulb). It’s like a magician waving a wand, grandly stating . . . “TA-DA!” 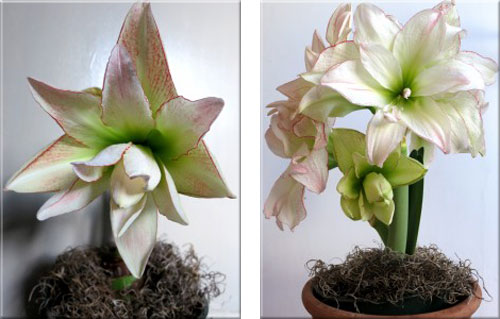 A singular or cluster of blossoms can be appreciated from all angles and they last (sometimes they need staking for support). Whenever I’ve had a particularly long stem showing signs of breaking, I cut them and put them in a vase – it’s just as lovely when cut and I think they last a long time. Somehow, a cut blossom from a bulb I’ve watched and nursed for well over a month is intensely satisfying – far more satisfying than buying a bouquet and equally wonderful to collecting colorful blooms from a summer’s garden.

As the years passed, I started taking pictures of the flowers to share with my parents (in Cleveland) but I didn’t give much thought to what I was doing; I watered the bulb, watched it grow and took a picture. In hindsight, I was learning how to force bulbs, engaging in the amazing process and archiving the results. I don’t think I will ever become blasé about nature’s tenacity, mysteries and beauty. Ever.

Courtesy of technology, I learned of a few relatives’ experience(s) with my parents’ gifts. I started asking about their process and collected some pictures. Some relatives save their amaryllis until after New Year’s Day and I think that’s a really great idea.

Whether or not they travel, so they want to be able to take care of the bulb and watch its progress, doesn’t matter. I just think it’s another wonderful aspect to forcing bulbs during the winter months.

Spring flowers can be forced in January and February, announcing a season inside before we see the majority of those flowers in the landscape. Paperwhites, amaryllis, fall crocus . . .. The list continues. How amazing to be able to have the much desired continuous blooming garden because we can bring the garden inside and don’t have to follow the seasonal forecast.

I know many bulb enthusiasts save their bulbs and follow the guidelines to bring them to flower in subsequent years. Maybe that will be my next challenge but for now, I’m not that organized. I dream of that potter’s shed and organization but for now, it remains elusive.

When I look at the photographs I have of previous amaryllis blossoms, I enjoy what those pictures tell me. I think about my mother looking through the White Flower Farm catalogue and making her choice – always based on aesthetics with a little practicality added here and there; she didn’t like long stems that might break, the colors were important to her and she was drawn to new varieties and sometimes, the dwarfs. My mother (Sally) took the process very seriously and I appreciate that. I always admired her aesthetics and it showed in everything she did.

No matter – tall, short, variegated, vibrant, subtle – I love(d) them all. Sometimes I would look at that green pot covered in moss and even though I followed the directions to the letter that bulb didn’t show much promise.

However, just as promised in the directions, with the proper light, watering and waiting (the hard part for me), growth really did begin. Nature will always amaze me. I will always respect Her.

My amaryllis always starts growing slowly. Sometimes I wonder whether or not the bulb’s going to make it or if I got a dud. But once it starts growing, I honestly think I can watch it grow. When the leaves emerge, I know the process begins in earnest but when those buds form, I really get excited. They grow in leaps and bounds – it doesn’t matter how many times I’ve done this, it’s just as thrilling as last year and the year before . . .

When my mother passed away in March 2011, I returned from Cleveland to my house in Bethesda – and saw Sally’s Amaryllis in full bloom. I know, I know – sounds hokey, planned and impossible to believe but it’s true. I walked into the house and…..

I won’t/can’t go into the whole “my mother was present” or “it was a sign of nature’s cycle” because that’s not my way but much, much more importantly, that was not my mother’s way. Reality was her “middle name.” All the same, I sure was thrilled to see Sally’s Amaryllis.

In December, the year my mother passed away, when the box from White Flower Farms arrived containing Sally’s Amaryllis, I was thrilled. It took my breath away. My father continues the tradition with the same consideration, enthusiasm, attention to detail and thoughtfulness they began all those years ago. My dad (David) looks through the catalogue, thinks about Sally’s aesthetics, adds a dash of his own preferences and sets about ordering amaryllis bulbs. With every year, my appreciation takes on new meaning and my visual archive grows.

I’ve been photographing this year’s choice and it has yet to flower. My father selected Lemon Star this year – a new variety that sold out quickly. This might be the year I care for the bulb to resurrect it next winter and I look forward to the blossoms. With two large, full pods full of flowers, I’m sure the selection will be stunning.

Because my house is in chaos with renovations and construction, the window where I keep all of my plants is no longer safe for plants. I probably will end up losing some (Orchid lovers be forewarned) but the amaryllis is one of those things I just won’t leave up to chance. I moved it into my bedroom in hopes of enough natural light and protection. The selfish part of me decided it would be nice to watch the process with a front row seat and it will cheer me up as I recover from some procedures I’m having done on my spine (nothing helps with pain relief as much as the beauty of growing and blossoming plants).

The anniversary of my mother’s passing (yahrzeit) on the Hebrew calendar is 3 Adar. Her name will be read at my synagogue’s services on February 8th and 9th where I will say Kaddish and at home, light a yahrzeit candle to mark this anniversary. On the secular calendar, the anniversary of Sally’s passing is March 8th.

I know there will be an amaryllis bloom; maybe on the plant, in a vase or photographed in my visual archive. Regardless, Sally’s Amaryllis is a special family bond similar to a strong connection to nature’s cycles.

Though I believe the lighting of a yahrzeit candle to mark the anniversary is from Proverbs “The soul . . . is a candle of the Lord,” my soul’s connection is through nature’s mystery, cycle, tenacity and beauty. I don’t think Sally would disagree. I think she would also like the liturgy that says, “As long as we live, they too shall live.”