Plants that multiply are great for filling up gardens without busting the budget, so I asked Larry Hurley to recommend some for our blog readers.   But because self-seeding plants CAN be a headache (or worse), Larry asks us to first be sure we really want them.   Plants that spread from seed will help create a cottage-garden, free-wheeling look that works well in an informal garden but simply creates a weeding problem in a more formal garden.  Okay, point taken.  Now let’s get to the plants!  (All plant text by Larry.) 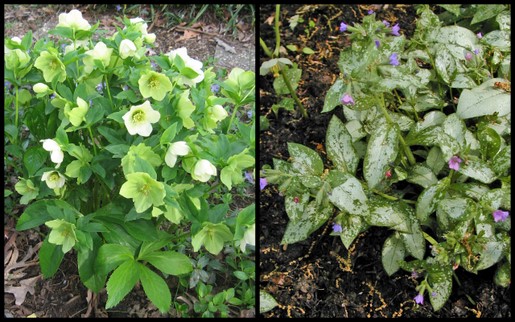 Self-Seeders for the Shade

Hellebores will produce seed and you will get a modest crop of seedlings over time. They stay pretty much right under the parent plant unless you move them.  With many perennials there are some seed dormancy issues: they need some alternating periods of warm and cold temperatures before the seed will germinate.  Hellebores are like that. They also require three years to flower from the time the seed germinates, so it may be five or six years before you actually see blooming plants. They will show a range of flower colors, they are unlikely to be identical to the parent plant.

Lungwort (Pulmonaria) is another perennial that gently sows around the shade garden is  Although there are a number of named clones (cultivars) of lungwort, the seedlings in my garden all tend to look about the same: silver-spotted leaves with blue flowers fading to pink, like the old cultivar “Mrs. Moon.” Not that there’s anything wrong with that.

Virginia Bluebells self-sow over time.  Again it takes several years before you see much happening, but eventually, you will get a nice patch of bluebells if you start with several.

River Oats, (Chasmanthium) is a shade-tolerant grass that spreads very aggressively.  It’s a terrific native grass for part-shade and moist situations, but it moves like the wind; you might want to remove the seed heads before they ripen. Personally, I let it go in a low area and it’s covered about 30 square feet.  I just keep it mowed where I don’t want it go mad.

Agastache, being native to the southwest US, many of its cultivated varieties (especially the orange and pink ones) don’t overwinter well here. The blue- flowered hybrids, which include a Korean species in the mix, overwinter the best here.  I don’t have experience with the seedlings in the ground; however, I have observed that Agastache will sow prolifically into its own pots, and the Agastache that we overwinter will have a carpet of seedlings the next year.

Columbines (Aquilegia) are all seed-propagated plants but many are hybrids, and won’t germinate true to the parents. Mr. Behnke used to tell me that you had two choices with Aquilegia: deadhead and the plant might survive a couple of years, or let it go to seed and allow the seedlings to come up here and there over time, living for a couple of years with their offspring moving from spot to spot.  In the latter case, the parent plant was more likely to die.  I don’t find that they germinate particularly well, but you should find a few seedlings in the second year after the seed ripens.

Asters and Goldenrods are notorious self-sowing plants and because they form tough underground stems (called rhizomes), they are tough to dig up.  You definitely want to deadhead before the wind-borne seed spreads unless you are in a very informal setting.  If they are hybrids, the resulting flowers will revert to mixed colors and sizes.

Spiderwort (Tradescantia) is hard to deadhead because each flower lasts one day and they flower for a long period of time. In my experience, the seedlings of the cultivars, which may be pink or white, generally go back to the wild form, which is blue.  This is another good meadow plant, and another one that is very tough to dig out.

False Indigo (Baptisia) has large seeds and after a couple of years you will get seedlings pretty much around the base of the plant. I don’t have any experience with the new hybrids, but the species like Baptisia australis come true to the parent.  They form a deep taproot, but are easy to transplant when still young.

Purple Coneflower (Echinacea) is the subject of countless of new hybrids, the offspring of which won’t look anything like the parent.  The old pink cultivars like ‘Magnus’ and ‘White Swan’ are different – their offspring will look like the parent, as long as there’s just one cultivar in your garden and there are not others around.  These should naturalize well, and you should start to get seedlings the year after the seed ripens in the fall.

Black-eyed or Brown-eyed Susan (Rudbeckia) also comes in dozens of varieties, the most popular of which is Rudbeckia ‘Goldsturm’.  It’s a seed-produced plant, and as such, should come true from seed in the garden. In fact, in one of the many oddities of the horticulture business, we at Behnke’s were growing Rudbeckia ‘Goldsturm’ from seed that we were importing from Germany.   Our German supplier was getting the seed from a large wholesale perennial grower in the U.S., who was harvesting it from plants growing in pots at their nursery.  Well….I thought it was interesting at the time.  The species Rudbeckias like Rudbeckia maxima and Rudbeckia triloba – anything without a fancy name like ‘Sunshine Ecstasy’ or something like that – will self-sow and come true from seed.

Editor’s Note: Larry finds Rose Campion (Lychnis coronaria) and Maltese Cross (Lychnis chalcedonica) to be vigorous germinators that are “pesty” and suggests avoiding them.  Not me, though!  I love my Rose Campion and can always find a place for the few extra it produces each year.  Maltese Cross I’m unfamiliar with.  SH

Panicum or Switchgrass is a native grass, and it has a reputation as a heavy sower.  The named cultivars are grown for either blue-green foliage (Midwest origin) or red fall color (East Coast origin). The seedlings will not come true, so you will likely want to deadhead; or, again, let it go in a meadow situation.

Editor’s note:  Miscanthus is a large group of grasses, some of which are, in Larry’s words “big, bad invasive plant, primarily south of our region”.  He doesn’t recommend it, adding that we should “Beware of early blooming cultivars which are more likely to produce viable seed here than late blooming cultivars.”  Behnke’s only carries the late-bloomers that have not been shown to be invasive in our area, like the cultivar ‘Morning Light’ that’s been growing in my garden for 15 years now and been well behaved.  SH