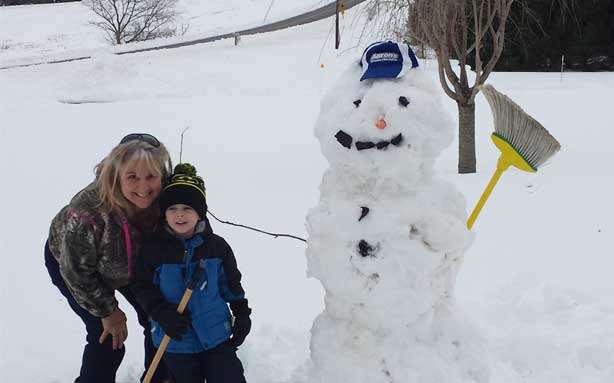 The Groundhog did not see his shadow on Tuesday morning! Legend has it that means Spring is right around the corner!  Anyone who knows me is well aware that I really do not care for snow. I am not a cold weather friend. I guess I spent most of my life worrying about heat going off in greenhouses, or our greenhouses falling down due to heavy snow loads and hours upon hours of digging out. After the BLIZZARD we had last week, we have all–with the help of the weather, and our friends with snow blowers, plows and shovels–finally started to see our muddy grass  and driveways again.

Remember spring is just around the corner! We have that to look forward to. But today, while looking at some photos on my phone, I realized that maybe, just maybe, I have been a little too hasty when I complain about the snow.  Last week our grandson and I would bundle up with Granddad and out we would go. Before I knew it, he was throwing snowballs at us and we were throwing them back. He had his little snow shovel and was helping Granddad dig out while challenging me to make a snow angel. No one could believe it when I actually laid down in the snow and created one truly wonderful snow angel.

The bigger issue was getting back up. Aaron and my husband were no help at all. They just laughed at me while I tried to get up.

Then came the day that the snow was actually good enough to make a snowman.  Out we went again and a snowman was born.  We only found one branch so we made due with a broom; and of course Aaron found an old hat of his grandfather’s that said Aaron on it, so that had to be the hat. We built the snowman to face his house and my husband took this photo of us.  Looking back, we had so much fun just playing in the snow with our grandson. No worries about things. We were not going anywhere and were lucky that our electricity did not go out.

I know it was very hard on some neighborhoods that could not get out right away. They had to wait for the snow plows to come which, in some cases, took days. But hopefully you too got to get out and have a little fun.  And if you are like I used to be and truly dislike the snow…just know, Spring is coming!