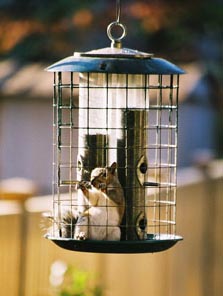 The very word makes many a backyard bird-enthusiast shudder.  Squirrels- synonymous with bird-food thieves – crafty, ingenious little raiders who have successfully thwarted the most inventive “squirrel-proof” bird feeders ever devised by man.  Squirrels – fuzzy, one-pound pirates capable of bringing a 200 pound man to his knees in frustration.

Well, at the risk of incurring the wrath and scorn of birders everywhere, I’m here to say I love those little bandits! Living in a third-floor condominium with a porch/balcony, my bird feeder attracts some wonderful birds that bring me much pleasure. And, as was inevitable, the squirrels also discovered the bounty, even if it is three stories up. Yes, they can be brazen little gluttons, at times so stuffed with bird seed from the feeder that they practically roll off the balcony. But they are also such lovable clowns!

Early this spring, there was only one squirrel who began visiting, obviously a new mom. Looking a little thin from keeping her brood fed, there was no way I could begrudge her some of the birds’ food. Then I noticed that when she was visiting, a shy youngster was peeking over the porch roof watching her. It took several visits before he was brave enough to shinny down the siding to my porch. But finally the call of food overcame his fears.

After a couple of weeks, I realized that mom was no longer accompanying her kid. (She hasn’t been back – perhaps having become a road casualty.) The little one lunched alone for about two weeks. Then I saw one, – no, two!! – fuzzy faces peering down from the overhang. Seems Jesse James brought his nest mates to share the loot! 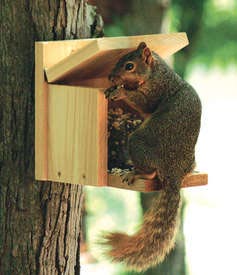 The three litter-mates have now laid claim to my porch. Besides Jesse, the apparent leader of this little band, there is Stubby George, so named because he is missing the top third of his tail, and Nervous Nickie, the shyest of the crew. They scramble around, bouncing off the table and chairs out there, chasing each other around in circles – and, of course, growing quite sleek. With patience, I got them to accept my presence on the porch. They will now take shelled nuts from my hand and sit eating at my feet. The best treat, though, is a little peanut butter on a small piece of cracker. Talk about squirrel rapture!!

All of this crazy activity has not discouraged the birds, either. I make sure that there is plenty of food for them, too. Sometimes they have to work around the James Gang, but that doesn’t appear to discourage them. One cardinal couple has rewarded me by bringing their youngster up to the porch and feeding him (or her) right there. Such a noisy, demanding child!

Before long, I will have to start weaning my little crew of bandits – and the birds, too, for that matter. I will be moving by the end of this year and they all need to find other local restaurants to mooch from. But, oh, how I will miss those three squirrels – those ever inquisitive noses and wonderful black eyes, the little paws that reach up and hold my fingers while they take a treat from me, and the ringside seat I’ve had for their balcony circus acts.

Backyard pests? Perhaps…to some. However, for me, they are a backyard bonus. I hope to cultivate another bandit gang at my new residence – and pray that my new neighbors will be as tolerant as those I am leaving behind