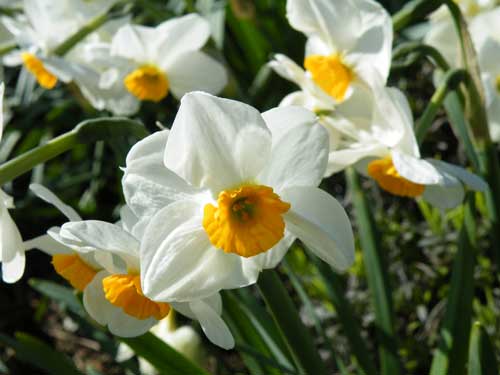 For the urban/suburban gardener, dealing with deer and other warm-blooded garden grazers is generally a case of discouraging their feeding in your garden. You can probably visualize herds of discouraged deer, walking dejectedly down the street, looking for some hosta to terrorize, their little white tails limp. Bad posture and everything. Sooner or later they will feed, it’s just that you are trying to get them to feed elsewhere, maybe on the next street.

One of the weapons in your non-ballistic arsenal is the use of deer-resistant plants. These are plants that have proven to be low on the deer’s feeding preference list. It doesn’t mean they won’t eat them, or try them and spit them out, just that on average, they are more likely to leave them alone when given other choices. For example, for me, Brussels Sprouts are Larry-resistant plants. And I don’t need any emails telling me I’m just not preparing them right, thank-you-very-much.

For deer, the resistant plants tend to fall into several categories—smell strongly (herbs); a lot of hairs on the leaves (often looking silvery); or taste bad/are poisonous. Note on the poisonous ones, that they are likely to be poisonous to people as well.

Most spring flowering bulbs are deer resistant: crocus and tulips are not. But daffodils (narcissus); hyacinths; fritillaria; scilla; muscari; galanthus and ornamental allium are, among others. Just don’t eat them. The alliums are various types of onions so they are strongly flavored; the fritillaria have a skunky odor when handled; daffodils are poisonous, and so on.

Some Other Fiends of the Garden:
If you have problems with squirrels digging up your bulbs, either to eat or just to play with, try placing a wide-mesh chicken wire on the soil surface. The bulbs will grow up through the mesh, and the squirrels can’t dig through it. Once the leaves start to grow through the mesh, you can remove it.

If you have voles (like short-tailed mice) that burrow around and eat some your bulbs during the winter, add sharp gravel or Vole Block (which is sharp gravel) to the soil around the bulbs when you plant them. The idea is that the sharp gravel is hard for the voles to dig through without poking their little noses (squeak!!), and they will go elsewhere where the digging is easier.

So, if the beauty of spring bulbs weren’t enough to get you to plant some this fall, maybe the idea that they can solve some of your “what can I plant that the deer will leave alone?” problems will entice you in to view our selection of fall-planted, spring-flowering bulbs.

Berkleys For The Birds ~ An Etsy Shop