Every once in a while, there comes a plant that has it all; the one thing that most gardeners look for, four seasons of interest.  We are lucky as gardeners to find plants with two seasons of interest, such as the viburnum, with nice flowers in the spring and colorful berries in the fall.  Sometimes, we find a plant with a third season of beauty, like the oakleaf hydrangea which boasts pretty summer flowers, exquisite fall foliage, and exfoliating bark that retains our attention throughout the winter months.  However, it is rare to find a plant that brings beauty and life to a garden for most of the year, particularly in winter.  But green hawthorn may be just the plant. 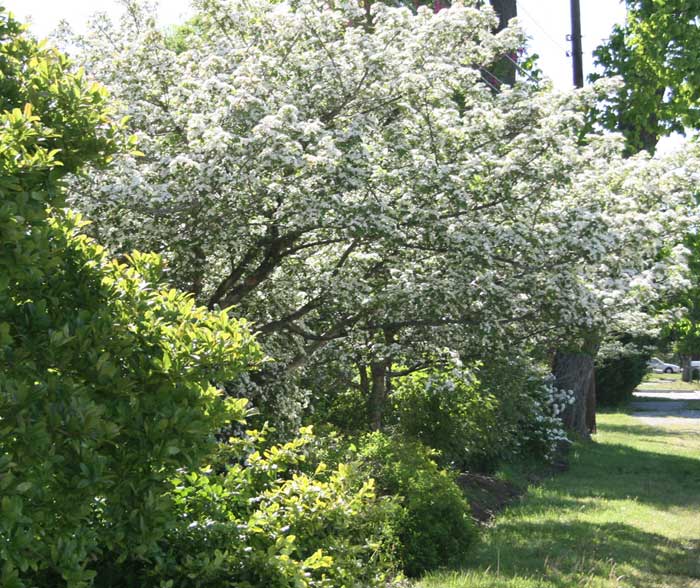 Green hawthorn, Crataegus viridis, is an exceptional native tree.  In the wild, hawthorns are known for their reliability, strength, endurance and ability to thrive in adverse conditions.  Hawthorns are plants that grow in open areas such as pastures, forest edges and old fields and therefore, they prefer full sun.  They are known to endure poor soils, tempestuous winds, and unreliable moisture.

There are thousands of species of hawthorn in the world; hundreds of them are cataloged as viable species.  Why are there so many?  In the wild, hawthorns tend to hybridize within their family of plants, creating many new types of hawthorns that have different characteristics.  Some are recognized as their own species, others are not.  What is interesting is that botanists believe that hawthorns have an amazing ability to adapt very quickly, and that is why they can hybridize so easily.  This means that they are evolving at an explosively rapid rate.  This means that they are true survivors. 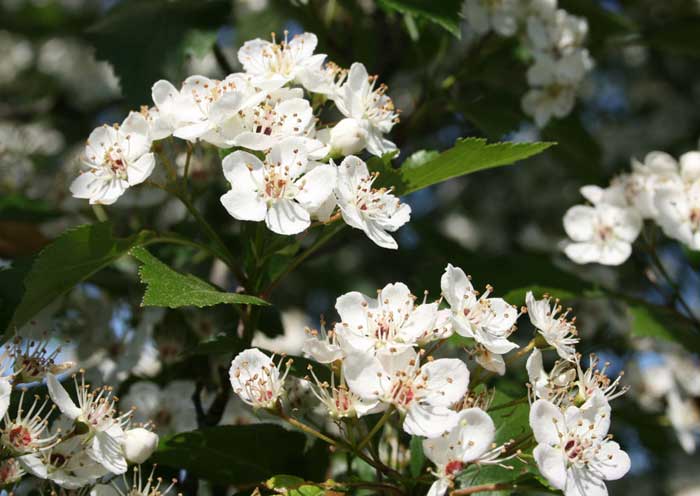 The native wild green hawthorn, Crataegus viridis, is also highly valuable to wildlife.  In mid-spring, the tree produces five-petaled white or blush-pink flowers that are a favorite of many pollinators.  Its glossy green finely serrated leaves are hosts to numerous moths and butterflies.  In fact, this one tree can feed more than 150 species of butterflies and moths, including the Red-spotted Purple, Striped Hairstreak, and Northern Hairstreak butterflies and the remarkable Cecropia moth, our largest moth with a massive wingspan of more than 7 inches. 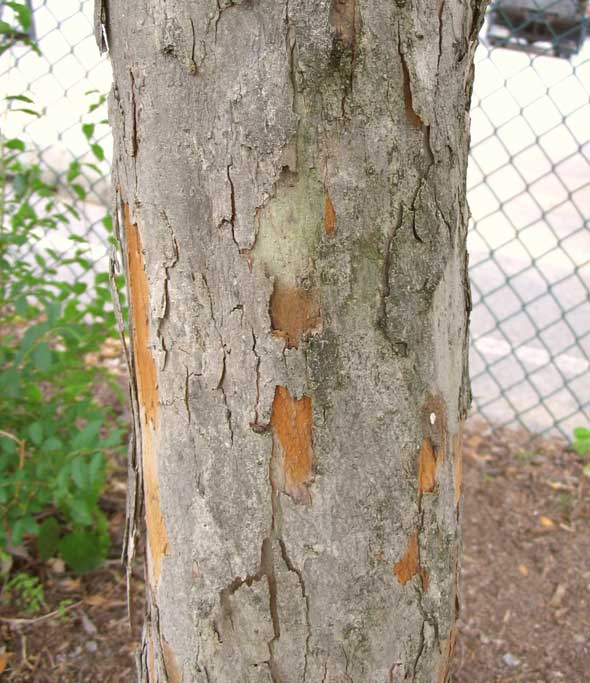 Bird-lovers take heed.  Many bird species love hawthorns.  In the spring, hawthorns bloom at exactly the right time when pollinators are busy looking for sweet nectar and when birds are looking for a tasty insect meal to feed myriad hungry little baby bird mouths.  It is, after all, nesting season, and most baby birds can only subsist on a purely insect diet.    Spring migrants are also looking for high-protein treats.  Do not be surprised to see an Eastern Phoebe perched on a hawthorn branch while intermittently picking off pollinators in mid-flight.  All through the summer, the caterpillars that call the hawthorn host are also food for more baby birds and insect-eating birds, such as warblers, Eastern bluebirds, and flycatchers.

The wild green hawthorn does include the traditional long thorns that other hawthorns are known for.  However, thorns are a bird’s best friend.  Numerous birds find comfort in building their homes in hawthorns.  The tree’s wide canopy and thorny branches are a welcome sign to birds for building cozy, predator-free nests.  If you are lucky, you may even get a chance to see a wondrous and gory spectacle.  Hawthorns are a favorite tree of the loggerhead shrike.  A medium sized gray bird with black striped wings and tail, and a black stripe across its eyes, like a batman mask, the loggerhead shrike is an interesting character.  Preying on insects, small amphibians and small mammals, this bird lacks talons to hold its meal, and therefore finds the thorny hawthorn to be of great service for holding onto dinner.  Not unlike Prince Vlad of Romania, who was known to impale his enemies and who was the inspiration for Bram Stoker’s novel Dracula, loggerhead shrikes are also known for impaling their catch on thorns to stake out their territory.  Now that would be a conversation piece with the neighbors! 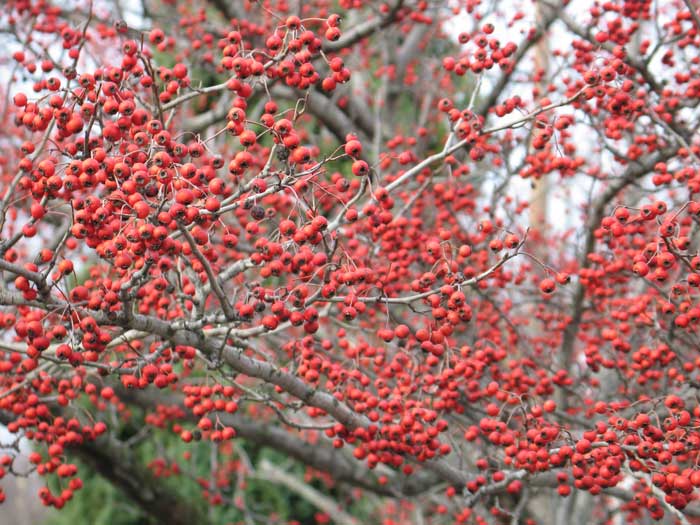 Of course, hawthorns are also very well known for their fruit.  In early fall, hawthorns are typically covered in bright red or orange fruit, the size of rosehips, and since they are not particularly tasty to birds until late winter, gardeners are able to enjoy the fruit throughout most of the winter season.  Hawthorn fruits are a favorite of cedar waxwings, blue jays, catbirds, mockingbirds, grosbeaks, flickers and thrushes.  In fact, more than 35 species of birds readily consume the fruit in late winter.  In addition, many small mammals find nourishment in hawthorn fruit, including a nocturnal visitor, the flying squirrel.

However, wild hawthorns are usually difficult to find and can be susceptible to leaf diseases, which although does not harm the tree, could make the tree lose its leaves prematurely.  One hawthorn cultivar to try is Crataegus viridis ‘Winter King’.  In addition to still being able to attract pollinators and providing fruit for birds, ‘Winter King’ has many additional attributes.

Remember that four-season plant I mentioned in the beginning of this article?  Well ‘Winter King’ is just that.  Starting off in mid-spring, ‘Winter King’ envelopes itself in dainty blush pink flowers, resembling miniature single-petaled roses.  In summer, its leaves are dark green, glossy, and disease free.  ‘Winter King’ has proven to be very resistant to leaf problems.  In fall, ‘Winter King’s glossy green leaves turn to yellow with flecks of purple and maroon.  Its fruit also starts to color up and becomes a bright show-stopping red, larger than its wild cousin.  In late autumn, when leaves drop, the tree’s true form is exposed with its peeling cool silvery gray bark which unfurls to flaunt a warm cinnamon interior. And this is when it hits you.  Striking red large fruits dangling from every branch, dual-toned peeling bark; this tree is aptly named.  It is the king of winter. 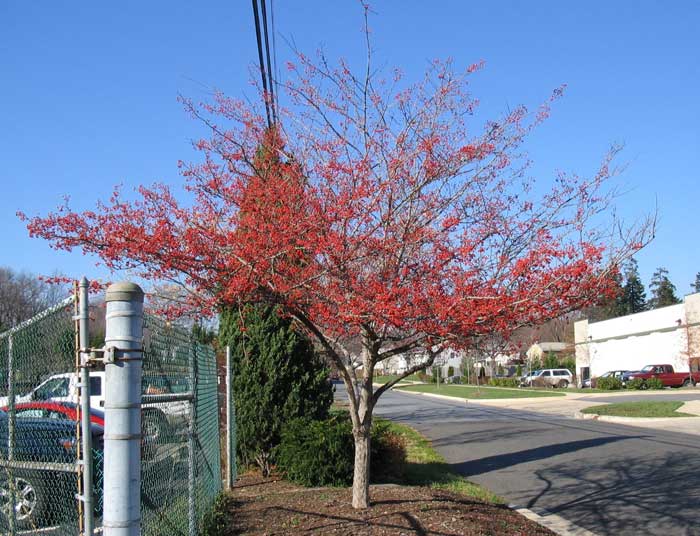 ‘Winter King’s’ structure is vase-shaped and rounded with its crown being wider than it is tall.  Growing to about 25 feet in height, it is a small to medium sized tree and can be used in a group planting or in a specimen planting.  Be sure, however, to plant any hawthorns in full sun, since they will be more susceptible to leaf afflictions and produce less flowers and fruit if they are positioned in a shady area.  In addition to all of its beauty and ease of culture, ‘Winter King’ does not have the long, sharp thorns that its wild cousin does.  Although it is not always completely without, the thorns it may possess will be small and few.  So if thorns are your concern, do not be concerned with ‘Winter King’.  Although without the thorns, you won’t get the very cool loggerhead shrikes either.

So go ahead and try the green hawthorn in your landscape.  Fall and early spring are a great time to plant trees.  Just remember to give it sun and then stand back and watch the four-season show.