We often say that a particular plant needs “good drainage” in order to survive in your garden.  What we mean by drainage is that when water is applied to the soil—by rainfall, or a hose—some of the water drains from the soil leaving tiny air pockets.  Drainage is a function of gravity and the size and quantity of air spaces in the soil.  The gravity part is straightforward; gravity pulls water downward through the soil, just like water runs down your body in the shower instead of up toward the ceiling. Imagine the shower again. If you had many tiny holes in the floor instead of a large drain, the water might drain more slowly out of the shower. Sandy soil drains quickly because it is coarse and has larger air holes, while clay soil drains slowly because it packs tighter and has smaller air holes.

Expanding on the gravity part: Water always flows to a lower point. It drains down through the soil until it hits a less permeable layer; e.g. rock, and then it may move sideways, appearing somewhere downhill as a spring. If the water is applied to the soil surface more quickly than the soil can absorb it (thunderstorm), it flows along the surface to a lower point.  The water then sits at that low spot until it percolates through the soil.  If it drains slowly, you have yourself a pond. 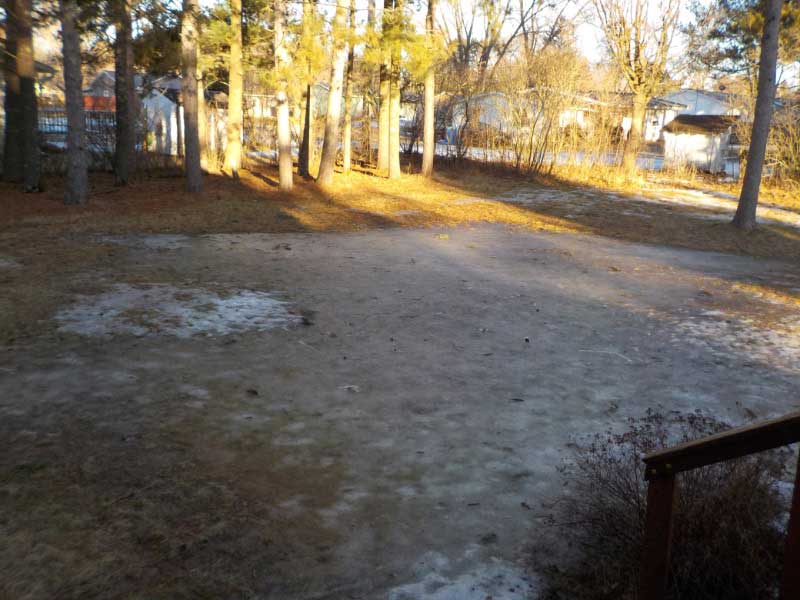 So what? Plants need oxygen from the air in the soil for the roots to do their job.  When the air spaces are filled with water, excluding air, roots may begin to die, and certain soil fungi will also attack the roots.  The results are root rots and dying plants.  Some plants, those that need “good drainage” are particularly susceptible to root death, especially in the winter when even soils that normally drain well may become saturated.  In the accompanying picture (above) from the sand counties of Wisconsin, this normally well-draining sandy soil is in a low spot, and water has ponded here because the soil is frozen even though the air was warm enough to melt the snow on the slope. Plants that like good drainage would be happy on the slope, but would likely be killed in the low spot. 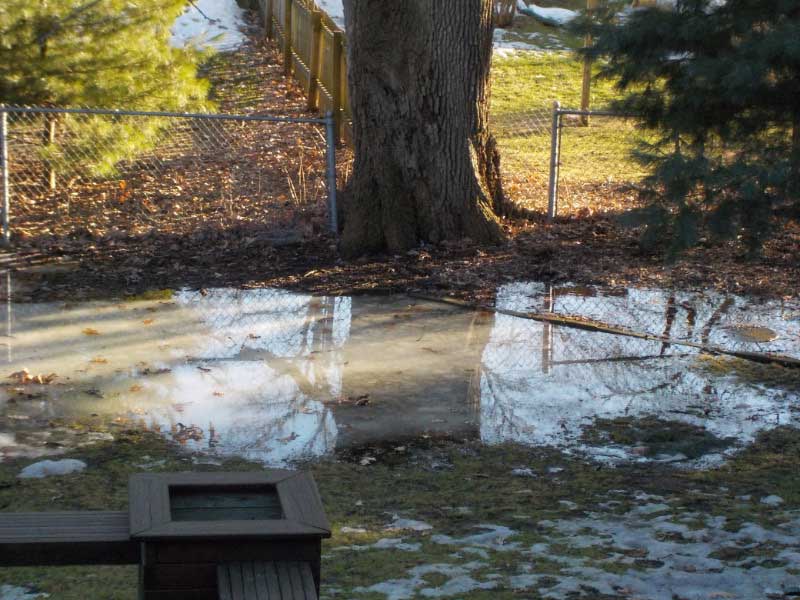 The other photo is a loamy prairie soil in Wisconsin, which should drain pretty well, but because it’s the low point in the yard, water ponds here and the owners have a difficult time planting in this area.  They have the same issue this winter as the sandy soil, with the water draining to this spot and then icing over.

So: for plants that need good drainage, planting on a slope or in a raised bed will be beneficial, especially if you have a clay soil, because gravity will work upon the water to move lower, drawing air into the soil.  Amending the clay soil with compost or another organic soil amendment will improve the soil structure over time, resulting in larger pores.  But if it’s in a low spot or even just flat, you will have more trouble with plants like lavender or rosemary than you will if you are on a gentle slope or in a raised bed, because of the benefit that gravity will provide.