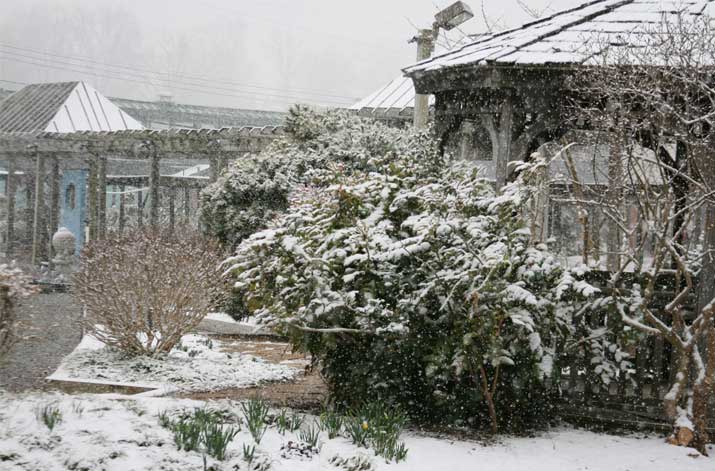 After a warmer than usual winter, capricious Mother Nature poured cold water on our spring parade.  When the snow melts and the temperatures moderate, what should we expect?

With low temperatures in the teens and below freezing temperatures for much of this week, flowers that were open are deader than a Monty Python parrot. This includes magnolias, camellias, forsythias, cherries…they will just turn brown and hang forlornly from the branch.  This in itself doesn’t cause any long term damage to the plant, but it’s going to be tough on early season pollinators.

Flower buds that haven’t opened may or may not be damaged.  It depends on the species and how far along they are in development.  Hydrangeas that only flower on last year’s growth may not bloom this year, but the ‘Endless Summer’ and similar new varieties that bloom on old and new growth should still put on a show.

Newly emerged leaves and shoots may also have been killed (hydrangeas again), and there may be some dieback of the ends of some older branches.  Luckily, shrubs and trees have dormant buds further down the stem that will begin to grow later this spring if the branch tip has died.  Once we get to the end of April and the long-range forecast is for no more freezing temperatures, you can prune out the dead wood.  Not sure if it’s dead or alive?  If you scrape a bit of the thin outer layer of bark off of a small branch with knife or your fingernail, it should be green immediately below the surface.  If it looks like a toothpick, it’s dead.  If it’s green, it’s still alive and if the plant is strong enough, it will produce new growth.

Anything that is marginally winter hardy here, like rosemary, is touch and go.  You may find that the tops have died but there are buds close to the base of the plant that start to grow when it gets warm in May, so don’t be too eager to remove the plant.  Crape myrtles can die to the ground in a severe winter, yet may sucker from ground level, grow, and flower by mid-summer.  I would wait till early June before giving up.

Bulbs and perennials: you will have cold damage to plants that have emerged too soon.  If not from the cold, then the heavy snow has likely broken stems.  Daffodils will take some light snow without complaint, but I think that this will kill the open flowers.  My hellebores are looking pretty perky so far; we’ll see what happens.  Perennials that have not emerged yet (aka the “smart perennials,” like butterfly weed ) should be fine.  Foliage on bulbs, daylilies and other perennials that have emerged may be burned back at least part way, it will turn brown or white.  Again, it depends on the species; I’m not worried about Virginia bluebells, but if any of your hostas were up, they will be burned back to the ground.   Damaged foliage can be trimmed off if you have time.  The perennials should just go ahead and send up more leaves later in the season and the cold should not affect summer bloomers.

Evergreens, especially broadleaf types like camellias, rhododendrons and hollies may show some winter burn as a result of going into the cold stretch with dry soil and accompanying high winds.  The wind removes water from the leaves and with the cold the plant can’t replace it, so the leaves turn brown at the edges; or the entire leaf or shoot may die.  These may be pruned off later in the season, or they may just fall off on their own.

For anything recently planted, watch out for frost heave.  When the ground freezes and thaws, anything that isn’t well-rooted may be squeezed out of the soil, like rocks in a farm field.  If you planted pansies or hellebores a couple of weeks ago, they may be partly or fully out of the ground, with the roots exposed to the cold and drying air.  Roots tend to be less cold tolerant than tops, and they of course really hate drying out.  So you need to walk the area as soon as the snow melts and replant anything that has heaved up.  And gather a pocketful of rocks at the same time, in case Mother Nature happens to stroll by.