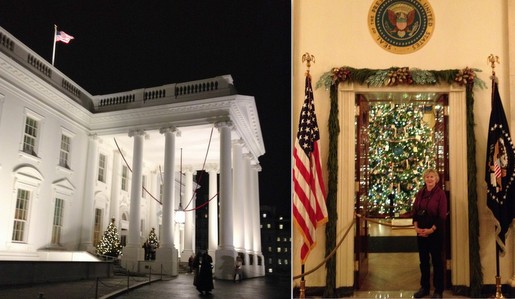 Seasons greetings from the White House!  Yeah, that’s me standing beneath the presidential seal (major photo-op) and I know you all recognize the grand north entrance.  If I’d planned ahead and contacted my congressman I could have taken the White House tour with the general public BUT for some reason cameras aren’t allowed during them.  (Holiday bummer, right?)

Then eureka – an invitation to tour AND photograph the White House was sent to all staff and volunteers for the National Park Service, so this past weekend, on a ridiculously balmy night, I was there. The White House is decorated with over 30 indoor trees, and the decorations took over 100 volunteers several days to put up.  Hey, I wonder how you get on THAT volunteer list! 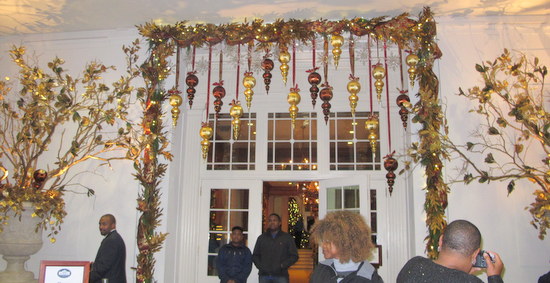 We entered here and the nonstop photographing was in full swing.  LOVE the over-the-door decorations here. 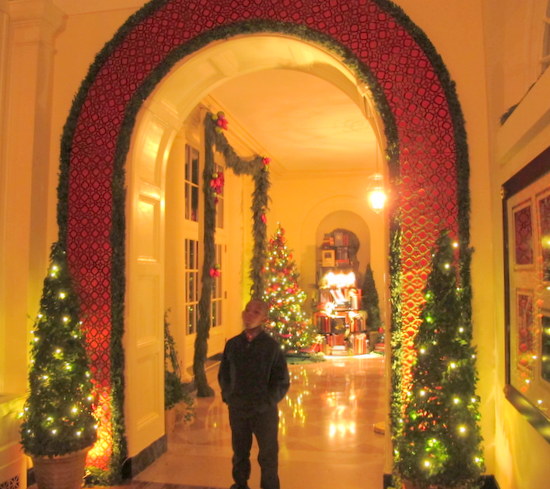 Another happy visitor and beyond, the book tree, close-up below. 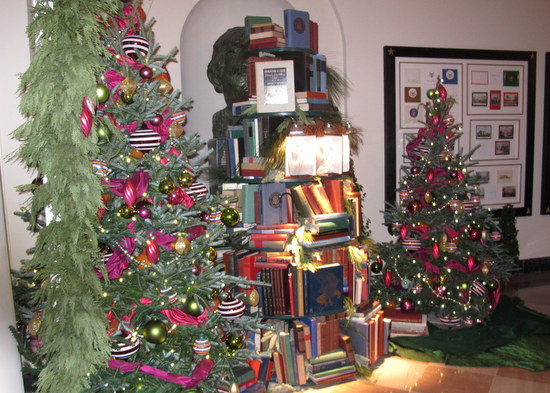 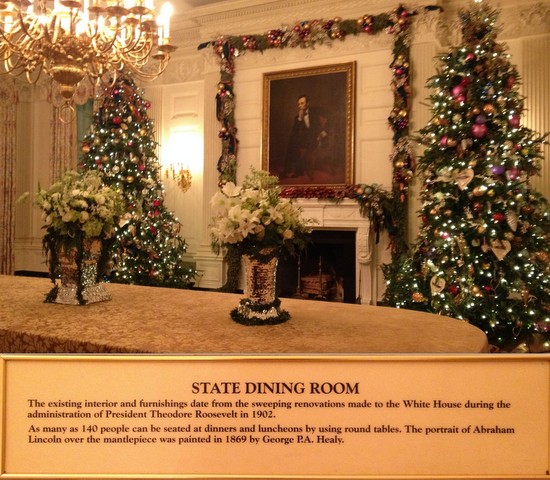 All the decorations were fabulous, but my favorite part of the tour was hearing about all the famous and not-so-famous things that happened in each room.  For example, the State Dining Room has hosted thousands of grand events, but also something we can all identify with – Amy Carter roller-skating in it, a lot.  So often, in fact, that the floors were ruined and had to be replaced.  Okay, too bad about the floor but hearing this made me wonder if she was lonely, the only child young enough to live here with her parents. 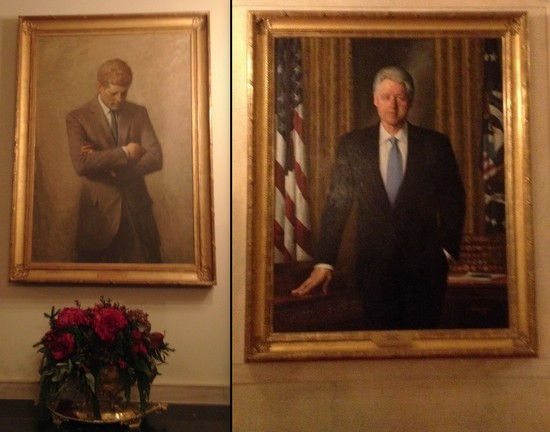 And these famous portraits brought back memories. 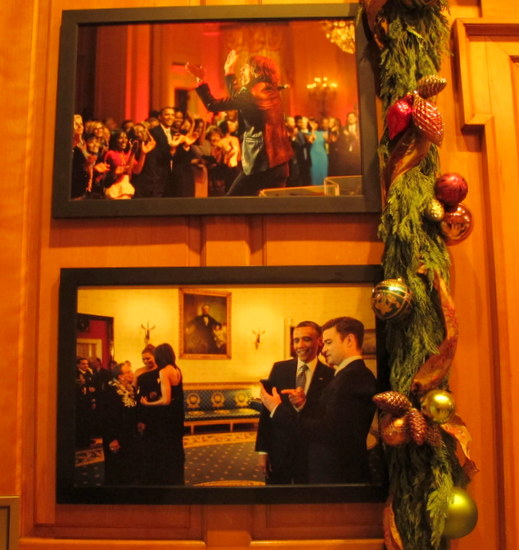 These photos of recent holiday events just made me wish I’d been a fly on the wall – rocking with Mick Jagger and having Justin Timberlake show you photos on his phone! 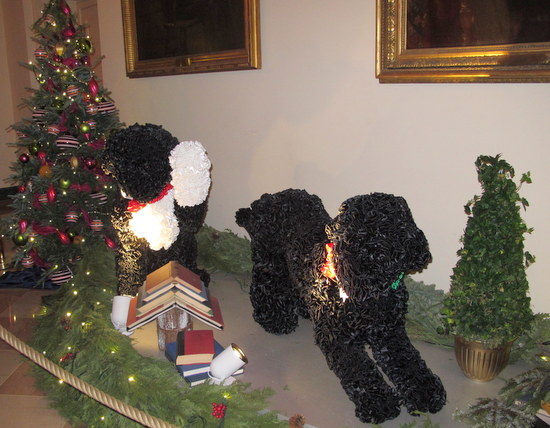 Presidential pets are always featured in holiday displays, and Bo and Sunny here got lots of attention.  They’re made of ribbon. 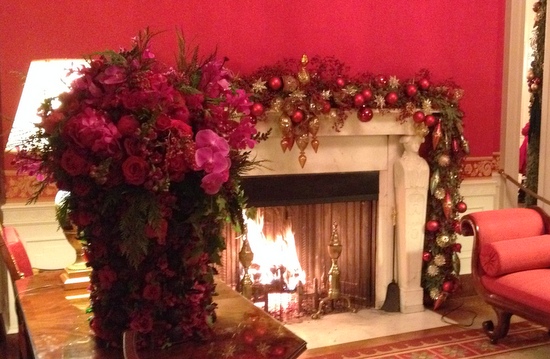 The Red Room featured vases that contained real flowers but the vases themselves were covered with a sugary paste, which a tour guide told us looks better than it tastes.   Close-up below. 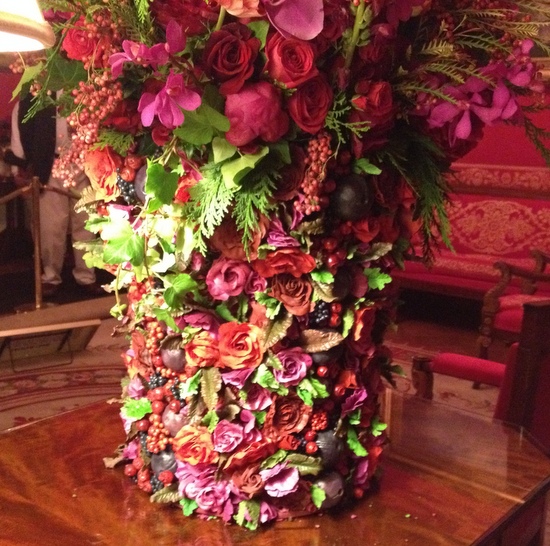 Now for some photos courtesy HGTV, which commissions a local photographer to document the White House every Christmas, and broadcasts specials about the decorations. 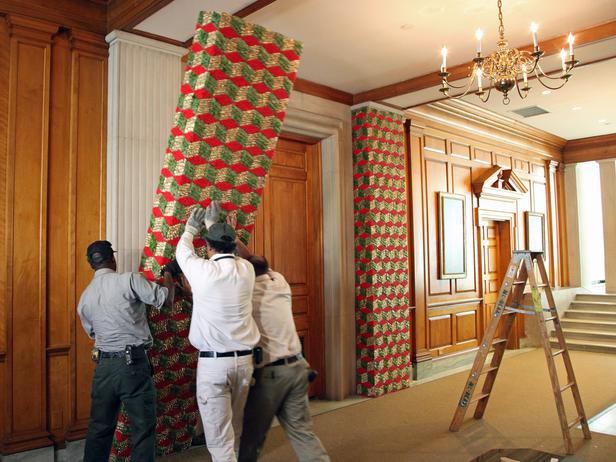 The East Entrance column covers took a team of approximately 40 volunteers more than two months to make. Each cover was constructed over a plywood base using a total of 60,000 berries, 15,000 gold pinecone scales and 15,000 pieces of lemon leaf.  These intricate column covers feature elegant berry, pinecone and leaf designs intended to form a 3-D geometric motif of “illusion cubes.”

Detail below by yours truly. 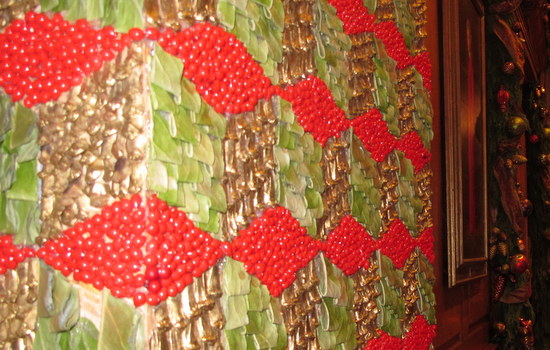 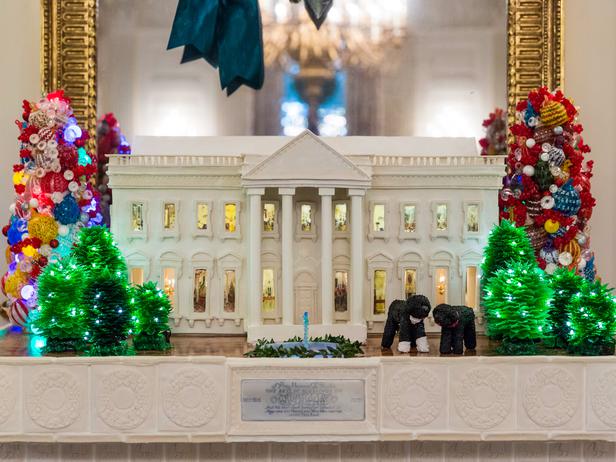 The gingerbread house features Bo and Sunny, with trees made from pine cones found on the White House grounds.  The fountain actually spouts water!

Watch the construction of the gingerbread house on this video. 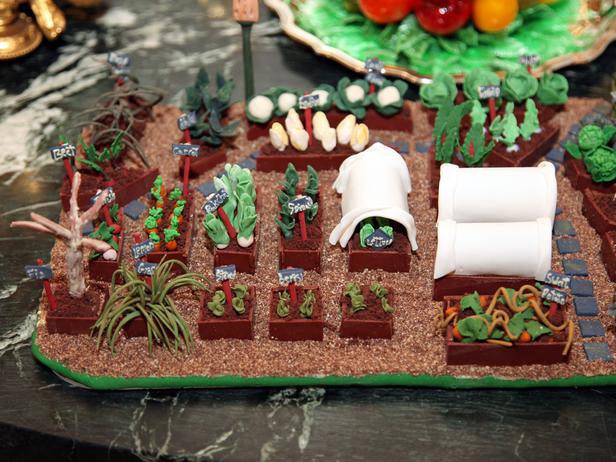 The gingerbread house features its own miniature (edible) veg garden. 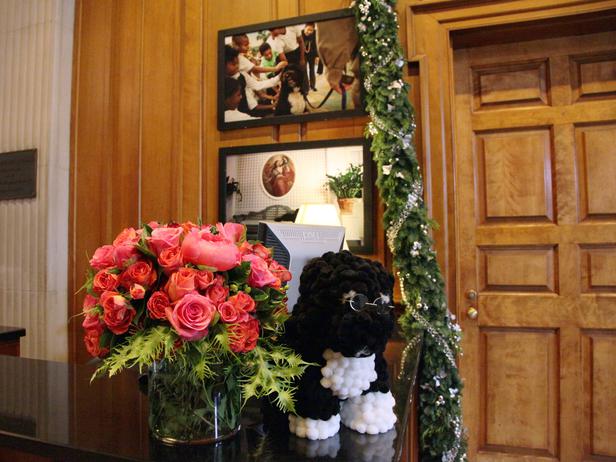 HGTV has a compilation of Bo decorations over the years here.  The Bo above is made of cotton balls, and the one below is constructed of buttons.

This last Bo is made of plastic garbage bags! 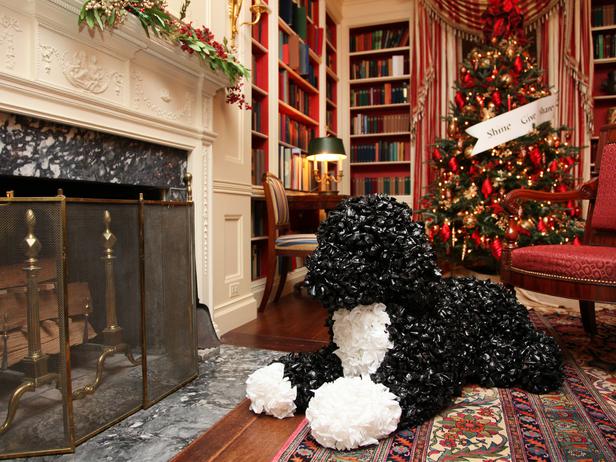 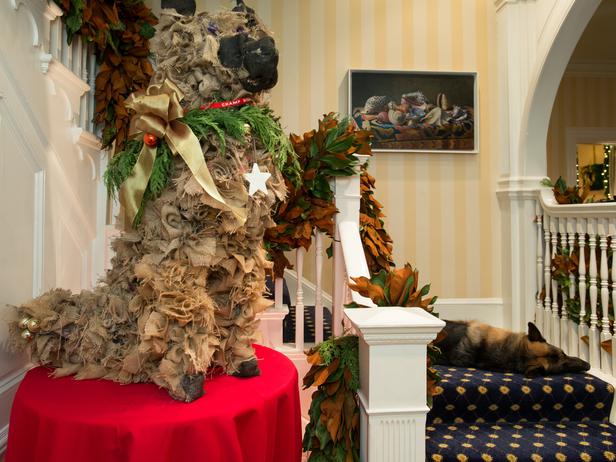 The Bidens’ dog Champ can’t compete with all that attention, but he DOES get this one replica, made by a volunteer.  Champ, sleeping on the stairs here, seems unimpressed.  From HGTV’s Vice President’s Mansion tour.

After leaving the White House I stopped to admire the view down Pennsylvania Avenue toward the Capitol and below, the official White House Christmas Tree. 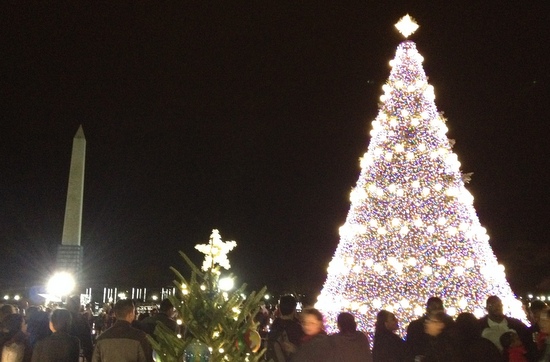