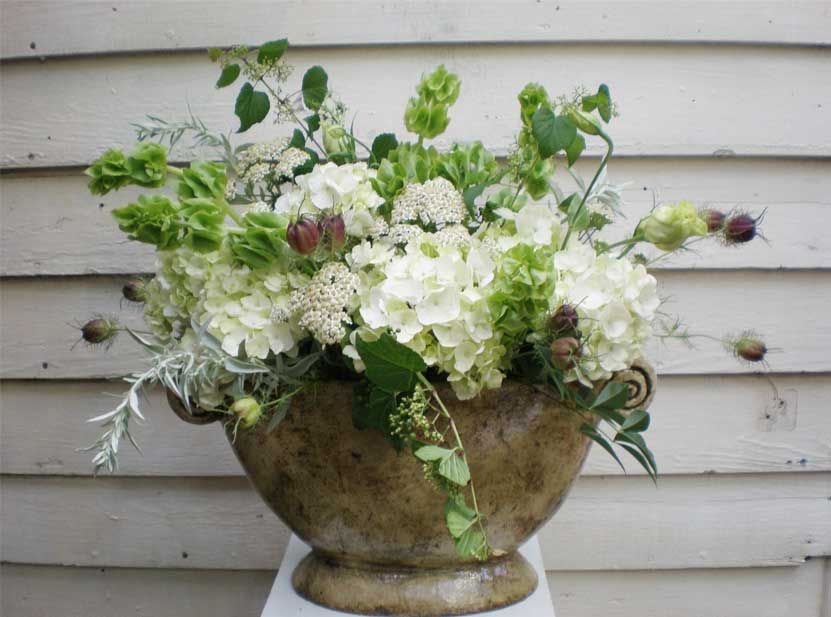 “The plane is a plane; the steamship is a steamship; the motorcar is a motorcar, and the more they are and look just that very thing, the more beautiful we find them.”
-Frank Lloyd Wright, “Modern Architecture: Being the Kahn Lectures for 1930”

The above quote appeared in a decorating a magazine, perhaps ten or more years ago. It was used in a car ad.

I spent over 20 years as a florist in a city with many examples of Frank Lloyd Wright’s architecture, one of which was a Unitarian Church.  I frequently designed arrangements of greenery (no flowers) for the sanctuary… this was their “preferred look”…a naturalistic look that would “not offend” the primarily stonework interior of the church.

Although I am not really a fan of Wright’s architectural designs, something in the wording of the quote struck a chord…a sense that his words had validated my thoughts about floral design.  Since the quote was from 1930 it was clear to me that the reference to a “motorcar” would be what we call classic cars.  (Ever watch Jay Leno’s Garage?)

Well, the word classic sent me to dictionary where it became quite clear that there are many variations on how classic can be appropriately used, including references to literary works of ancient Greece and Rome.  So I quickly moved on to the definition that included “authentic” and “a typical example” and “a work of enduring excellence.”  I feel quite sure that in addition to finding the planes, steamships, and motorcars of this era quite beautiful, that FLW also believed the visual designs of each “were works of enduring excellence”.

The Frank Lloyd Wright words that validated my thoughts about floral design are: “the more they are and look just that thing, the more beautiful we find them.”  Most floral designers have a favorite design style even though they are capable of creating designs in a variety of styles.

My favorite is a naturalistic style…preferably in a somewhat rustic container.  Humor me while I quote myself from a previous blog article. “I love the simple beauty of flowers, not art created from flowers.”  Flowers have natural beauty and when placed in a container that is compatible with the chosen flower types and the proper floral design, the overall effect can portray a very authentic quality.

I will never know, but I hope that Frank Lloyd Wright would approve of the greenery arrangements that adorned the sanctuary of the Unitarian Church.  I tried to make them “look just that very thing.”