Just as we’re all going gaga over the (finally!) emerging spring bulbs, let’s pause to appreciate some flowers we’ve been enjoying for the last couple of months, those of the Hellebore family.  Hellebore breeder (and author) David Culp visited Behnkes during our recent Spring Open House and used these and more fabulous photos of his own Brandywine Hybrids to make the point that Hellebores more than earn their place in our hearts and gardens.

The Virtues of Hellebores

David explained that the Hellebore’s so-called flowers we’re enjoying in winter are really not flowers at all – they’re sepals, colorful parts that attract pollinators.  In fact, they’re getting more and more colorful these days, with breeders choosing sepals that are in colors like pink and purple, and less green.

About their Nodding Nature

Breeders are always working on developing Hellebores whose flowers face UP, so we can see them without bending down, but David has a different take on that.  They’re just “hiding their sexual parts from the cold.  They’re smart.”  David actually likes that slight nod.  You have to bend over and turn it up to see the inside, so the Hellebore is a participatory plant (love that term!)   You can avoid having to bend down to see the insides of their flowers by planting them on a hillside, or in a raised bed. 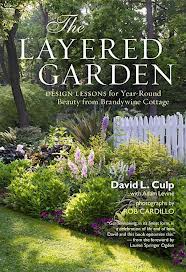 Just cut off their old leaves in January, a bit of housekeeping that isn’t required but lets the emerging flowers shine on their own.  They don’t need dividing, though they can be divided if you wish.  Just dig them up, wash the soil off, and separate into chunks that have both dark and white root, and at least two leaves.  Late summer or spring are the times to divide them.

That’s what David calls them, because they’re so well adapted.  They’re originally from Central Europe, mostly the Balkans, at higher elevations.

They’re all from his very own garden, which is revealed in beautiful photos and inspiring text in his recent book The Layered Garden.