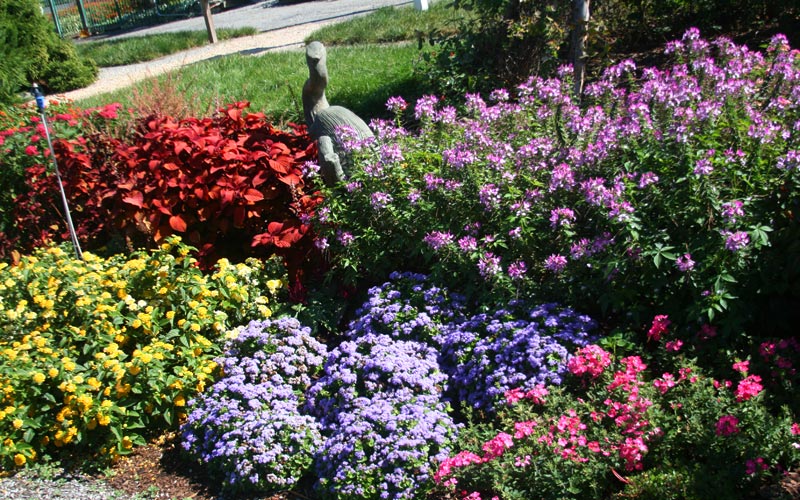 It’s evaluation time to see what still looks good this late in the season in our rain garden and pollinator gardens.  First: the annuals,focusing mainly on the failures and the successes.  These were planted in May (best selection of summer annuals at our garden center is from late April to early June).  For annuals, it’s a question of making it from the hot summer to the (usually) cooler temperatures of the fall.  Recall that we had regular rainfall for most of the summer, and August temperatures were cooler than normal.  We then got hot and dry in September although of course, we water as necessary to maintain an attractive planting.

I planted three selections of Zinnia.  We pulled out two of them during the summer because they got ratty (a professional term; they suffered from plant fungal infections which is not atypical of Zinnia).  The third,  Zinnia ‘Zahara Starlight Rose’ is still blooming but we were disappointed that this cream and pink two-tone had almost no pink during the summer, since we were shooting for pink in that corner of the garden.  We have some seedlings coming up from the Zinnia ‘Magellan Orange’ and ‘Magellan Red’ that we removed; we will probably get some blooms from them if we have a late frost. It’s not that zinnias aren’t beautiful flowers, but in the average garden they will probably need to be replaced sometime in the season.  Luckily they bloom within a few weeks of sowing seed so you can do multiple crops in a year, preferably rotating locations with something else you have removed rather than planting zinnias right back into the same spot.

Also removed because they became unattractive—Basil ‘Amethyst’ but you expect that from Basil by late summer; Cosmos Sonata Mix (also disfigured by fungus) and Sunflower ‘Firecracker,’ which we replaced with dwarf Spiderflower, Cleome ‘Cleo’ in the middle of summer when the sunflowers were done blooming.   The sunflowers are very popular with bees while they are in flower, but the flowering period is limited to a few weeks. 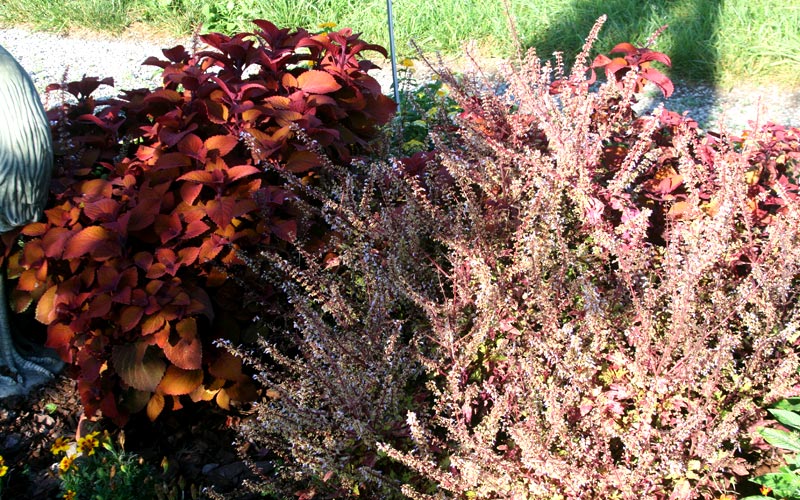 Looking terrific: sun-loving Coleus and Perilla ‘Magilla Purple;’ blue Salvia in the Sallyfun series; red Salvia ‘Red Hot Sally;’ and all the Lantanas.  Behnke’s gardener Stephen Rick planted big beds of Lantana at our front entrance on US Route One, and they are spectacular, as are those in the pollinator garden.  An invasive species in warmer climates where it overwinters, lantana really performs well here.  Our intent was to allow some of the Coleus to flower to attract bees; it looks like a totally different plant with an abstract form; you can barely see the foliage.  Egyptian Star Flower, Pentas ‘Grafitti Rose’ was also a winner. 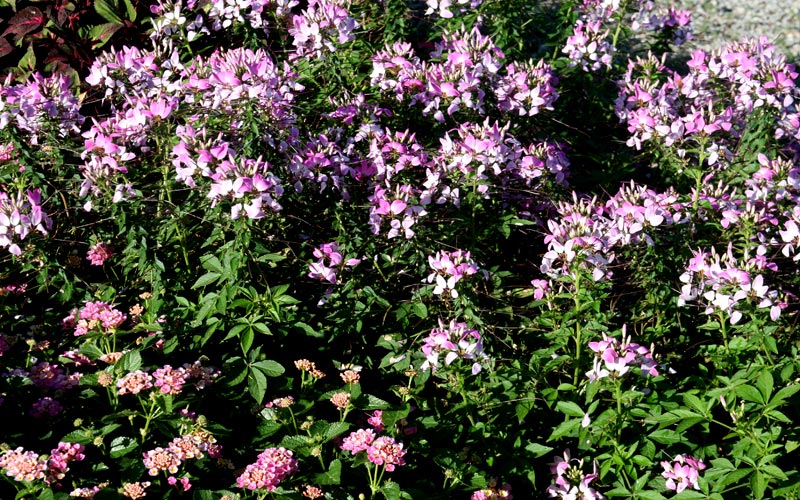 We have a honeybee hive on the property, and we also get many bumblebees and other pollinators in our gardens.  It seemed that the bees in general preferred the perennials to the annuals.  Of the annuals, at this end of the blooming season, the honeybees love the Spiderflower (Cleome) first thing in the morning.  I don’t find the plant attractive in pots in the selling season, but once planted and established, this dwarf form is really attractive, and it’s the bees’ knees to the bees.  The bees also like the lantana.

How Old Is This Geranium Anyway?

I Need Some Pansies