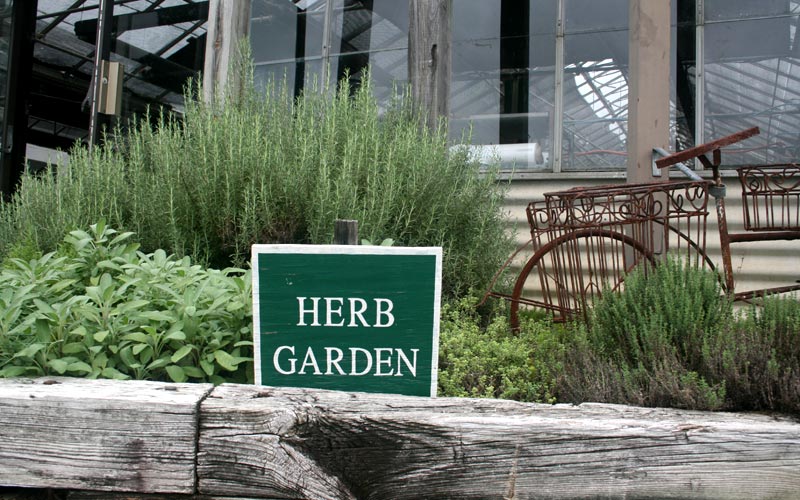 About five years ago I adopted a couple of small planting beds at one of the exits from the Behnke cashier stations to the parking lot.  I thought we should have an herb garden, mostly because I was looking for an excuse to plant basil.  I have mostly shade at home, and, while I can grow basil in a pot, it doesn’t get enough sun and heat to really taste basily.  Although it’s late in the season (mid-August) we have an excellent selection of herbs still available at Behnke’s if you want to get a start on an herb garden.

The beds are raised beds, against the greenhouse, with potting soil, and have been in existence for many years.  They drain well, and with most of the coarse organic matter of the original potting soil having long ago decayed, the soil is very finely textured and dries out quickly.  Herbs in general prefer good drainage and are drought tolerant, but we do have to water a couple of times a week when it is dry.

The beds face the south so they get plenty of sun.  Most herbs prefer day-long sunshine.  Because they are against an unheated, uninsulated greenhouse, the soil and air get some additional heat radiating from the building in the winter.  We have a rosemary planting against the building, and the combination of heat, sun and drainage have been kind to it.  We had a very severe winter a couple of years ago which killed two of the three plants.  I replanted and we again have a large rosemary shrub, which even flowered this year.  Lavender, which should be happy in the same conditions is less forgiving.  I’ve only had one overwinter, but it flowered up nicely this year (variety ‘Dilly Dilly’).  Lavenders are fussy about the winter but also fussy about the summer, detesting our humidity, and easily succumb to disease and poor drainage.  I added some French lavender this year, which is annual in our climate.  No flowers yet and Winter is Coming!

Each year I plant a couple of lemon grass, which we sell as small plants in 4 inch or 6 inch pots.  It grows quickly, and three months later it’s four feet tall and a nice blue-green color.  It would be a nice ornamental grass in a container (although it has never flowered).  It is not winter hardy.

I always plant a dozen or so basil of several varieties. My favorite is the Genovese which is a great basil for pesto.  I always plant some Thai basil, which grows well and has a nice purply cast to the leaves, but I don’t care much for the flavor.

In the realm of herbal garden thugs, we have spearmint and oregano.  The spearmint gets some shade and more water than the rest of the garden. It is pretty well confined, otherwise it is almost impossible to control.  It can even escape into the garden through the drainage holes in the bottom of a pot, so you must be careful with mint.  The oregano also spreads aggressively, and really, how much can you use?  A saving grace is that the honeybees go absolutely crazy for the flowers, which must taste like honeybee pizza.  Probably a good one to keep in a pot.  Speaking of mint, I put in a couple of Calamint (Calamintha) which is a mint relative with pleasant little white or bluish flowers and minty foliage.  I was fond of it because the bees really enjoy it; however, it has proven to be an aggressive seeder, with seedlings popping up in the bed and as far away as the rain garden which is a hundred yards away on the other side of the parking lot.  So use caution when planting.

Chives are easy to grow and we have a clump about one foot square.  To prevent it popping up all over the place remember to remove the spent flowers before the seed ripens.  It would be a real headache if you allowed it to seed out.

I haven’t learned the secret of sage. It always looks nice the first year, but for me, it doesn’t overwinter well.  And, if it does, it gets woody stems that are pretty scrawny. It also doesn’t like a hard trim in mid-summer to keep it in bounds. So I just replant it every year. 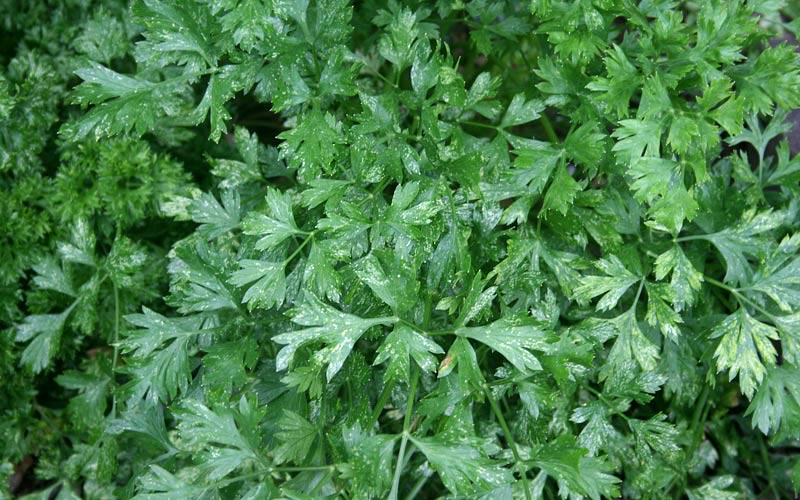 Parsley, which is biennial, is easy to grow and ornamental. It’s another herb that I think would look good in a mixed decorative container.  In our location, I have trouble every year with leafhoppers, which are little white sucking insects that cause a stippling of the foliage.  It has the classic foliage in year one, and in the spring of year two it goes to flower.  The flowers are not showy (sort of a beige Queen Anne’s Lace) but the pollinators go crazy over them so I leave them in until the flowering is done and then remove the plants. Swallowtail butterflies will sometimes lay eggs on parsley, and you’ll get some pretty caterpillars enjoying your parsley with you.  Leave them be!

Thyme overwinters pretty well, but gets overgrown and unattractive.  It can benefit from a good trim in spring when new growth has begun.

A new pest for us this year is an infestation of whiteflies, noticed for the first time today while I was weeding.  I will try to control them with a horticultural soap product, spraying under the leaves early or late in the day when the whiteflies have settled in, following label instructions, and repeating three or four times for best control.

In general, herbs are considered to be deer resistant.  Remember that just because something is called an “herb” does not mean it’s edible.  Some herbs are “medicinal” herbs, so as with any plant, know what you are doing before you start chewing on it.