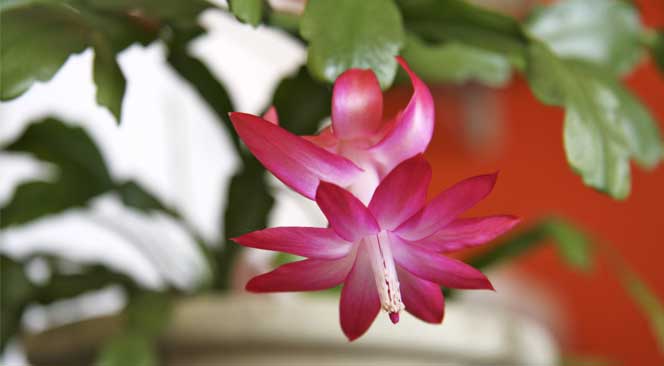 Several years ago, I gave a Christmas cactus to Patricia, who has the office across the hall from me.  After effusive thanks she parked it in her office window, pretty much ignores it most of the year, and sometime in late November it starts to bloom and continues to bloom for several weeks.  This has made me somewhat of a plant gift hero.

I like Christmas cacti because of all the types blooming houseplants, it’s the one I think is easiest to re-bloom.  I have never done well with African violets (which is heresy around here); I don’t quite have enough light for orchids. But Christmas cacti: very easy.

Christmas cacti may also be called Thanksgiving cacti or Holiday cacti.  Or Bob.  Or Mr. Bloombottom, if you’re the sort of person who likes cute pet names.  Two species of Holiday cacti occur in the wild, and they flower at different times; most of what is grown commercially are hybrids.  They come into flower here in November or December, depending on their genetics.  They are truly cacti, which means they are members of the cactus family.  Membership in a plant family is based on similarity in flower structure, so we have the orchid family, the lily family, the mint family, and so on.  The cacti are also succulents, which means that they have the ability to store water and reduce evaporation to cope with sporadic rainfall, most cacti being desert plants.  One of their adaptations to drought is that most cacti either have no visible leaves, or they have small leaves that appear on new growth and then fall off. Photosynthesis is instead carried on in the stems and branches.  Looking at a Christmas cactus, you see a bunch of green stems and branches, but no leaves.

Wild Christmas cacti hail not from the desert, but from mountainous forests in Brazil, and are epiphytic, for the most part hanging out on the limbs of trees with their little orchid and fern and moss buddies instead of rooting into the ground.  The environment is cool, shady and humid, and as with many tropical areas, there are pronounced differences between the wet and dry seasons.  So in pots they are grown in an organic soil mix (not a sandy cactus soil) that holds moisture but drains quickly, like an orchid mix. They tolerate some drying out but they need more water than the typical cactus.  Their soil must be allowed to dry to the touch between waterings or the stems have a tendency to rot off at the soil line.   They should be placed in a bright window but without intense, hot summer sun, and are quite happy to be put outside in the summer in a spot that has bright shade.

Christmas cacti are like mums and poinsettias, in that as days grow shorter and nights longer in the late summer/fall, the change in day length causes them to form flower buds. (This is called a photoperiodic response.)  This works best when the night temperatures are between the low 50’s and high 60’s.  It needs to be dark for at least ten hours, but the plants still require normal light during the day.  This takes a minimum of three weeks, but you’ll have more blooms if you have the dark nights for six weeks.  I leave mine out on the deck until early October or when I hear the nights are going to dip into the forties, then I bring it inside, put it in a bright window in a seldom-used room, and sort of forget about it until it starts to bloom, at which point I triumphantly carry it to a place of honor.  If the night temperatures are in the 50’s the plant will also form flower buds, regardless of the day length, but for most people that is hard to achieve in the house.

This all sounds harder than it is.  Just think bright cool window in a room that is dark at night, and everything should happen on its own.  That’s the secret of Patricia’s blooming Christmas cactus in her office.