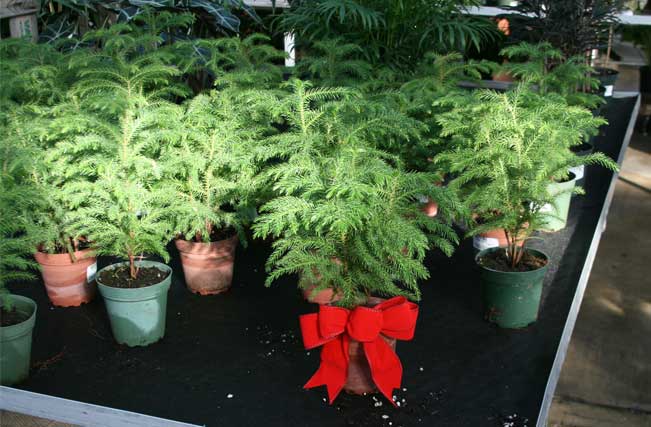 It’s a houseplant.  It’s a Christmas tree. No, it’s a houseplant and a Christmas tree!  It’s the Norfolk Island Pine: it doesn’t come from coastal Virginia, and it’s not a pine.  Norfolk Island is off the coast of east central Australia, northwest of New Zealand, and southwest of Fiji: that is, in the tropical South Pacific.  It looks piney with its horizontal branches and needles, but is actually a member of a much older family of plants, one that was found worldwide when the dinosaurs were top dog, so to speak.  Dino Chow for the brontosaurus.

Norfolk Island Pine, Araucaria heterophylla, is found in the wild only on Norfolk Island.  A closely related plant, the Cook Pine, has a wider distribution.  Apparently the two are used interchangeably in horticulture, and are hard to tell apart until they are quite large, so I’ll just use “Norfolk Island Pine.” It’s used as a landscape tree in many areas of the world where it doesn’t encounter freezing temperatures: California, Australia, the Caribbean, Hawaii…With its tall growth and narrowly pyramidal form, it’s very dramatic, even a bit jarring at times, like one of those cell phone towers that is disguised to look like a tree.

It makes a nice little indoor Christmas tree, available in sizes that are perfect for the desk, or big enough to use as a dramatic floor plant.  You may string it with lights, but the branches are weak and will support only the lightest of ornaments without drooping.  It often comes with a bit of glitter applied to give it that additional holiday sparkle.

Being a plant that grows outdoors in full sun is a clue that it needs good light indoors; it should be directly in front of a window.  Over time, the branches may become more droopy as they adapt to trying to make the best use of light coming from the side instead of from above.  To keep it symmetrical and growing straight, rotate the plant a quarter turn about once a week or it will bend toward the light.  (Over the course of a month, all four sides of the plant will be directly facing the window for a week.)

Since your little tree would be happiest in balmy coastal ocean breezes, it is going to be happier in a room/home with a humidifier in the winter.  Allow the soil to dry to the touch before watering, and never let the pot stand in water in a saucer.  Fertilize in spring and summer with a balanced fertilizer like Jack’s Classic All Purpose or Espoma Organic Gro-Tone.

When unhappy—not enough light, too wet, too dry—the plant will subtly signal its distress by having its lower branches fall off.  Ouch.  They are also subject to the usual repertoire of houseplant insect pests.  Mealy bugs (little cottony-looking sap sucking insects), scale (little helmety-looking sap sucking insects), and spider mites (almost microscopic spidery-looking sap-suckers) are the most likely.  If mites show up, it will usually be when the air is dry in winter; the plant will look off color (no joke!) and if really infested, you might even see spider webs.

If you’d like to grow a Norfolk Island Pine, the best selection is in December.  It’s the best choice for an indoor tree, for Christmas or any other time of the year.  There’s really nothing else like it.