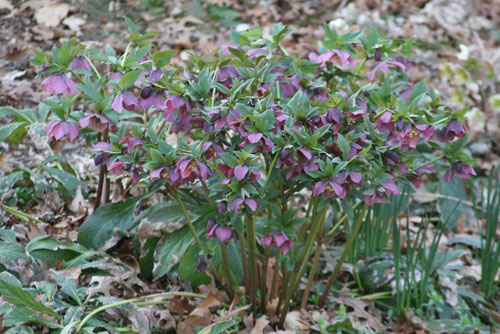 (reposted from a previous garden newsletter)

Growing up in Frederick, Maryland, we had a white Christmas fairly regularly. These days in the Washington metro area, forget it. Snow doesn’t stay on the ground most years until January. That being said…why not deck your yard for Christmas with plantings?

Obviously, pansies and winter cabbages/kales are “normal” winter plantings, with very little of the holidays about them, I really don’t like most winter cabbages, but consider pansies indispensable for the garden. Set out in late September, as soon as the weather cools, they will bloom all through the Fall (barring Bambi), all through the Winter except for the hardest cold snaps, and then all through the Spring. I grow my pansies in a brick walk, instead of a flowerbed.

My brick walks were laid in a herringbone pattern, not diagonally but straight along the direction of the walk. After every one and a half bricks along either side of the walk, there is a half brick deliberately left missing and filled each Fall with a pansy plant. As the walks have a raised railroad-tie edge, the plants are quite protected from wind and bloom like fools, with essentially no care.

But that’s not my subject. Here I’m talking about things specifically for Christmas. There are all sorts of things that stay green at the least, and even some that may flower. Hellebores of almost all sorts stay green in the winter. If you want holiday blooms the only one that would possibly oblige you is the Christmas rose, Helleborus niger, and only in a freak year.

Most of the others are early-Spring bloomers. But they do stay green. They range from the large, toothed leaves of H. x orientalis (the easiest), to the taller but finely dissected H. foetidus, and the subtly variegated hybrids with H. argutifolius in their ancestry. Wintergreen, sold potted for the holidays, is prettier outside than in. Try some. It has berries like little half-inch apples, of a fire engine red, on a plant maybe four inches tall and a deep green.

If you are one that considers the little things, consider hardy cyclamen. Their leaves, green or marbled, will come up in the fall, stay through the winter, and die down in late spring. The flowers are just like the cyclamen you buy in the greenhouse — but the plants and flowers are tiny — at most four inches tall.

Cyclamen hederifolium, the most commonly available, is an Autumn bloomer, but others, including Cyclamen coum with rounder leaves, bloom in the early Spring, and occasionally in a warm spell in winter. Of greater size are the white-veined arrowhead leaves of Arum italicum pictum, which come up in the Fall too. A hard freeze will put the leaves down on the ground, but they will come back up when it warms. I am just getting to know other kinds of A. italicum, some with blotched/clouded variegation — these are available by mail, usually not locally.

Among ground covers, ajugas will stay fairly reliably green until the hard frosts of January, as will most liriopes and periwinkles. The native Allegheny pachysandra is a subtle thing of greens and browns, and several of the creeping sedums will, after their fashion, stay green.

You can get a few shrubs to flower — I have a Japanese pussy willow that will occasionally break bud before Christmas in a warm year, and Prunus mume, the Japanese flowering apricot, which comes into sporadic bloom in warm spells and is quite amenable to being brought into the house in a cold place, not hot and dry, to open its flowers. Similarly, we had an early witchhazel, Hamamelis vernalis (the brick red form) that opened its flowers for us in Frederick on any warm day after the New Year — and that in the lee of a north wall.

Most of the witchhazels you see are x intermedia hybrids, and bloom a bit later. (The payback is that their flowers are bigger.) Occasionally a winter honeysuckle (Lonicera fragrantissima) will bloom in the Winter, rather that waiting for March, as will the white forsythia. This last isn’t all that showy, but it is fragrant.

You can plant berries that will last. Hollies go without saying. If you don’t have the space for a full-sized tree you can keep them in bounds with pruning. Hollies can stand quite a bit of pruning abuse, because unlike most evergreens, they can sprout from old wood. English, American, and hybrid hollies are available that bear red, orangish or yellow berries.

Plain green or variegated leaves. Spiny or not so spiny. Some will stay relatively small. Most hollies come in male and female, and you need one of both to have berries. However, if you see an English holly with berries in your block, you can plant one too because there is a male doing the duty somewhere nearby.

The same goes for American holly. Failing that, get Ilex ‘Nellie Stevens’ — it can berry without a male. Skimmia japonica looks like a three-foot, spineless holly, but the berries (on the female) are much larger. Beautyberries are great — also large; plant with caution because they do grow. Their lavender berries will last through the new year. I don’t care as much for the white-berried ones — they tend to burn brownish in the hard cold. I can also recommend Kerria japonica in all its forms for its wonderful, jade-green stems in the winter, and the various colors of “twig” dogwood.

And I really have to plug a daffodil called ‘Rijnveld’s Early Sensation.’ It is a King Alfred-type daffodil, and small. They are inexpensive and available in season by mail, and we occasionally carry the dry bulbs in the Fall at Behnke’s.

I end this Christmas article with a plant straight out of legend —Crataegus monogyna, and within that species a plant from a specific source — the Glastonbury Thorn.

According to the legend, when Joseph of Arimathea came from the Holy Land to spread Christianity to Britain (and some say also, bringing with him the Holy Grail) he landed at Glastonbury on Christmas Day, chunked his staff into the ground (who hasn’t done this with a shovel, to keep it handy) and asked God for a sign that he was doing the right thing. The staff promptly rooted, budded and bloomed. There has always been a thorn at Glastonbury descended, by tradition, from this thorn. And you don’t have to go to England to see one, either.

At the National Cathedral there was a thorn raised from a cutting of the Glastonbury thorn. (Thorns are, by the way, normally grafted; for something supposedly associated with holiness, they are devilish hard to root.) It lived for many years, and then died, but not before cuttings had been taken from it to the West Coast, and one brought back and planted.

That cutting, now a tree, survives to this day, and two or three living cuttings have again been taken and rooted at the Cathedral. Like the original, it is supposed to bloom on Christmas Day, which is a bit less likely here than in England, as our weather is a little colder. The thorn at Glastonbury, however, has been observed to have bloomed on Christmas day, and in the presence of English royalty.