This was written several years ago, so certain references like “lack of snow cover” may sound a little odd. Overall, the information is still good. [Editor]

The warm weather of the previous weekend perked up both the garden and the gardener, as I ventured outdoors to do some projects. The foliage on many of the “evergreen” perennials burned this year, due to the cold weather in January and February combined with lack of snow cover.

I trimmed the Epimedium to the ground, in anticipation of its April flowers, and cut the old leave off of the hellebores. Some years the hellebore foliage looks pretty good right into late spring, but this year, there was some edge burn. Easily taken care of by just cutting those old leaves off at the ground while being careful not to cut the new leaves and flowers emerging from the center of the clump. Hellebores are the glory of the garden this time of year.

Helleborus niger, the “Christmas Rose” and its hybrids bloomed early season. One clump was in bloom at Thanksgiving, and its white flowers have now aged to a bright rose pink. Another has been in full bloom with white, waxy blooms for the last month. It’s amazing that, even with nights dropping down to 10 degrees, the flowers were not injured.The Lenten Rose, Helleborus x hybridus, pushed up new growth and some have been open for about a week, with pink, red, and other assorted colors. ‘Red Lady’, in my garden now for three years, is very vigorous, with deep purple-red new leaves and flowers getting ready to open. 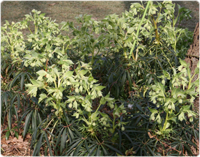 The “Stinking Hellebore,” H. foetidus, has narrow green leaves that were unaffected by the cold, and chartreuse-yellow flowers borne at the top of the stem. They are subtle but attractive in groupings. I love the common name; a Google search also lists a common name of “Dungwort.” (Ouch!) I don’t find them offensive. Famous perennial plantsman Allan Armitage says that they smell a little rank if you really get close to the flower, and you probably would not want to use them as a cut flower.

Hellebores are poisonous to people, and are deer-resistant, although they (the deer) aren’t above biting off a few flowers and spitting them out. They do best here in bright shade; morning sun makes them quite happy.

We have an assortment of Hellebores at Behnkes. They will take some frost, but should be protected if nights drop into the low 20’s. By next winter, they will take whatever comes our way.