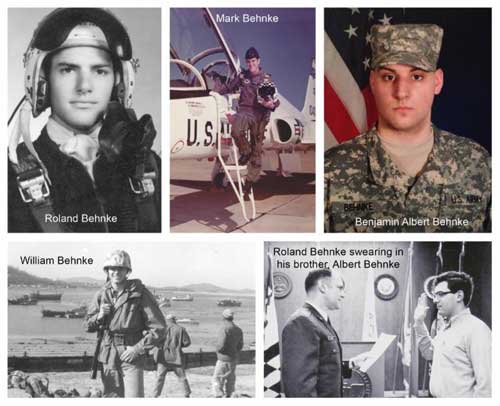 Honoring All Those That Served

Memorial Day is when we remember and honor those who are serving and have served in the United States armed forces. I was asked to re-share what I wrote last year about the men in our family who served.

When I was a little girl, my grandmother, Rose Behnke, had a very large map on the dining room door of Vietnam. She would mark where Uncle Roland had been while flying C130’s. He would also send us eight-track tapes (on large reels) with wonderful recorded messages home. In his early years, he helped with the Behnke business. He entered the U.S. Air Force through the Aviation Cadet Program in 1953 and graduated with the class 55-Q.

His first assignment was with the Strategic Air Command as a B-47 co-pilot in Lincoln, NE. Roland flew many planes during the course of his years in the Air Force including the C-119, T-39, T-6, C-130, B-25, and the C-47. He was awarded the Silver Star, Distinguished Flying Cross, and Air Medals for flights while in Vietnam. He continued his Air Force career until he retired in 1976. After he retired, he returned to Behnke Nurseries for many years, serving as President until he retired once again and moved to St. Mary’s with his wife Ele. *Update: My Uncle Roland passed away, January 10, 2010, and is missed very much by all of us.

Uncle Will joined the United Stated Marines when he was 18. He went to boot camp in South Carolina and then was stationed at Camp Pendleton in California. From there he was deployed to South Korea and served until 1957. After leaving the marines he returned to California where he still lives with his bride of 50 years, 5 children, and many many grandchildren. The photo above was taken in December of 1953 or 1954 in Korea, Inchon Harbor.

Uncle Albert joined the United States Air Force and served from 1971 to 1975. He was stationed in England. His brother, Roland had the honor of swearing him into the Air Force.

Then there is my cousin Mark Behnke (Roland’s son) who joined the United States Air Force in  1989. Mark flew the AC130 during his time in the military, and then also returned to Behnke’s where he set up our I.T. department and was later President of the company. He is an aerospace engineer and lives in Maryland with his wife and 3 children.

My cousin Carl Behnke’s son, Benjamin Albert Behnke, (Roland’s grandson) joined the United States Army 2 years ago. This past year he has been stationed in Iraq.  *Update on Ben Behnke May 2021:  Ben has been in the Army now for almost 8 years, & will be finishing his commitment this fall. He deployed to South Korea, and then was transferred to Ft. Wainright in Fairbanks, AK. He deployed to Iraq again. He returned to Ft. Wainright in July of 2020

We are all so very proud of Ben and all the other men and women who serve our country.