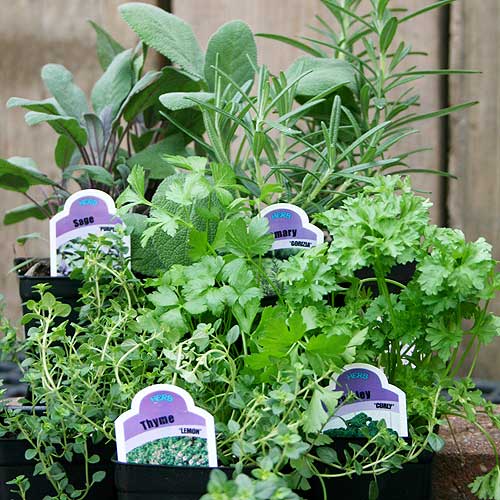 “Are you going to Scarborough Fair? Parsley, sage, rosemary and thyme.”

Those two simple lines bring back many fond memories for me and probably many of you. Every Tuesday morning Behnke’s buyers meet with the marketing team to finalize what we want to feature in our upcoming sales flyer. As the first shipment of fresh herbs will be arriving mid-March, it was suggested that we select an assortment of varieties to place on sale for our garden club members. The refrain of a song rang out from several of our more mellifluous employees, prompting me to research ‘Scarborough Fair.’

This song mentions several species of herbs as well as their meaning. The author of this traditional folk song is unknown, and many different versions exist. In Medieval England it was a popular song that the bards would sing as they traveled from town to town. American singer/songwriter Paul Simon learned of this song while on tour in England (also traveling from town to town), and decided to adapt it, mixing it with a second song called Canticle by his musical partner, Art Garfunkle.

From Songfacts.com: “Scarborough is a small town on the coast of England. The ‘Scarborough Fair’ was a popular gathering in medieval times, attracting traders and entertainers from all over the country. The Fair lasted 45 days and started every August 15th…Today, Scarborough is a quiet town with a rich history.”

The song tells of a man one who misses his lover and wants to be with her. He inquires of a friend if he is going to the fair, and to seek his former love to ‘remember me to her.’  Several what-seem-like-impossible tasks are demanded from the lovers in order to be together.

The herbs are included in the song in reference to the strengths they were thought to possess at the time. Parsley was comfort, sage was strength, rosemary was love and thyme was courage. (Rosemary also appears in Ophelia’s death scene in Hamlet, when she says, “There’s rosemary, that’s for remembrance.”)  I found so many interpretations of the song’s meaning that it was difficult to settle on one. The song is still one of my favorites, as sung by Simon and Garfunkel.