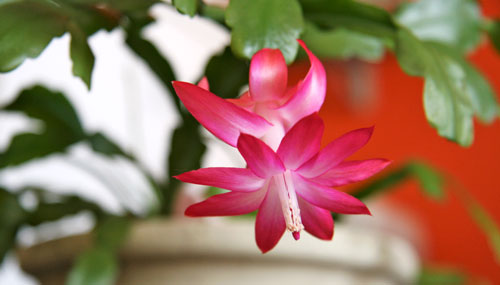 Let’s remember the plants of Christmas past. They aren’t with us the way they used to be. The reason? People’s houses then were cold, by our standards. Early houses had fireplaces—the earliest had huge, walk-in hearths—which did triple duty in cooking, washing, and heating the room. The open fireplaces sent huge quantities of heat up the chimney, rather than into the house. In the 1700’s, stoves started to come in, and the houses could be heated more efficiently. Furnaces came in by the late 1800’s, but windows were uninsulated—ditto the walls and roof! (They used far less light than we do, too. More later.)

People thought nothing of this; it was the norm. They just wore more clothing. But these conditions—not freezing but cold by our standards—let them do a lot of things that we find hard today. They kept all sorts of plants in their windows, which tended to have nice deep sills. Things like primrose, cyclamen and gardenia were very popular, because these plants need cool night temperatures and a fair bit of temperature change between the day and night. They forced bulbs more easily, because the bulbs were not blasted by our hot, dry air. The average cooler house of yesteryear had far more humidity. As a general rule, the plants that were favorites then were favorites because they did well in those conditions.

“Let the windows be well stopp’d up at night, so that water does not freeze, and there needs no fire.” (Advice over two centuries old)

Some plants, such as geraniums, survive today. They can take the dry heat; they were desert plants to start with. But the Christmas cactus, for example, needs a cool-night temperature, or failing that, a long period of darkness, to set bud. Lamplight across a warmer room wasn’t enough to mess with their little green minds, but electric light is. The best place for a Christmas cactus is, in fact, an unused room that you don’t go into very much. (Quite a few orchids, by the way, also like a day-night temperature change.) They could have roses in sunny windows, and gardenias too. Gardenias will take night temperatures down into the high 50’s without dropping their buds—but in a modern house, drop they will.

People— including my own great-grandmother, in Adamstown, Maryland — grew citrus trees, orange and lemon, in large tubs. Down they went to the basement for the winter, and stayed dormant. More affluent people put them in rooms with large south windows, and they did not go dormant. The trees did very well in the cold. Often there was a bay tree or a pot of rosemary upstairs on the windowsill.

These will dry out at the drop of a hat nowadays. And to add a nasty non-holiday note, you will find that a hot, dry house encourages the spread of spider mites and/or mealy bugs. Give your plants the occasional mist or a shower right in the tub to stave this problem off, this is a crutch not a cure, and consider putting gravel in their saucers or trays to let a little water stand in without rotting their roots off.

The grizzled of pelt among us, of my age and older, will remember Christmas greens lasting longer. This isn’t just a reminiscence — with forced air heat things dry out quicker. If you have the time, take your Christmas greens and mist them or lay them in water for an hour or so on occasion. You can also give greens a misting of Wilt-Pruf, which cuts down on transpiration of moisture into dry air. You can’t untrim your tree and do that to it—but you can make sure that its pan of water is full at all times. And, with a living tree, try to lower the temperature of the room.

Outside and in, we trim with greens. Henry Mitchell (whose columns for the Washington Post have been reprinted in three books, The Essential Earthman, One Man’s Garden, and Henry Mitchell On Gardening—these are must-reads) in his time mentioned five generally accepted “traditional” greens—rosemary, bay, holly, ivy and mistletoe. He personally considered yew, box and juniper “equally necessary.” Odd, very odd, that he did not mention four others, mainstays around here, pine, spruce, Magnolia grandiflora and crowsfoot. And occasionally you see wreaths and swags of mountain laurel used. Most of these greens will last longer with lower temperature and more humidity — even the greens used outside will benefit from the occasional sousing-down, and/or a bit of Wilt-Pruf applied after the soaking.

Your great-grandmother would have had fits at the very idea of a throw-away plant.

We still trim our houses, but we tend to use things like poinsettias which are bred and greenhouse grown for modern conditions. We couldn’t grow these ourselves. (You can bring a poinsettia into flower. Put it in a room where there is no light between sunset and sunup. But let it get one good flash of light in the middle of the night, and pfui! It thinks it’s summer and cramps up, at least for that night. If you’re in that room with the lights on regularly, the thing will not color up.) And we buy holiday plants to throw away, because we can. Because the plants are there, easy and available. Gardenias, cyclamen and chrysanthemums are still here—but are grown to be thrown away after flowering.

Amaryllis are with us still; they are tropical bulbs with a waxy covering on their leaves, and take no guff from anybody. Let them flower, keep watering and fertilizing for the months it takes until the foliage goes yellow on its own, and your bulb will last longer than you will, and multiply. These days the mini-amaryllis are the rage. They take up less space, can be used as a centerpiece, and are very forgiving. These mini-amaryllis come from species that actually have been in general circulation for over a century, did you know? I had one in the late sixties, from my junior high school librarian; it had been passed along in her family forever. Thought I’d never lose it…gave away the babies…lost it. Rats.

We have filled the space our ghosts left behind. Orchids are popular nowadays, especially the forgiving, high-temperature ones like phalaenopsis. They are spectacular in the variations available now, and bloom for months. Other plants, like kalanchoe, have made the transition by being bred down to a better size and lots more colors. (An old fashioned kalanchoe is fire engine red and about two feet high.) Being succulents, hot dry air holds no terrors for them.

But… Would you like to try your hand at the things your grandmother had for the holidays? Make a cool spot in your house. It may be as simple as turning down the air flow or the baseboard in one room, and shutting the door; it may be rigging your curtains so that they can be shut at night with your plants between them and the windows. I have, in my own house, two rooms so shut off, and in them I can put forced bulbs and they last and last; in a still room, the fragrance is unbelievably good. I buy cyclamen for the holiday season and they bloom until April or May. Some of the orchids, the miltonias and the tiger orchids, like the cool. Overwintering plants like gardenia, brugmansia, and Christmas (Thanksgiving, Easter) cacti will thank you profusely. And you can enjoy the “ghosts” of Christmas past once again.