It’s not summer YET but when the heat finally comes, I’ll wish I could hang out in Randy Best’s cool hosta garden, shown above and in lots more photos here.  Around our Beltsville store Randy’s known as Mr. Hosta – not only because his garden is jam-packed with them but because he’s a true Hosta expert and breeder of new Hosta varieties. 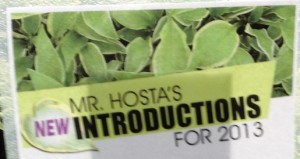 In pursuit of new, even more beautiful Hostas, Randy is always on the look-out and keeps up with what the other breeders are up to.  That’s how he came to find the 18 exciting new varieties now on offer in our perennial Department in quart-size pots.  Randy carefully selected these introductions and ordered them directly from a tissue culture lab (plant-geek talk for breeder) in Illinois.

Here’s how Behnkes’ Stephanie Flemming described the scene: “If Randy had a tail, it would have been wagging when the boxes were unpacked.”  Sounds like a true Hosta addict!

We have one flat of each of these cool-looking varieties, so come check out Mr.  Hosta’s Introductions for 2013 while supplies last!

I was once a small-scale collector of Hostas myself but had to give them all away after the deer arrived in my backyard one day and decided to stay – despite my repeated cursing at them and more sophisticated repelling techniques failed, too.

So last season, when the construction around my Greenbelt home was finally done in the late summer, I bought up several of my favorite varieties, including ‘Sir Frances Williams,’ the glory of my old shade garden (shown below in its formative years). Then over the winter I moved so many perennials around to accommodate the shrubs and trees I rather abruptly decided to plant that I couldn’t find Frances anywhere and declared him a casualty of gardening-in-winter.

Until I finally found him a couple of weeks ago, behind and almost under a teak bench I’d also moved.  I bet Mr. Hosta can appreciate what a thrilling discovery it was. Frances now has a prominent and perhaps even permanent spot in my garden, along with some new favorites.  Ah, to have a deer-free garden again! 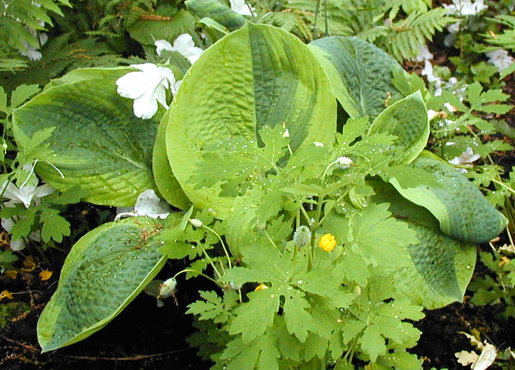