Miri Talabac, Behnke’s tree and shrub buyer, has been known to play favorites with the plants in her department, so I asked her to name her top picks for fall color. Her answers may surprise you. 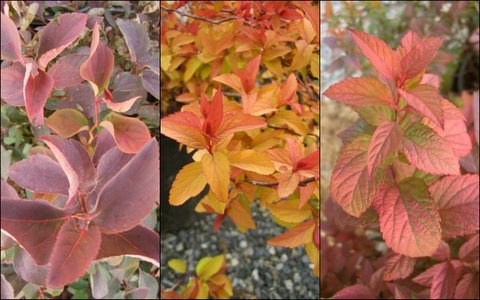 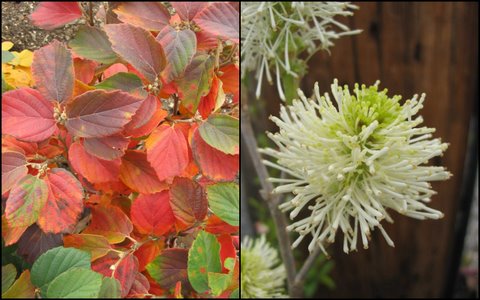 Fothergilla
According to Miri, “Both Fothergilla gardenia and Fothergilla major have great colors in a mix of burgundy, red, scarlet, orange and yellow.  One or two of ours are changing now, with the ‘Blue Shadow’ variety still holding its wonderful bluish summer leaf color.   They’re native to the region (a wee bit further south or into the mountains, I think) and have great multi-season interest.”  Here you see Fothergilla ‘Blue Shadow’ at the U.S. Botanic Garden and on the right, in flower at our nursery. 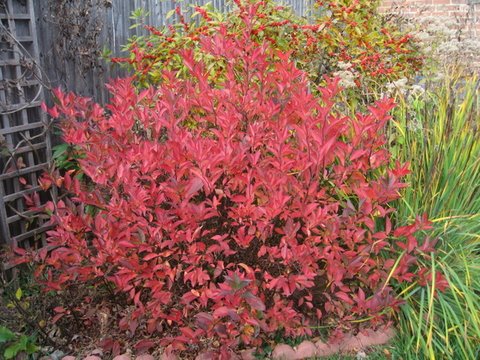 Itea (Virginia Sweetspire)
Miri loves Iteas for their wonderful reds, oranges, yellows and burgundy – on both ‘Little Henry’ and ‘Henry’s Garnet’.   She gives it bonus points for being native and having multi-season interest with the spring flowers.  In the photo below is a ‘Little Henry’ in the garden of Alison Gillespie. 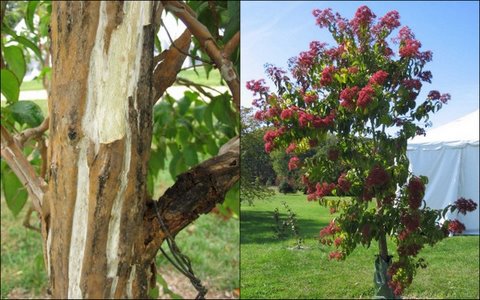 Heptacodium (Seven Sons Tree)
Finally, Miri names Heptacodium, something I’d never heard of.  She says it has small, fragrant white fall flowers, exfoliating bark, and rosy sepals until the leaves fall.   It’s like crape myrtle in its habit.  The photos below are of the Heptacodium miconioides, common name Seven Sons Tree.