The greatest flower show on earth, just up the road from us in Philadelphia, is over for 2014 and the reviews are in.  I wrote one myself over at GardenRant, which is tellingly titled – “Best Philly Flower Show Ever”. That was the assessment of Silver Spring-resident and long-time Flower Show volunteer and organizer Don Slater, who showed me his favorite parts of this year’s show and which I shared in that GardenRant post. 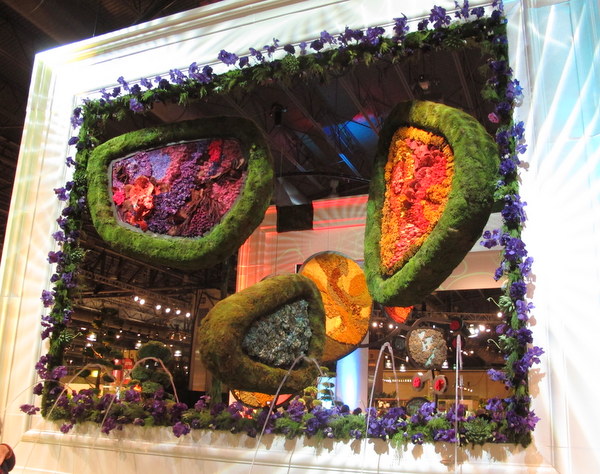 I’ve been to a handful of the shows myself and this was my favorite of the bunch, thanks largely to the commentary by Don (because I don’t always read the signs – my bad!).

It may be that place-oriented show themes, like the recent Britain, Hawaii and Italy themes, don’t evoke as much creativity in the show’s displays as did this year’s more abstract theme – ARTiculture, the convergence of plants and art.  I loved how designers interpreted paintings in large gardens, on walls, in vases, and more, with the huge Calder-inspired floral mobiles at the entryway getting visitors in the spirit of it all.

YET I heard from a neighbor who’s been to over 15 shows that this one was her least favorite.  I wonder if it’s because she looks forward to getting ideas for her own garden at the Philly Flower Show, in which case this year’s would clearly be a disappointment. It definitely wasn’t a try-this-at-home kind of show, and next year’s may not be, either – the theme in 2015 will be plants at the movies.  But I’ll be there! And Photographed.

Kathy Jentz (of Washington Gardener Magazine) has a terrific and large collection of show photos right here. She was tour guide/leader for a busload of show-goers who left from the Behnkes store in Beltsville.

There’s a great collection of photos here on this Philadelphia website.

I love this – not photos of the show itself but other photos on the theme of ARTiculture on Pinterest.