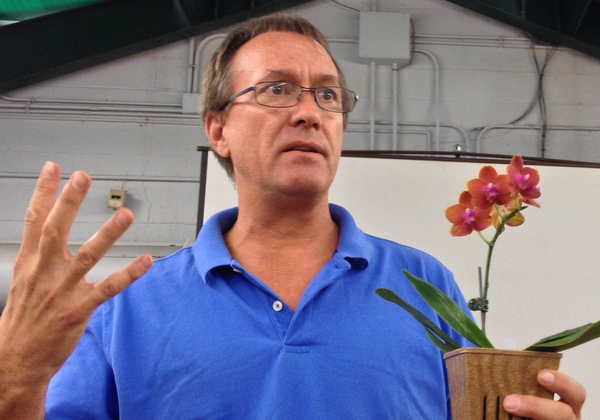 I think I can speak for everyone at Behnkes – we loved hosting the National Capital Orchid Society’s big show last weekend, and many of us took the opportunity to attend the talks.

Because I know nothing about orchids, I attended Ken Meier’s talk for people just like me, and now know enough to give this plant group – the largest of all plant groups, he told us – a try.  Ken is a past president of the Orchid Society and also grows and sells them.  (Here’s Ken’s quick tip about that:  Do you know how to make a million dollars selling orchids?  Start with $2 million.)  He’s also judges orchids at shows like this one, a position that takes seven years in the trenches (or greenhouses) to attain.

Choosing Orchids by the Amount of Light you can Give Them

If the best light you can give an orchid is a north window, buy one of these gorgeous clay orchids and it’ll be fine.  Just dust it occasionally.

If you have bright indirect light, Slipper orchids will do fine. They love to be repotted, even when they’re in flower.

And Phalaenopsis orchids are a great starter plant.  They tolerates early morning direct light, but want bright light all day.  You’ll know that they’re receiving too little light if they become a darker, deep green.  The blooms last the longest of any type of orchid – months!  Though for an avid orchid-grower like Ken, duration of bloom isn’t everything – the blooms of his absolute favorite orchid last just three days.

Oncidiums like some direct light and in summer Ken puts his outdoors in a protected area (so they won’t be rained on) and definitely not sitting on the ground (which would encourage pests).  An east-facing porch is perfect.  Then when the temperatures drop to 50 degrees out, he brings them indoors.   Let them get slightly dry between watering and always remove flower spikes after flowering – because they won’t bloom again on the same stalk, anyway.  ‘Sharry Baby” is one of the most famous Oncidums – it smells like chocolate.

Cattleyas are famous for their use in corsages, though now Cymbidiums are more popular in that role because they have as many as 12 flowers on a spike, versus just six on Cattleyas. They come in a huge array of colors and now sizes, too, including many smaller ones that are perfect for window sills.  The flowers last three to four weeks and some varieties bloom two to three times a year, typically the smaller ones.

Dendrobiums need south-facing windows and definitely need to be put outdoors in the summer.

Cymbidiums need similar sites as Vandas – give them as much sun as possible without burning the leaves.  Bring them indoors after the first frost (not freeze).  They’re often brought indoors too soon, Ken told us, and that can lead to them not blooming.  Unlike most orchids, they shouldn’t be repotted every year but when they are, you’ll need to cut the pot off because the roots can’t be untangled.  Most Cymbidums become huge.

Care and Feeding of Orchids

Repot!  Ken named repotting as the first-, second- and third-most important thing to do for orchids.  Do it when the flower is done, then every year thereafter.  If they’re not repotted, bacteria and fungi break down the growing medium and then go on to kill the plant.  (“If you don’t repot, it will rot” is a common warning.)  If the plant still fits in the pot it was in, use it again; if not, go to the next larger size.  Use only purchased bark – Sequoia mostly – never bark from your yard.  (Orchids aren’t the only houseplants that need regular repotting; Ken says that African violets grown for show are repotting every three months!)”

Choosing containers  Ken likes clear plastic pots for several reasons.  You can lift them to determine if the plant needs watering, while with heavier clay pots it’s harder to judge that way.  Also, roots tend to attach to clay and then are damaged in the process of repotting.  If you don’t like the look of plastic, the pot can simply be put inside a more decorative one.  Clear plastic is especially useful because you can see what’s going on inside, and they also allow light to reach the roots, which Phalaenopsis orchids especially like.

Watering  If in doubt, don’t.  Orchids have reservoirs of water, so they’re forgiving plants.  And never spray them – that causes spots on the leaves and flowers.

Feeding  Ken recommends feeding with a weak solution every time you water (1/4 the recommended dosage).  To save on fertilizer, water thoroughly first, so that it drips out the bottom, and then water with the small amount of fertilizer in the water.  Any all-purpose fertilizer will do – 10-10-10 or 15-13-12 – as long as it contains all three major nutrients.

Treating pests.  Horticultural oils for houseplants are best.  Ken recommends spraying with one at the time of repotting, spraying all parts of the plant, including the roots, before repotting.  But don’t put the plant in the sun right away until the soil has completely dried, or the oil will burn the plant.

Cutting off flower spikes?  Some people don’t do this, in hopes of getting another flower on the spike, but Ken removes finished spikes completely because he likes flowers on their own spikes, where they have a more natural form.