The discovery of an active nest is one of those unexpected treasures you can’t possibly script. As observant as one may be, or as familiar as you are with your yard, a nest may appear in the most unexpected places and/or return to some of the predictable locations in your garden. I can’t remember a summer within the past five or so years when I haven’t had at least one nest in the juniper tree and another nestled in the hollies. The nests are strategically located behind a thick tangle of prickly leaves, using a brick wall to provide added support on one side with strong branches from these mature nests as the nest’s “cradle.” Every spring I watch the birds in my yard and inevitably, they lead me to where they are building a nest. It might be the initial days of summer, but nests are being discovered all the time (and many birds built lay another clutch of eggs in the fall) and the Internet is flooded with magnificent discoveries. Nests can be discovered on the ground, in bird houses, within the cavity of a tree, constructed in almost any discarded object, in chimneys . . . you name it: become aware of the possibilities and soon you, too, will start looking for nests.

Early in the morning, sometimes before we “Spring Forward” and change our clocks in preparation for the summer’s months, I wake to the gentle cooing of the Mourning Doves. Before I begin the summer routine of touring the garden to check in on plants, see what’s growing (or not) and making a “to do” list for cleaning, planting and summer maintenance, I start looking for nests. This year started a little different initially – the first Mourning Dove of the season was spotted in the holly tree, subsequent ones were in the juniper tree and almost all were successful (we had one unfortunate outcome, courtesy of a tenacious predator). In the following months, continuing into “official summer” I continue to find nests. It’s a little unusual to find some nests as summer’s heat begins in earnest but for me, it’s not about the science of ornithology – it’s about the thrill of the Retweet. Finding nests, summer after summer, is a form of gardening for me. As much as I despise the juniper tree – it’s ungainly, prickly (and we all know I’ve got a “thing” about texture) and it’s starting to encroach on the sunny spots in the yard, making it difficult to figure out how to plant in my beloved Green Bed. But it’s a price I’m willing to pay because it has been home to so many nests. Importantly, it was home to the first nest which got me hooked on finding nests in the yard. As I walk past the scratchy, ungainly tree, I mutter to the tree “your only saving grace is being home to the plentiful, magical, amazing nests.” Grr.

And yet? Summer after summer, in 98% of the mourning dove nests built in the garden, I’ve been treated to the following (and I never tire of it – each nest is special, new and unique):

Last summer’s nest in the climbing hydrangea  full of sparrows, was an unexpected treat. I found it only because, while sitting in the kitchen, I noticed a lot of sparrows diving in and out of the climbing vines and after a few days, when the activity began to slow down, I casually walked by the climbing hydrangea and glanced into the tangle of leaves. Sure enough, there it was – a sparrow’s nest. Each egg was the size of a marble and I couldn’t imagine how they would hatch, hold the weight of an adult and the hatchlings: 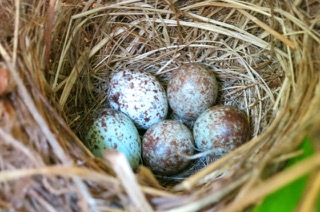 With Cornell’s NestWatch program, I not only got information about the occupants (notice how one egg is different – a Cowbird dropped an egg in there and was lucky enough to have it nurtured by the sparrow) but I registered the nest so they could get information about bird populations they ordinarily wouldn’t have access to. If you are at all interested in learning more about birds or want to participate in any of their “Citizen Scientist” programs, I strongly encourage you to visit NestWatch.org to learn more about their wonderful programs to become familiar with their Code of Conduct Guide so you can responsibly observe nests. By following their Code of Conduct not only do you enjoy the beauty of nature, you do so responsibly and have the opportunity to be the “eyes and ears” for Cornell’s ornithologists as they keep track of increasing and declining bird populations.  They also have incredible programs for educators and offer an array of outreach, educational and fun programs. Learning about how nests are built and why locations are desired for different species, understanding the adult’s behaviors (such as turning the eggs so they develop evenly), following expected incubation times and becoming familiar with what to expect makes the entire experience that much more meaningful.

As I sat in the kitchen with the morning’s coffee, camera nearby, this is what I had a front row seat to (notice the cowbird – it’s the one with the wide, flat beak). I thought it was a nest hog:

Four sparrows, one cowbird – all healthy, well fed and eventually, they fledged the nest. The nest is there but so far, although I’ve seen a lot of sparrow activity in the area, I haven’t seen another nest but I keep hoping. There’s nothing quite so wonderful as the surprise of a discovered nest – especially when it’s an active nest. That’s right, I’m waiting for a “Retweet.”

Just last week, as my early summer routine of touring the garden in the morning began, I was delighted to discover: 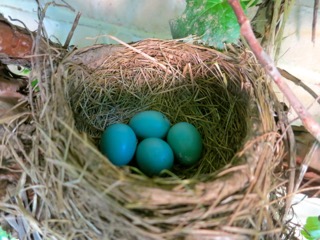 Sure, I’ve had plenty of robins nests previously and I know exactly what to expect. For now, I’m only checking, thanks to binoculars, on the nest from time to time to see if there’s a little more activity. A few summers ago, just as I was fortunate with the sparrow’s nest, I was able to watch robins hatch. I know it will go something like this:

But when/if it happens in the coming days, it will be like “Groundhog Day” as if I’ve never seen anything so remarkable before in my life. It is new and exhilarating every single time.  Each nest, every nestling is a precious gift. I’m just fine with “re-tweeting” and welcome the hatchlings arrival. It’s not too late in the season – next time you are taking a walk, visiting gardens and/or working in your yard, take the time to carefully look at unexpected places to see if there are nests. You would be surprised at their location(s). On the Internet I’ve seen nests built in mailboxes, discarded shoes in the yard, built on the ground, found in the cavity of a tree, nestled in an unused outdoor fireplace and typically, in the eaves on a house. When friends tag me on Facebook to show me their nest (in Cleveland, Debbie’s mourning dove nest was in a hanging basket of flowers she recently purchased at the nursery. So excited, she neglected the flowers to give the doves their space and although the flowers looked pretty spent, Debbie couldn’t have been more delighted to see the mother dove nestling her newborns. Another friend in Texas, Laura, found a nest filled with blue speckled eggs in a ficus tree she placed on her porch) I’m thrilled and share in their excitement.

It’s not just flowers that are blooming this summer – as your garden welcomes pollinators and appreciates their hard, important work, please keep an eye out for the treasure of finding a nest. You’ll be surprised by how attached you become to that precious cargo and how invested you become in the process. Please be a responsible nest watcher by following the guidelines so carefully explained on NestWatch and enjoy the show!