Summer is the season for long-blooming perennials. Spring perennials go in and out of bloom in rapid succession, bringing almost daily changes to the garden, especially when mixed with spring-blooming bulbs and shrubs. In the long, warm days of summer, everything seems to stretch out. Perennials in-bloom when you go on vacation are generally still blooming when you get back, especially after they have been in the ground for a couple of years and are established.

Summer is also the time for American native perennials. Most of the common spring-blooming perennials are from elsewhere, often alpine locations. In summer, the perennial flowers and grasses of the American meadows and prairies are well-represented in the garden, supplemented by non-native workhorses such as Perovskia, the Russian Sage (which sounds more like a character in a Chekhov play than a plant, if you are in the right mood), and Nepeta, the catmints.

Many of the summer plants bear yellow or golden flowers that look like daisies. That challenges the gardener to provide contrasting colors and form. Many of you are serendipitous gardeners who wander the perennial department, selecting blooming plants that strike your fancy (about 95% of you, we are told), and you shop most frequently in spring; thus, your gardens tend to be heavily weighted in spring-blooming perennials. We suggest you visit several times during the summer to see what’s “Blooming at Behnke’s.” This makes it easier to find a selection of different colors and textures for your summer garden.

Some thoughts on the claim “blooms all summer.” You frequently see this term used, and it can be misleading, beyond the fact that horticulturists sometimes, ummmm…exaggerate.

First, many plants have a longer blooming period further north, where the summer evenings are usually mercifully cooler and less humid than here, and where many garden catalogues, books and magazines are written.

Second: to encourage longer blooming, you may need to deadhead (remove spent flowers before they go to seed) or shear the plant back to encourage a second wave of blooming* —so you may have blooms throughout the summer, but not necessarily continually. Frequently, the initial bloom will be spectacular, and the re-blooms will be more sporadic or less showy; fewer or smaller flowers, perhaps the colors will be less intense due to summer heat.

Third: some perennials that flower their little green hearts out often die over the winter.  Scabiosa ‘Butterfly Blue,’ Gaillardia, and Verbena ‘Homestead Purple’ are examples. Either they don’t make proper preparations for winter, they need super drainage, they aren’t quite winter hardy; or a combination of factors. We call these “short-lived” perennials. They will give you a great show, are terrific in containers, but deep down they really want to be annuals. 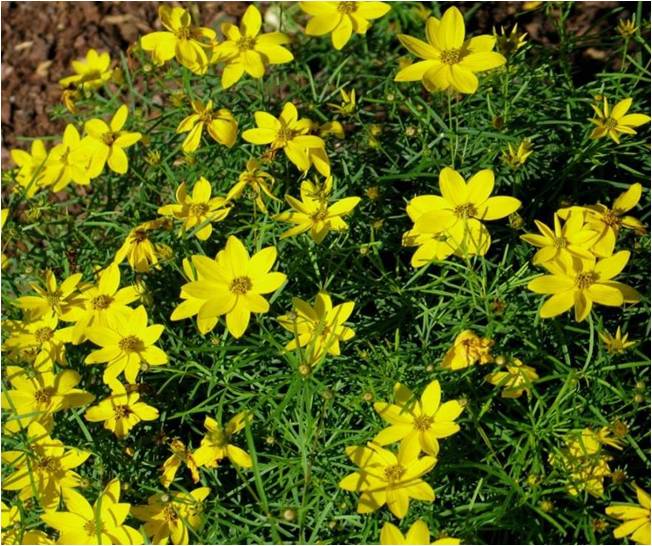 1. Coreopsis or Tickseed; originally pink or yellow daisies, plant breeders have added red, white, orange, and bicolors to the spectrum. They have a long-blooming period, starting in late spring to early summer, and continuing to frost. The old varieties required shearing for rebloom, but the newer ones are “self cleaning.”  (The old flowers fall off, and new ones continue to be produced.)   Some good rules of thumb for daisy-type flowers are that they generally perform best in full sun, and require good drainage. That certainly holds here: they often rot out in soggy winter soils.  Coreopsis are US natives; some are native to Maryland. 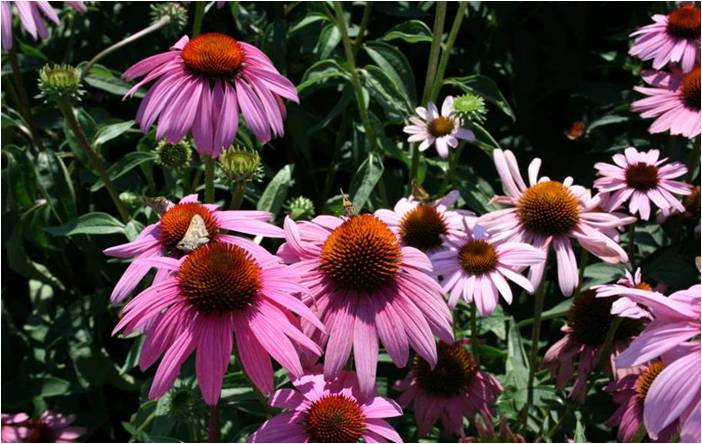 2. There have been many Echinacea varieties introduced over the last couple of years, extending the color range of this daisy-like flower from white and shades of pink into gold, orange, red and burgundy; with lots of double flowered forms, too. Purple Coneflower remains the common name. Like the Coreopsis they can be hard to get through the first winter. We recommend you remove Echinacea flowers the first year to allow the plants to focus on producing a stronger crown for overwintering.  Echinacea are native to US prairies and meadows. 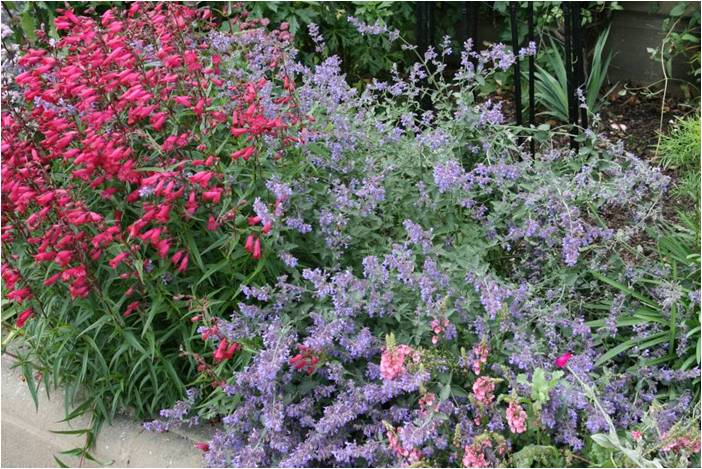 3. I’m fond of the Nepeta, or Catmints, and I am seeing them used a lot in commercial landscapes. They begin to flower in late May or early June, and will continue through the summer. Bees are fond of the flowers, and it being a close cousin to catnip, you may find that cats are romping in the garden as well. The blue-flowered ones are the best.  Not native. 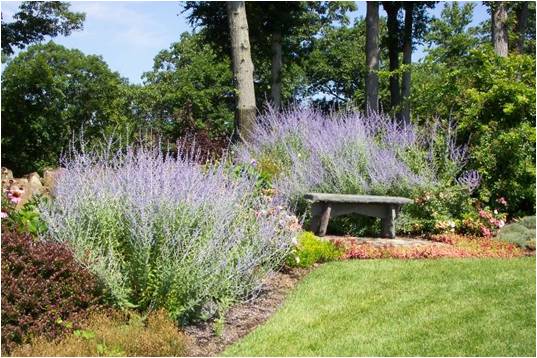 4. Perovskia, Russian Sage, bears spikes of tiny blue flowers beginning in late June and continuing to frost. The foliage has a strong medicinal smell when crushed. They are quite reliable and always look great with Echinacea. Keep them on the dry side and don’t give them much fertilizer; both encourage soft, floppy growth. 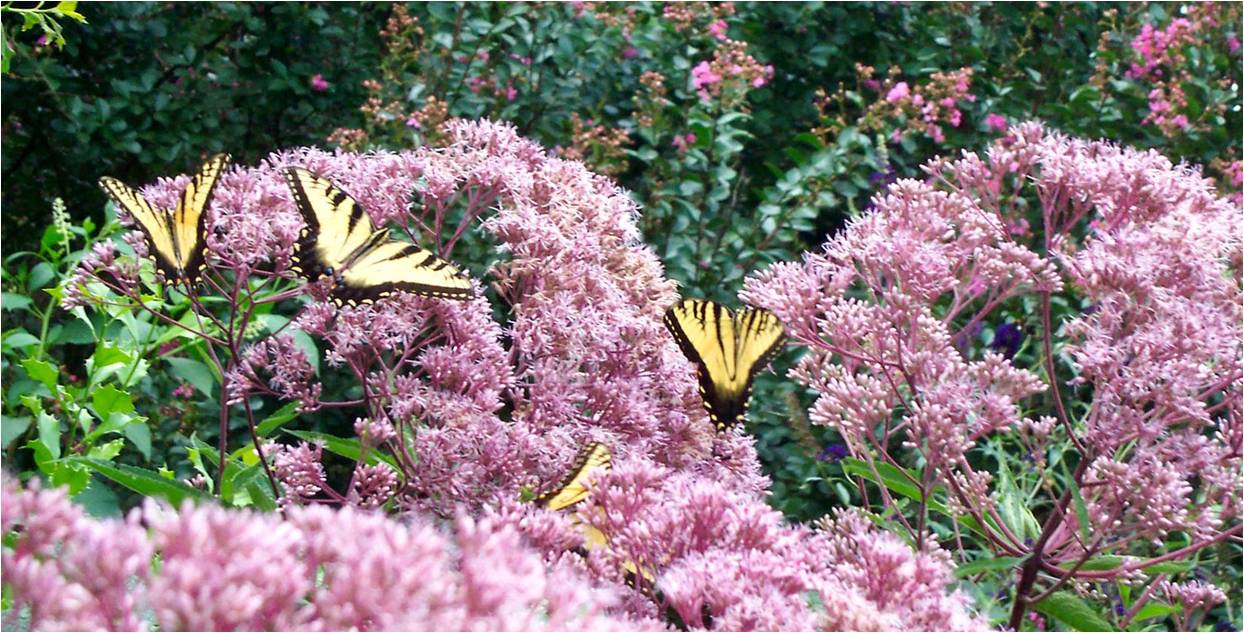 5. Joe-Pye-Weed is a real butterfly magnet. Some of the “Eupatoriums” (the old scientific name; you may also see them listed as Eutrochium) are too weedy for most folks, but some perform well in most garden situations; all are smaller than the species and all have dusky-rose colored clusters of flowers. The industry standard is Eupatorium maculatum ‘Gateway,’ which gets six feet or more tall. More recent introductions include Eupatorium dubium ‘Little Joe,’ which gets to four feet, and ‘Baby Joe’ which gets 2.5 to four feet. Flowering begins in July and runs into September.  Both species are native to Maryland.

Some take-home messages: enjoy your summer garden; extend your blooming season with judicious use of shears and pruners; stop by every few weeks to see what’s in bloom; and, plant natives as the backbone of the garden, accenting with carefully chosen non-native plants.

* Further information on this in Tracy DiSabato-Aust’s book, The Well-Tended Perennial Garden: Planting and Pruning Techniques, a must for all gardeners.